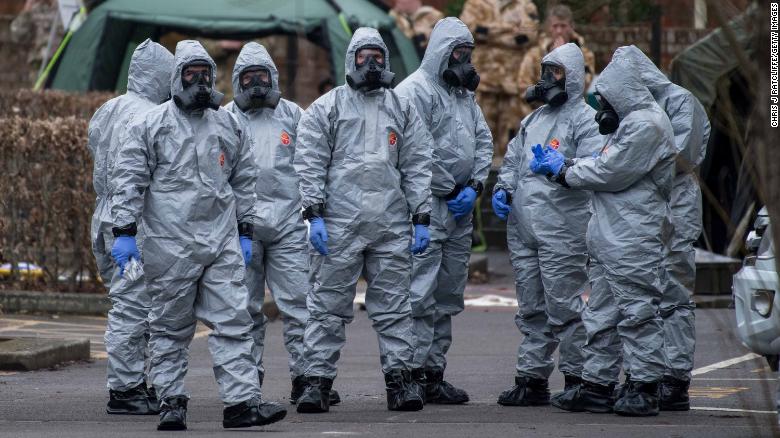 Above: Military personnel wearing protective suits investigate the poisoning of Sergei Skripal in Salisbury, England. CNN describes this photo as propaganda writing “If there was at no point any risk to public safety — as health officials insisted from the start — these images risked looking like they served a political purpose by making the threat seem severe and the military the required response.”

Note: There are many questions being raised around UK Prime Minister Theresa May’s claim that Russia poisoned to Russian emigre’s in Salisbury. The article below raises questions about the alleged poison used, Novichok, and highlights that the Russian scientist who claimed to create it, who now lives in the US, wrote a book described how to make it. Coincidently, the UK’s own chemical weapon laboratory at Porton Down is located only a few miles from where the incident happened.

The allegations come at the same time as Russia’s Defense Ministry says ‘US instructors’ are training militants to stage false flag chemical attacks in south Syria. The incidents are said to be a pretext for airstrikes on Syrian government troops and infrastructure. Finian Cunningham writes that it is just too much of a coincidence that the “smearing of Russia over the apparent poison-assassination plot in Britain is being used by Britain and the United States to push their desired military intervention in Syria to topple the Assad government.”

All of this comes at the same time that previous claims of President Assad using chemical weapons have fallen apart. Even Secretary of Defense Mattis admits there is no evidence that Assad committed any chemical attacks that have been previously alleged.

Former member of the UK parliament, George Galloway delivers bombastic video commentary on the murder of Sergei Skripal and his daughter. He asks the question “Who benefits,” always a key question in a murder investigation. Skripal was unimportant to Russia who included him in a prisoner exchange with the UK. Why would Putin order poison someone a week before his election? The obvious beneficiares are western nations like the UK and US who are escalating their attacks on Russia.

RT writes about the allegations pointing out that the US very likely has access nerve agent allegedly used writing “The New York Times reported that the US military was going to spend up to $6 million” to demilitarize the Chemical Research Institute where the chemist worked. They also point out it makes no sense for Russia to take this action: “Russian officials say the timing of the allegations is particularly notable. “Presidential elections are looming in Russia, and the country is accused of committing every mortal sin,” Sergey Stepashin, former FSB director, told Interfax. ‘Tell me, which idiot in Russia could carry out such [an attack]? Where is the logic [in that]?'”

CNN reports that the murder raises questions and concedes “there is no hard evidence” that the killing was ordered by the Kremlin. CNN seems to also find the allegation incredulous writing “But was this ordered at the highest level in the Kremlin? That is in an important question, and there is no hard evidence of that right now. Such an allegation means that Vladimir Putin, less than two weeks ahead of an election (that he will undoubtedly win), had ordered a public killing of a dissident that could really only be traced back to Moscow.”

They also report the victims were carrying the nerve agent with them “It is staggering, but a statement Sunday from health authorities effectively said the pair were in contact with — or carrying — the poison for their entire Sunday afternoon trip. Authorities found traces in the Mill pub and the Zizzi pizza restaurant, as well as on the bench where the two began to lose consciousness. This suggests that they perhaps carried the poison with them.”

CNN also points out a curious twist “A key question here is how was Detective Sergeant Nick Bailey given a larger dose than other first responders. He was critically ill, but is now recovering.”

Former British Ambassador Craig Murray has written that the British government continually re-uses the clumsy phrase “of a type developed by Russia” because its own scientists at Porton Down refused government pressure to say the nerve agent was made by Russia.

While there is a serious lack of evidence, the UK has expelled 23 Russians and the Russians labeled May’s statement a “circus show” and accused the UK of violating a chemical weapons convention by refusing to send it samples of the substance used. Russia expelled 23 diplomats from the UK in retaliation.

Russia’s U.N. ambassador Vassily Nebenzia told an emergency meeting of the U.N. Security Council called by Britain on Wednesday that “Russia had nothing to do with this incident” had nothing to hide and called for a joint Russia-UK investigation.

A comparable incidents happened in 2001 in the United States. Envelopes with Anthrax spores were sent to various politicians. Some people died. The White House told the FBI to blame al-Qaeda but the Anthrax turned out to be from a U.S. chemical-biological weapon laboratory.  The case is still unsolved.

The ‘whistle-blower’ Vil Mirzanyanov who ‘revealed’ the ‘Novichok’ program and its poisons published chemical formulas that should enable any decent laboratory to reproduce them. But neither the existence of the claimed program nor the existence of the alleged substances were ever accepted by the scientific community. The Russian government says it does not know the program nor the alleged poisons.

The highly constructed drama around the alleged poisoning of a British double agent Skripal and his daughter has thus turned into a surreal play. The British government has so far given no evidence that the Skripal’s were poisoned at all, or that they were poisoned by someone else. No detailed medical bulletin was published. The British accusations against Russia lets one assume that a suicide attempt has been excluded. Why?

There is no independent evaluation of the alleged poison. The British government claims that its own chemical weapon laboratory at Porton Down, only a few miles from where the incident happened, has identified the poison as one of the ‘Novichok’ chemicals.

But in 2016 a leading chemist at Porton Down had doubts that such chemicals exist. (Paul McKeigue, Professor of Statistical Genetics and Genetic Epidemiology at Edinburgh University, Piers Robinson, Professor of Politics, Society and Political Journalism at Sheffield University and the former British Ambassador Craig Murray pointthis out):

As recently as 2016 Dr Robin Black, Head of the Detection Laboratory at the UK’s only chemical weapons facility at Porton Down, a former colleague of Dr David Kelly, published in an extremely prestigious scientific journal that the evidence for the existence of Novichoks was scant and their composition unknown.

In recent years, there has been much speculation that a fourth generation of nerve agents, ‘Novichoks’ (newcomer), was developed in Russia, beginning in the 1970s as part of the ‘Foliant’ programme, with the aim of finding agents that would compromise defensive countermeasures. Information on these compounds has been sparse in the public domain, mostly originating from a dissident Russian military chemist, Vil Mirzayanov. No independent confirmation of the structures or the properties of such compounds has been published.(Black, 2016)

The Scientific Advisory Board of the Organization for the Prohibition of Chemical Weapons (OPCW) has not recognized Novichoks as chemical weapons because it found scant evidence that they exist at all. The U.S. and the UK are both part of the organization and both agreed with this evaluation:

[The SAB] emphasised that the definition of toxic chemicals in the Convention would cover all potential candidate chemicals that might be utilised as chemical weapons. Regarding new toxic chemicals not listed in the Annex on Chemicals but which may nevertheless pose a risk to the Convention, the SAB makes reference to “Novichoks”. The name “Novichok” is used in a publication of a former Soviet scientist who reported investigating a new class of nerve agents suitable for use as binary chemical weapons. The SAB states that it has insufficient information to comment on the existence or properties of “Novichoks”. (OPCW, 2013)

The former Soviet scientist, Vil Mirzanyanov, who ‘blew the whistle’ and wrote about the ‘Novichoks’, now lives in a $1 million home in the United States. The AFP news agency just interviewed him about the recent incident:

Mirzayanov, speaking at his home in Princeton, New Jersey, said he is convinced Russia carried it out as a way of intimidating opponents of President Vladimir Putin.”Only the Russians” developed this class of nerve agents, said the chemist. “They kept it and are still keeping it in secrecy.”

The only other possibility, he said, would be that someone used the formulas in his book to make such a weapon.

“Russia did it”, says Mirzanyanov, “OR SOMEONE WHO READ MY BOOK”.