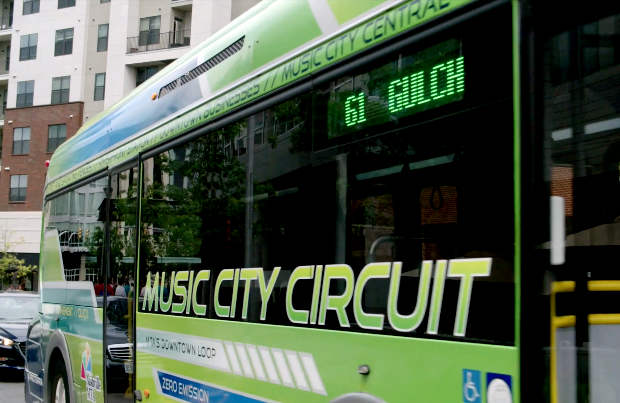 These City Bus Routes Are Going All-Electric ― And Saving Money

Above Photo: Nashville is one of several cities that have started integrating electric buses into their routes. The buses are more expensive up front but save cities money on fuel and other costs. Credit: Proterra

Two years ago, the Transit Authority of River City (TARC) in Louisville, Kentucky, bought 10 electric buses to replace its aging diesel fleet. The agency installed two on-route chargers, where the buses now stop to recharge in less than 10 minutes before continuing their downtown route. TARC officials liked the buses so much, they’ve since ordered five more.

A few hours to the south in Nashville, Tennessee, nine electric buses have been running fixed routes around the Music City since 2015. And across the country in Park City, Utah, the local transit authority recently purchased six electric buses to help reach a goal of a net-zero carbon footprint by 2022.

In all, 40 transit authorities in the United States have looked to Proterra, an electric bus manufacturer based in South Carolina and California, to help them transition away from diesel buses and toward a solution that can save cities money and lower their emissions.

Since 2004, Proterra has sold more than 400 buses to city transit authorities. The company has a waiting list of orders, and it recently opened a new manufacturing facility outside of Los Angeles that will employ 100 people and ramp up production to 400 buses a year.

It’s also pushing the envelope for what electric power might do for public transit. Last month, Proterra broke world records by test-driving an electric bus 1,100 miles on a single charge. The trip put the previous record for an electric bus―632 miles―to shame, and was more than triple the average mileage of a Tesla.

The test showed the massive potential for clean transportation in the U.S., said Steven Brewster, marketing and communications manager for Proterra.

“Once they see benefits of this―not only from the riders, but also from the maintenance perspective―they come back for a second, or third, or fourth [purchase],” Brewster said.

Catching Up with China and Europe

Part of the challenge is the upfront cost. A full fleet of electric buses is still too expensive for most U.S. transit authorities to afford in one purchase, but the sector is growing rapidly, driven by advanced technology, more manufacturers, and local efforts to slash greenhouse gas emissions, improve public health and reduce reliance on diesel and gasoline-powered vehicles.

Two overhead chargers along Louisville’s electric bus routes power up the buses during stops of less than 10 minutes. Credit: City of Louisville

Several manufacturers are expanding their reach in the U.S., including Chinese battery and vehicle maker BYD and Canada-based New Flyer.

Major automakers are also getting in the game: Volkswagen announced this month that it is putting $1.7 billion into electric buses and trucks in Europe, and Hyundai plans to launch an electric bus with a range of 180 miles in 2018. The global electric bus market is expected to grow 33 percent by 2025, according to a P&S Market Research report.

“There may not be a lot out there today, but there’s a lot of growth and potential for growth,” said Judah Aber, an engineer and co-founder of electric transportation consulting firm EB START Consulting. “Electric transit buses are definitely here: the technology exists, there are multiple manufacturers, there are many transit agencies that are working on it right now.”

How Electric Buses Save Cities Money

The average lifespan of a 40-foot diesel bus is about 12 years, or 500,000 miles. Replacing an entire fleet with electric buses is expensive―they cost about $300,000 more than diesel buses―but the research shows it pays off:

In 2016, Aber led a Columbia University study that calculated the economic and environmental potential for transitioning New York City Transit’s 5,700 diesel buses to an all-electric fleet. It showed that New York could save about $150,000 per bus just from the reduction of respiratory and other illnesses. It also showed that the city could cut carbon dioxide emissions across the fleet by 575,000 metric tons per year, and each bus could save about $39,000 per year in fuel and maintenance costs, in addition to the health savings.

This year, New York City Transit is working on a pilot program to roll out 10 electric buses to begin the transition.

Improving air quality and lowering public health costs were the key reasons Los Angeles’s transit authority, Metro, set a goal of converting its bus fleet to 100 percent electric by 2030. The agency recently spent more than $138 million purchasing 100 buses from New Flyer and BYD, and it expects to work with Proterra at some point in the future.

Kim Upton, a Metro spokesperson, said the first bus will start running next spring and two fixed routes will go all-electric by 2020. She said it’s still unclear what the exact cost savings will be, but Metro hopes that it will reduce healthcare costs from air pollution in Los Angeles, and that U.S.-based bus manufacturers will contribute to the local and national economy.

“Right now, it’s about the environment and moving transit agencies forward as the technology develops, and eventually it could be about saving money,” Upton said.

Hope, and Obstacles, for the Industry

As it expands its operations, Proterra is also developing technology to improve acceleration and horsepower for roads with steep grades in mountainous regions, as well as ways to ensure the most efficiency for rural and urban environments.

Even with this rapid growth, the electric bus industry is still in its nascent stages. “[Transit authorities] have to move very cautiously, because to make a change like this, they need to make sure that not only internal stuff works, but all of the interactions with the community and with government agencies need to work effectively,” Aber said. “It’s a big job to just to get to the starting gate.”

To make electric buses more accessible will require a significant price drop for batteries and buses. Proterra’s newest model, the Catalyst E2 max, traveled 1,100 miles with a 660 kilowatt-hour battery. The company’s standard Catalyst model has a 440 kilowatt-hour battery and can travel up to 350 miles per charge. However, most transit authorities don’t need that much range, so models with smaller, cheaper batteries that last 150 to 200 miles could be a more realistic option.

The prices of charging stations will have to drop, too. Electric buses can be charged in-depot or along their routes, and the long range avoids the range and charge anxieties that have held back electric car adoption. On-route chargers juice up faster and allow buses to be in service 24-hours a day, but they’re also much more expensive.

In addition to all the technical challenges, there’s still a lack of awareness among riders and local governments about the importance of public transit and electrification of transportation, some transit authority officials say. Louisville―like many other cities across the U.S.―is becoming more electric vehicle-friendly, but residents still aren’t utilizing public transportation enough to justify investing in more buses.

“The environmental benefits are there,” Goodwin said. “But we’re still trying to get the word out.”