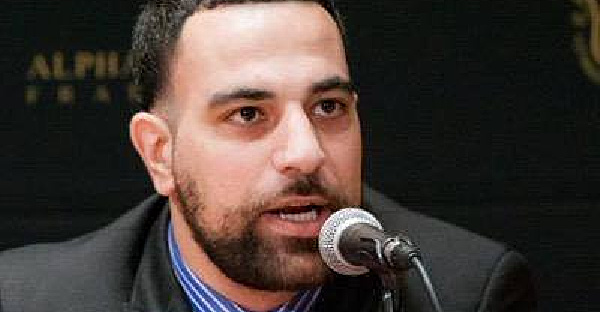 These Organizations Are Doing Critical Work to Advocate for Palestinian Rights’

Janine Jackson interviewed the US Campaign for Palestinian Rights’ Ahmad Abuznaid about Israel’s human rights crackdown for the August 26, 2022, episode of CounterSpin. This is a lightly edited transcript.

Janine Jackson: The UN’s High Commissioner for Human Rights stated that Israel’s designation of a number of Palestinian rights organizations as “terrorist” raised concerns that the designations were being used to “halt, restrict or criminalize legitimate human rights and humanitarian work.”

Ten European countries and, not for nothing, the CIA agreed that Israel has not presented sufficient evidence for that terrorist labeling—or the subsequent raids conducted, computers stolen, files taken, entryways taped up.

The groups’ legal appeals were dismissed with no opportunity to defend against the “secret evidence” against them. The Biden administration says it’s “concerned,” and that “civil society organizations must be able to continue their important work.” And that’s where it ends, evidently: hearts and prayers.

Some might find it notable that the overt harassment of Palestinian human rights groups happens within context of the recent series of airstrikes in Gaza that killed at least 46 people, including 16 children.

It’s important to know that the crisis of occupation isn’t a sometime thing, and that having fewer voices to hold and host debate around that will absolutely impact what happens going forward.

Ahmad Abuznaid is executive director at the US Campaign for Palestinian Rights. He joins us now by phone. Welcome back to CounterSpin, Ahmad Abuznaid.

Ahmad Abuznaid: Hey, thanks for having me, Janine.

JJ: Maybe we should just start with what’s been happening in Gaza recently. I don’t say that there’s been zero coverage, but quantity, in this case, is not so much the point as the quality of that coverage.

And I’m not sure how much context there’s been for the pieces that folks may have seen. Like, I saw a Washington Post reprint of an **AP** piece, “Gaza Militants Hold Parade After Latest Battle With Israel.”

So, given that context of US media coverage, what would you have folks know about just what’s been happening?

AA: Yeah, the first, most important thing I would share, for folks who are, I think, still gathering knowledge about the issue of Palestine, is to know that the people in Gaza have been separated and segregated from the rest of the Palestinian population because of a 15-year blockade imposed by the Israeli government.

And even when we use terms like “blockade,” it’s really important for us to help folks understand what that means. And so a blockade on the Gaza Strip means that Israel essentially controls everything that goes in via land or sea, and comes out via land or sea. And, of course, Gaza does not have an airport.

Furthermore, when you talk about the situation of the people of Gaza, you have to understand that limited electricity, 75% of Palestinian people in Gaza are food insecure. Hospitals and health services are struggling to operate and save lives, while themselves having to worry about being bombed.

Now what’s also important to note is, because of a lack of an actual military, you have these confrontations between these various resistance groups in Gaza and the Israeli military.

And so then, I would say, the Palestinian people are an occupied population. And I think when most Americans think about Israel and Palestine, they think about a conflict between two nations, each with a military, each with resources, each with the weaponry to defend themselves, and that certainly is just not the case.

And so you end up in a dynamic where these resistance groups are firing rockets that rarely affect Israeli lives; meanwhile, Palestinians face bombardments with which we’ve seen, you know, over 40 Palestinians killed in this latest round of violence, but just last summer, over 260.

And so this is something that, unfortunately, kids 14 and under in Gaza have now experienced five times in their lifetime.

JJ: And just to the point that you’ve just made, that Washington Post—well, it was a reprint of, actually, an AP piece—talked about recent air strikes as a “flare-up” that “left 49 Palestinians dead.” And it makes it sound as though violence is intervening in Gaza, or suddenly and intermittently, there is violence in Gaza.

And it sounds like what you’re saying is we need to think about violence in terms of a daily violence.

AA: Yeah, absolutely. And I would say this passive voice that media operate in is also extremely problematic. Airstrikes didn’t just occur; the Israelis launched the air strikes.

Also, we’ve been hearing many folks talk about this as a defensive war, right? But I think, if folks were to read through a lot of the nonsense, they’d find that this was a strike that Israel launched without any kind of defensive necessity, right? This was an offensive, strategic strike that they started launching in Gaza, and then it escalated.

When a cancer patient needs to access better health services in order to survive their battle with cancer, and they’re denied that ability, that is brutality.

When a fisherman has his boats off the sea in Gaza, and cannot leave past a certain radius that the Israelis grant them, that is incredibly violent.

And folks, I think, are not as understanding of that, when we think about terms like “blockade” and “occupation,” they don’t understand how a checkpoint or a blockade being in the middle of a family who needs medical care in a hospital can oftentimes lead to death and a trauma that, again, we have not had the chance to deal with as Palestinians, because it’s ongoing.

JJ: And I wonder what you make of the White House response, then, which is we’re against this, but we’re not going to do anything about it. I mean, that’s how it reads to me, is like, we want to be officially on the record as opposing both the raids on the human rights groups and the attacks on Gaza, but that’s not going to materially amount to anything in terms of policy change with regard to Israel.

AA: Yeah, that’s right. The Biden administration is really just like any other US administration in recent history. And what US politicos have uplifted as their truth is that you need to walk with Israel and allow no sunlight between the US and the state of Israel to succeed politically, domestically.

The problem is we, as Americans, have no idea why, strategically, that makes sense for us. And so Americans, I think every election, we witness the US president essentially pledging allegiance to the state of Israel, and we don’t know what we get out of the deal.

So even if we did not have the perspective of the immense human rights abuse and the colonization and the ethnic cleansing, we would at least, as Americans, be asking these questions about why is it our tax dollars are going to this state that continually occupies, and ethnically cleanses a people.

And so that’s why this media battle is particularly important. That’s why sources like this, where folks can get a different perspective, one that’s not often seen in mass media, are critically important, because there’s a voice of the Palestinian people that, even through it all, is able to shift the conversation in the US.

And that’s why you’ve seen, not only the targeting of these six NGOs in Palestine, but targeting of NGOs and Palestinian organizations here in the US.

Before I get to any of that in the US, just to mention the six organizations, these are organizations doing critical work to support women organizing, agricultural workers, organizing political prisoners, and one of the orgs, DCIP, is literally, its mission is to defend children, right?

Because if Israel’s telling us that the violent resistance groups are “terrorists,” right? That’s their terminology. That’s what they label the groups who resist. But then they’re also labeling the groups that are engaging in congressional advocacy and organizing and lobbying, they’re labeling those groups as “terrorists” too.

So what that means for us is that the lines have been blurred by the state of Israel, and they’re doing that because we’re winning; we’re shifting the conversation. Folks are seeing the atrocities that the Israelis are conducting on a day-to-day basis, and they can’t, from a PR perspective, continue to handle the way the conversation is going.

JJ: And I only want to add to that—thank you so much, Ahmad—I just want to add, also, for listeners, that this idea that criticism of the state of Israel is inherently antisemitic: You can find progressive Jewish groups, Jews for Racial & Economic Justice come to mind, but there are a number of groups who can inform you about how concern for Palestinian rights does not amount to antisemitism, and that should not be able to be used as a wedge to divide people, in the US or anywhere, that that is a false conflict that’s being set up by people who have their own interests.

AA: Absolutely. Yeah. If I could just touch on that: Look, we all recognize the monstrosity that was Nazism, and the brutal nature of the Holocaust. And what happened to the Jewish people, obviously, at that point in time is something we are all opposed to, and we absolutely reject antisemitism. This is something that various Palestinian organizations have outright issued statements around. We reject antisemitism.

However, when you colonize people’s land and continue to do so, claiming to do so in the name of Jewish people worldwide, you’re actually, again, blurring the line between Judaism and Zionism. So I think Zionism is to blame with a lot of the confusion that people have around anti-Zionism and antisemitism.

You know, as Palestinian people, not only do we have Jewish folks that are in solidarity with us now, we had Jewish folks living with us in Palestine, side by side, speaking Arabic, and across the Arab world.

And actually, I’ll note there was a really great book released a couple of years ago by a Jewish author, titled When We Were Arabs, and it tells the story of Jews in Arab lands, so Jews who viewed themselves as Arabs, who woke up every day listening to Arabic music, eating Arabic foods, speaking Arabic amongst their families, and then Zionism abruptly changed that across the region and, of course, across the world.

And so we have to reject those kinds of lines that are being drawn. Anti-Zionism is absolutely not antisemitism. And I can see a future where people acknowledge that, and that’s of course going to be a future where Palestinians are finally free.

JJ: We’ve been speaking with Ahmad Abuznaid from the US Campaign for Palestinian Rights. They’re online at uscpr.org. Ahmad Abuznaid, thank you so much for joining us this week on CounterSpin.