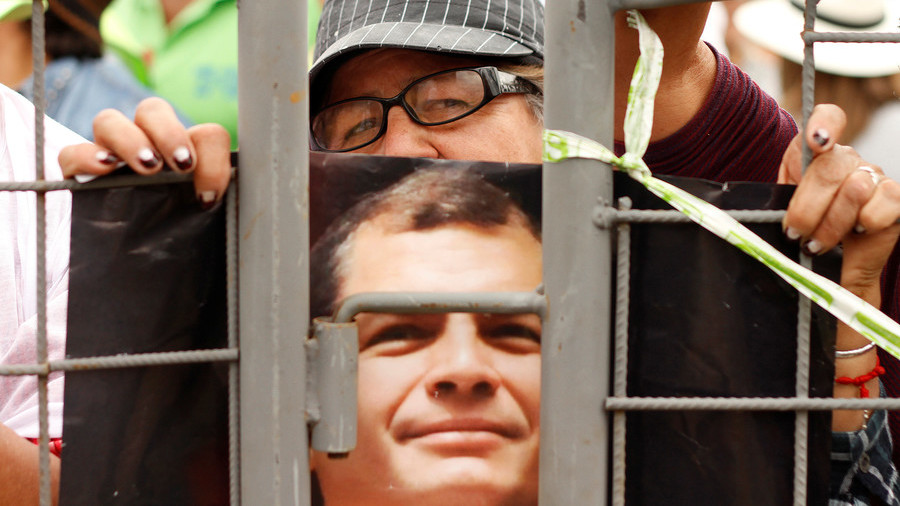 Former President of Ecuador Rafael Correa has defied an arrest order, claiming the new government is waging “lawfare” to deprive him of a political future – and even life, in an exclusive RT interview.

Judge Daniella Camacho ordered the arrest of three-term President Rafael Correa on Tuesday over his alleged involvement in the 2012 abduction of a political opponent and requested that Interpol apprehend him for extradition. Correa, who now lives in Belgium, called the allegations “tremendously ridiculous” and dismissed Ecuador’s pressure on him in an interview with RT.

“That is called lawfare, you know,” Correa said. “They can’t defeat us in elections, so they try to defeat us using the judicial system. We have to stop that because this is not democracy.”

The former president, who also hosted a show ‘Conversations with Correa’ on RT Espanol, said that his adversaries “may invent whatever they want because they control everything – media, judicial system, the National Assembly [Ecuadorean parliament], etc. to pursue left leaders.”

“This is a regional strategy to pursue progressive leaders through judicial system – it’s called lawfare or judicialization of politics,” he said. Asked what he is going to do next, he replied: “Just waiting because there is no hope to have a fair [trial].”

He maintained that the prosecutor dealing with the 2012 abduction case was appointed against Ecuadorean law, which stipulates the post may only be filled after a nationwide selection. “He was installed with a mission to put me in jail,” Correa said, adding that he hopes that political situation in Ecuador will finally change.

“Come on, I don’t have to prove I’m innocent. Under the rule of law, they have to prove that I am guilty. And they will never be able to do that because they’re lying.”

The former president described the ongoing effort by the Ecuadorean government to apprehend him as “a strategy to prevent me from returning to my country to be candidate again.” On top of that, he noted, Ecuador deprived him of any security, saying, “they also want me dead.”

Correa was replaced in power by his ally Lenin Moreno in April last year, after a tight national election. At the time, Correa welcomed Moreno’s victory as a “triumph of revolution,” but later branded him a “traitor” and “a wolf in sheep’s clothing.”Relations between the two soured after Moreno proposed a constitutional referendum to limit the number of presidential terms for one person, thus barring Correa from seeking re-election in 2021.