They’re Murdering My Son: Father Of Julian Assange Tells Of Pain And Anguish

Julian Assange’s father, John Shipton, gave an interview to Strategic Culture Foundation over the weekend. After arriving from his home country of Australia, Shipton is visiting several European states, including Russia, to bring public attention to the persecution of Julian Assange by British authorities over his role as a publisher and author.

First though an introduction to the Assange case. Few media figures can be attributed to transforming international politics and the global media landscape. Arguably, Julian Assange, author, publisher, and founder of the Wikileaks whistleblower website (2006), is in the top tier of world-changing individuals over the past decade.

The Australian-born Assange has previously been awarded accolades and respect for his truth-telling journalism which exposed massive crimes, corruption and nefarious intrigues by the US government and its Western allies.

One of the most shocking exposés by Wikileaks was the video ‘Collateral Murder’ (2010) which showed mass, indiscriminate deadly shootings by US troops in Iraq. Similar war crimes by American troops in Afghanistan were also revealed by Wikileaks. The so-called US and NATO “war on terror” was exposed as a fraud and gargantuan crime.

Assange worked with American whistleblowers Chelsea Manning and Edward Snowden, the latter revealing the illegal systematic global surveillance by US spy agencies against ordinary citizens and political leaders around the world in flagrant violation of human rights and Washington’s much-vaunted claims of upholding civil liberties and international law.

The powers-that-be have gone after these truth-tellers with a vengeance for daring to expose their hypocrisy and vile record. Snowden is in exile in Russia unable to return to the US out of fear of imprisonment for “treason”. Manning is currently being detained indefinitely in the US because she refuses to testify against Assange. Julian Assange’s ground-breaking journalism exposing government crimes did so in a way that so many established Western news media outlets failed to do out of cowardly deference to the powers-that-be. Such so-called “independent” media are now facilitating the persecution of Assange by smearing his reputation and ignoring his plight in prison. He has been smeared, among other slanders, as a “Kremlin agent” and a “cyber terrorist”.

Watch | Breaking The Media Blackout on the Imprisonment of Julian Assange

After almost seven years (2012-2019) confined in the Ecuadorian embassy in London where he sought political asylum to avoid arbitrary arrest by British authorities over trumped-up sex assault claims (since dropped), Assange was illegally arrested in April this year by UK police storming the Ecuadorian embassy. He has since been detained in maximum security Belmarsh prison where he is held under conditions of solitary confinement. He is being detained indefinitely while the US prepares a request to British authorities to extradite him. If he is extradited to the US, Assange will face charges under the Espionage Act which could result in 175 years in jail.

Belmarsh prison in London is a Special Category A jail (the most severe of four grades of detention centers in the British penal system). It has been used previously to detain mass murderers and the most dangerous convicted terrorists. Julian Assange’s ongoing incarceration there under lockdown is preposterous. It is an outrage, and yet Western media show little or no concern to report on this gross violation of due process and human rights law.

Earlier this month, on September 13, Assange was ordered by a British judge to be detained further even though he was due to be released this week on September 22, after having served out his sentence over a minor bail infringement that occurred back in 2012 when he fled to the Ecuadorian embassy in London. That bail infringement is null and void since the original sex-assault claim in Sweden has been dropped due to lack of evidence against Assange.

Evidently, his detention is being used by the British government (no doubt at the behest of Washington) in order to destroy his health and very being. At age 48, his physical and mental condition are deteriorating by the day under the extreme conditions which amount to torture, as the UN special rapporteur Nils Melzer noted after visiting the prisoner back in May this year. The UN report called for Assange’s immediate release.

The following is an interview conducted with Assange’s father, John Shipton. He is currently on a tour of European countries to highlight the gross miscarriage of justice against his son. Shipton is visiting Britain, Ireland, Austria, Germany, France, Spain, Switzerland, Norway and Sweden to campaign for Julian’s immediate release. He is also traveling to Russia. 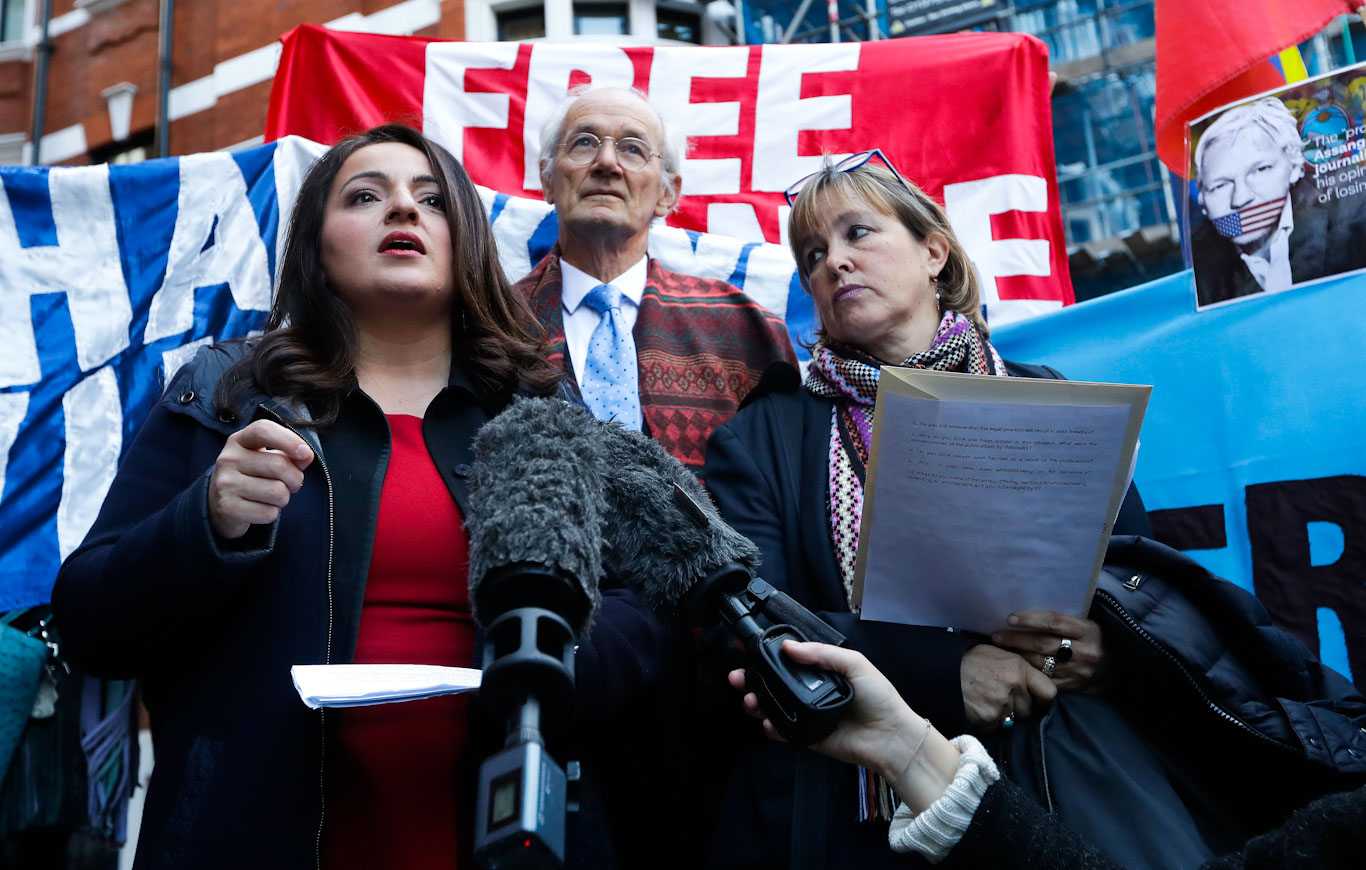 German MP Sevim Dagdelen, left, speaks to the media alongside John Shipton, biological father of Julian Assange, and German MP Heike Hansel, right, outside the Ecuadorian embassy in London, Thursday, Dec. 20, 2018. Sevim Dagdelen and Heike Hansel, Members of the German Bundestag and of its Committee on Foreign Affairs, met Wikileaks founder Julian Assange inside the Ecuadorian embassy on Thursday, in light of reports of an imminent end to his asylum in the embassy. The parliamentarians wished to discuss the heightened situation with Assange and come to a humanitarian solution. (AP Photo/Kirsty Wigglesworth)

Strategic Culture (SC) | Can you describe the current prison conditions for Julian and his state of health?

SC | It is reported that you are being restricted from contact with your son in prison despite you having traveled from Sydney, Australia, to visit him. Is that correct?

JS | Julian can receive two, two-hour social visits per month. My visit was double-booked with another thus cancelled. A week later, in company with Ai Wei Wei, we visited Julian. Sitting in the prisoners’ meeting room for 46 minutes, upon complaining we were told Julian could not be found. Couple of minutes later Julian was brought in.

SC | Is Julian being restricted from contact with his lawyers in order to prepare his defense against the pending extradition case from Britain to the US?

JS | Yes, severely. Sentenced to maximum security as a Grade B prisoner in solitary confinement, without access to computer or library. I gather the prison library has no books on criminal law.

SC | The latest development this month on September 13 saw a British judge rule that Julian’s detention in London’s max security Belmarsh prison is to be extended indefinitely despite him being due to be released on September 22 after serving his time for a bail infringement back in 2012. What, in your view, is objectionable about the latest ruling by the British judge?

JS | The judge, Vanessa Baraitser, made her own application for Julian’s bail which, with bottomless ignominy, she promptly refused. Baraitser in summing her judgement used the phrase, “likely to abscond”. Julian has partaken of legal conventions of asylum, and to which the United Kingdom is a signatory, reviewed and supported by 32 states in the American Organization of States, and he has ceaselessly offered Swedish prosecutors opportunity to interview him on allegations or travel to Sweden if guarantees of no onward extradition to the United States. Stephania Maurizi’s Freedom of Information requests of United Kingdom’s Crown Prosecuting Service and Swedish Crown Prosecuting Authority had revealed irregular anti-procedural state cooperation keeping Julian in Ecuador’s London embassy. Mini Adolf Eichmanns all of them are.

Swedish prosecuting authority has had four prosecutors, two interviews, one in Sweden 2010 and 2017 in Ecuador’s London embassy, during nine years under regulations stating that cases must be progressed. To land a man on the moon took eight years!

This is prosecutorial and judicial insouciant malice towards Julian.

SC | What are your concerns about what could happen if your son is extradited to the US where he is facing charges of violating the Espionage Act?

JS | They will murder Julian one way or the other.

SC | What do you say to politicians and media figures, like Meghan McCain, the daughter of the late US senator John McCain, who denounce Julian as a “cyber terrorist”?

JS | US Democratic presidential candidate Joe Biden, moron and crook or if you prefer, crook and moron, if memory serves, first uttered this phrase purportedly bringing Julian under the Patriot Act as a terrorist, thereby able to be extra-judicially murdered. Floundering morons repeat meaningless phrases echoing other bubble-head nonsense. Everyone of those morons are horrified by and terrified by truth and facts which everyone all can see and read on Wikileaks.

SC | Are you proud of your son’s work as a publisher and whistleblower? What do see as his main achievement from his publishing work?

JS | The achievements are many. In diplomatic cables we can read of how the geopolitical world is composed and disposed of people therein. We can understand what Uncle Sam wants and how the US state gets what its wants. Many millions of people, communities and states benefit from Wikileaks, some greatly. Example, Chagos Islanders at the International Court of Justice. Iraq War and Afghan files exposing war crimes. Vault 7 exposing CIA cyber illegalities and crimes. The ‘Collateral Murder’ video’s revelation of US war crimes in Iraq. The list of revelations and beneficiaries is long and deep. Julian Assange and WikiLeaks are a necessity.

SC | Is Julian’s treatment by British and US authorities a grave warning to all citizens about the danger to their right to freedom of expression and independent media?

JS | Yes, a grim warning. Shut up or be crushed. What free press? English-speaking mass media is homogenous in its deceptions, prevarication and banal lies. Popular internet search engines deflect inquiry to corporate cronies. Facebook corporation is greed incarnate. All these entities can be simply regulated. Nations states have powers, however, do nothing but salivate over access to data we generate… our data.

For Julian Assange and Chelsea Manning are icons of oppressive state violence towards revelation of astonishing corruption and staggering criminality.

Many gifted, brave writers, commentators and film-makers continue a furious fight in alternate media and blogs. We give our gratitude and salute such men and women, for they all know, intimately, there is no monster colder than the US state and its allies.

SC | Australian Prime Minister Scott Morrison and the government in Canberra have refused to make appeals for Julian’s release despite him being an Australian citizen. How do you view the Australian government’s lack of response to the case? Why are they apparently derelict? For example, Premier Morrison is visiting US President Donald Trump this week but he is reportedly scheduled to not raise the Assange case or to request his release. Why is Morrison acting with such indifference, and deference to the US?

SC | Are you hopeful that Julian will be released in the near future? How important have public supporters like journalist John Pilger, Pink Floyd singer-songwriter Roger Waters and actress Pamela Anderson, as well as ordinary members of the public, been to Julian’s spirits?

JS | To Julian’s spirits, friends and supporters are alpha to omega of life.