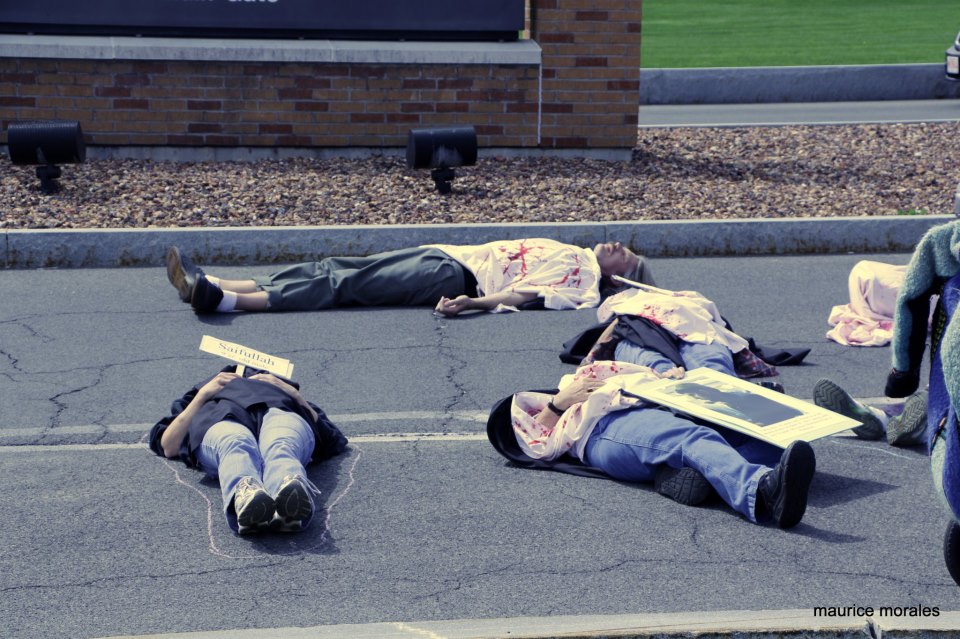 I was honored to be involved in the weekend drone conference and protest in Syracuse, New York organized by the Upstate Coalition to Ground the Drones and End the Wars.  I’ve just returned home after spending Sunday night in jail (with maybe one hour of sleep) and the long eight-hour drive back to Maine.  So my mind is slipping a few gears, my wrists still hurt after about 11 hours of wearing handcuffs, but my heart and soul feel strong from the experience.

The drone conference began on Friday evening at a local community center in the Syracuse black community.  More than 200 folks showed up for the event that featured some of the great activists from around the county like Col. Ann Wright, Kathy Kelly, David Swanson, Dr. Margaret Flowers, Kevin Zeese, Charley King, Mark Johnson, Elliott Adams, Howie Hawkins, Nick Mottern, Joe Lombardo, the Grady sisters, Tighe Barry, Debra Sweet and a large delegation of Veterans for Peace members from many states.

I spoke Saturday morning on a plenary panel along with Kathy Kelly and David Swanson. This gave me the chance to put drones into the larger context of US strategy and space technology development that is being used to advance the “interests” of corporate globalization and their effort to control resources around the planet.  I suggested that we might think of military space satellites as being the “triggers” that makes it possible for drones to fire their deadly “Hellfire” missiles that frequently kill innocent civilians in places like Afghanistan, Pakistan, and Yemen.

In addition I did a workshop entitled “Full Spectrum Dominance” that allowed me the time to thoroughly cover the nuclearization and weaponization of space issues.

On Sunday morning we gathered for a meeting on the planned civil resistance action later that day at Hancock Air Field from where the “Reaper” drone is flown over Afghanistan by military personnel sitting in front of computer terminals at the base – all hooked up by military satellites and Space Command down-link stations spread around the world.

The rally near the Air Field began around 1:00 pm and featured several speakers.  I was invited to say a few words.  I said that it was understandable that Americans are upset when innocents, including children, were killed and injured in the recent Boston bombing.  “Isn’t it equally wrong for us to do the same thing in Afghanistan and Pakistan?” I asked.  Our nation is so full of hypocrisy when it comes to the word terrorism.  When others do it we get all riled up but when we do it somehow our soldiers become heroes.  It’s been this way in the US since we began killing the Indians.

After we had moved to the base in a slow funeral procession four of us from Veterans For Peace (VFP) stood next to the yellow crime scene tape the military and the local police used to mark the point we were not allowed to pass without risk of arrest.  A large number of activists crossed this line and performed a die-in blocking the entrance to the base.  They covered themselves in white sheets covered in red.  While a policeman was issuing a warning with a bullhorn the four of us from VFP began reading the names of children killed by US drone strikes in Pakistan.  Once we finished reading the names we stepped over the line and were quickly grabbed by the cops, handcuffed, and escorted to the waiting big black police bus.

Once everyone had been arrested and the remaining rally participants had walked back to their cars the county police drove the bus to one of their offices where one-by-one they got all of our personal information.  This took some time and when they had finished and were set to take us to appear before a judge in another place, the bus would not start.  So we sat waiting for the military to send one of their buses that we eventually boarded and were then taken to the small courthouse in the suburban town of Dewitt where the base is located.  This nightmare was to last until midnight for us as we sat on the bus, still in handcuffs, while the “wheels of justice” took their ever-loving time to grind on.

We’d had no food or water since noontime and the police where not interested in giving us any.  After hours of sitting in the courthouse parking lot some of us began to negotiate with the police to give us water and bathroom visits.  It took awhile but we finally prevailed and each got about 1/2 of cup of water in the smallest Styrofoam cup possible and a chance to go to the toilet with our handcuffs still binding us.

It was taking nearly 30 minutes to process each of us by the judge who had been called in to deal with our arraignments.  Once I finally got inside my wrists had begun to swell from the tight cuffs.  The judge showed no mercy and set bail for me at $1,500 with others (for various reasons) reaching as high as $3,000 each.  This was outrageous and I told the judge I thought the bail was punitive and excessive.  He said something like, “Well you all are costing the citizens of Dewitt alot of money and we want to make sure you come back for next court appearances.”  (Often when I’ve been arrested at these kind of events I’ve been released on my own recognizance or only had to pay $50-$100.)

We finally got to the county jail (in another location) about 1:00 am and inside our holding cell (men in one and women in another) some time later.  Needless to say none of us slept more than one hour that night on the narrow cold cement benches that ran the length of both sides of the cell.  Only after having to ask were we given toilet paper.

At 4:30 am the police entered our holding cell and asked if we were ready to make our one allowed phone call.  We looked at each other with an astonished laugh and said no.  At 6:30 am I was able to call home and talk with Mary Beth who began the process of making my bail arrangements with great help from the folks from the Syracuse Peace Council who did support work for those in jail. (Others got to the phone at various times during the day – the last getting to make his call around 4:00 pm on Sunday.)  Every step with the jailers was like pulling teeth.

Finally I was released at 5:00 pm on Monday and quickly got myself loaded into my rental car and made way for Maine.  I was very tired and was not sure how far I could drive before needing to stop.  I grabbed a cup of tea and some gas and said good-bye (for now) to Syracuse.  I drove four hours and made it to Wayland, Massachusetts where a friend of ours took me in for the night.

Once home today I began to get a look at some of the news coverage of the protest and the many photos being posted onFacebook.  I had a call from the Iranian News Agency in Washington DC who wanted an interview and two of our local newspapershave taken notice as well.

One question from the media was why the harsh bail?  I answered that in a way it is the “supreme compliment”.  These drone protests at Hancock Air Field have been escalating during the past two years as more people learn about the Syracuse connection to the killing of innocent people overseas.  The local military and police authorities want to crack down to “deter” future protests.  They figure that people will think twice before coming to Hancock.  But in fact that strategy will backfire in their face.  The primary reason I went to Hancock was because of the “Orders of Protection” that have been given to everyone arrested there during the last two actions.

This ridiculous “Order” says that we must “stay away from Hancock… and refrain from assault, stalking, harassment, aggravated harassment, menacing, reckless endangerment, strangulation, criminal obstruction of breathing or circulation, disorderly conduct, criminal mischief, sexual abuse, sexual misconduct, forcible touching, intimidation, threats or any criminal offense or interference with the victim or victims of, or designated witnesses to, the alleged offense and such members of the family or household of such victim(s) or witness(es) as shall be specifically named Greg Semmel.”  The judge handed me the “Order” to sign.  I said that I had no idea who Greg A. Semmel was…. as it turns out he is commander of Hancock Field.  I said I’d not know the man if I stumbled into him on the street.  The judge then said, good you don’t have anything to worry about then.

But this “Order” is something to worry about because it makes it possible for the State of New York to arrest me and incarcerate me for up to seven years for contempt of court if I return to protest at the base.  They are cracking down hard on the protests because they are working.  The public is beginning to learn about these killing drones and minds are changing.  The protests must be stopped.

Just as we are learning here in Maine, as our state Attorney General (a Democrat) tries to kill a bill that would require police to have a warrant before doing domestic drone surveillance, extraordinary steps are being taken by the government to “protect drones” from activists.

Obama has announced that 30,000 drones will be buzzing around the US in coming years snooping on all of us.  Our Attorney General in Maine calls drones “an economic driver” and our new Sen. Angus King from Maine called them “humane weapons” while being interviewed recently from Washington on TV.  As the fiscal fabric of America unravels drones are the latest economic stimulus package from the federal government and states are now lining up with their empty hands held out in subservient anticipation.  Drone protests are obstacles to be dealt with.

So rather than protecting the constitution, the lives of innocent people in war zones, and getting serious about real problems like growing poverty and climate change our political class is working overtime to guard the drone industry and threaten activists with serious jail time if we keep opposing them.

These twisted drone plans will indeed backfire.  Upon returning home I noticed emails flying around raising funds to help people pay for their bail at Hancock.  The protests will continue there, as they should.  More people will join this Gandhian wave.

People clearly understand that we must protect the peace, the innocents, social progress here at home and defend our basic right to protest injustice and wars. We have no other choice.

Banner Drop by Veterans for Peace