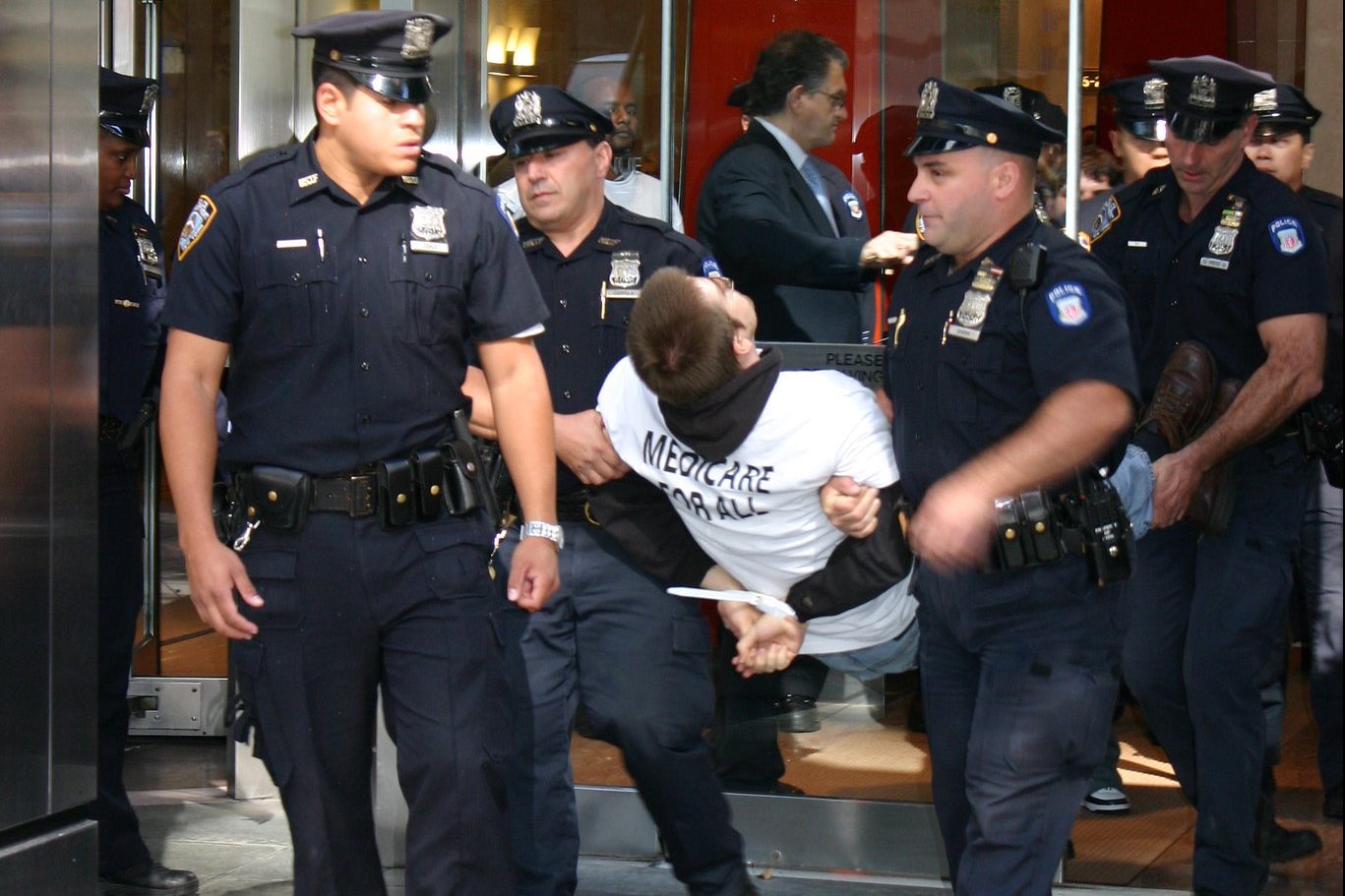 This Is How We Fight For Our Human Rights

Above photo: Person arrested protesting for Medicare for All. New York City. 2009. HealthcareNow.org.

Popular Resistance relies on readers like you. If you value the work Popular Resistance does to keep you informed and inspired during these difficult days, please consider making an end of year tax-deductible donation. All donations of $50 or more will receive a premium from the Popular Resistance store. After making your donation, write to info@popularresistance.org to let us know which item you choose. CLICK HERE TO DONATE. Thank you!

It was ten years ago last week that the Arab Spring began. I recall it well as the day before Mohamed Bouazizi set himself on fire in Tunisia and ignited a revolutionary movement, I stood in the snow for hours protesting outside the White House with hundreds of veterans against the wars in Iraq and Afghanistan. Inside the White House, President Obama was telling the press how well the wars were going. Outside, soldiers who fought in those wars told a different story.

Tired of symbolic actions, many involved in that protest held a series of meetings afterwards that resulted in organizing the occupy encampment on Freedom Plaza in October 2011. It was a time when occupations of public space were happening around the world, inspired by the uprising in Tunisia, and in state capitols, such as Madison Wisconsin in the United States. People were waking up to the fact that the problems are systemic and not their fault, as they were told. They recognized that the traditional tools of activism were not enough to confront the power holders. We needed to be more resolute, more militant and to strike at the roots, the systems that create the crises we face.

The protests in late 2010 and 2011 occurred because people saw, as Vijay Prashad writes, “the futility of voting for evils and lesser evils; these people were now seeking something beyond the horizon of the election games which seemed to bring so little change. Politicians ran for elections saying one thing, and then did the exact opposite when they took charge.” It was time for people to assert their power and create systems that were participatory and democratic. As I wrote last week, if we want to solve the current crises, it will take a revolution.

The situation now is as bad as or worse than it was during the Occupy Movement. Tens of millions of people have lost their jobs, and millions have lost their health insurance too. Tens of millions more people may lose their homes. Businesses are closing and Congress refuses to take adequate action to ameliorate this. The bill finally agreed upon by Congressional leaders Sunday night is far from what is needed.

The Democrats caved in to Republican demands, as Matt Taibbi describes, so the bill leaves out new funding for local and state governments and gives employers legal immunity for failing to protect their workers from COVID-19. It only extends the eviction moratorium one more month.

Perhaps members of Congress were more concerned about spending the holidays with their families than they were about the lives of the people they are elected to represent. Imagine in a hypothetical world where Democrats fought for the things they pretend to support what would have happened if they had held out. They may have missed Christmas, but the Republicans would have come under increasing pressure to budge and the bill might have been better.

As Jack Rasmus writes, these crumbs offered by Congress will only kick the can of economic collapse a little farther down the road. According to the Kairos Center, before the recession and pandemic occurred, 140 million, or 43.5%, of people in the United States were living in poverty. Since then, an estimated 25 million people have lost their jobs.

The problems we face are systemic in nature and they require systemic changes. The bill now going through Congress is a tiny bandaid on a gaping wound. People are demanding more – a universal basic income to end poverty, national improved Medicare for all, affordable housing, free education and an end to student debt, and a Green New Deal that builds clean energy infrastructure and provides millions of high quality jobs. To pay for these programs, we need to cut military spending, create public banks as China has and tax the wealthy.

A new study confirms what we all know, trickle down economics in the form of tax cuts for the rich just make them richer and don’t help the economy. We have to build from the bottom up by getting money, debt relief and free services to the people. We have the money. It is time to be bold in our demands and to reimagine what we want our world to look like.

To win the changes we need will take a shift in our thinking. We have to know what we are fighting for and have a strategy to win. Ajamu Baraka of the Black Alliance for Peace provides the necessary framework in the concept of People(s)-Centered Human Rights (see the webinar embedded in the linked article for more information). Baraka was the founding director of the US Human Rights Network, which was the first body to apply a human rights framework to policies and practices in the United States.

People(s)-Centered Human Rights (PCHR) comes from the Black Liberation Movement. It recognizes that human rights should be determined by the people and that to win will require struggle. PCHR require systemic changes. These rights cannot exist where there are oppressive systems such as capitalism, neoliberalism, white supremacy, patriarchy and imperialism. And they are internationalist in nature; they connect us with peoples throughout the world because these rights supersede the state. Baraka defines PCHR as:

“Those non-oppressive rights that reflect the highest commitment to human dignity and social justice that individuals and collectives define and secure for themselves through social struggle.”

PCHR are different from the liberal notion of human rights that are determined by the state and that have been weaponized as a justification for ‘humanitarian war.’ It is not up to an outside body, such as the US government, to decide what rights a population needs and to impose them. PCHR are based on what people decide for themselves are their needs. Self-determination is a fundamental principle. And PCHR are won through organizing and mobilizing to build what is needed or to force the state to give in to the people’s demands.

The struggle of drivers in New York City to create their own cooperative so they control their work environment and earn living wages is a struggle for PCHR. They are liberating themselves from the exploitative model imposed on drivers by corporations like Uber and Lyft.

Pelosi has said throughout her 30-year career that she supports single payer health care but “now is not the time for it.” If a raging pandemic that has killed 325,000 people so far and a prolonged recession where 14 million people have lost their health insurance is not the time, then there will never be a time. The campaign is asking Medicare for all supporters in the House to withhold their vote for Pelosi as Speaker if she refuses to allow the floor vote on Medicare for all.

This is an example of a PCHR demand because the Medicare for all bill came from the people and it takes healthcare decision-making away from the corporations. In the current legislation, people have input into how the healthcare system is structured, although it could go farther and create community-control of the healthcare system as defined in the platform of former Green Party candidate Howie Hawkins.

The original bill, HR676, was based on the Physicians Working Group recommendations and was championed by social movements as the model bill. The newest bill is HR1384, sponsored by Rep. Pramila Jayapal, which used much of HR676. Senator Sanders refused to introduce a companion bill to HR676 or HR1384 and instead wrote a weak version, sacrificing policy for the temporary support of Senators like Cory Booker and Kamala Harris.

It was popular demand that drove Congress members to sign onto the bill, but although they campaigned and won based on their endorsement, they have done little to nothing to advance it. So, this campaign is requiring them to show their true position. Will they side with the popular demand (72% of people across the political spectrum want Medicare for all)? Or, will they side with their corporate donors?

The response from members of Congress has either been silence or, in the case of Alexandria Ocasio Cortez, to tell people this is not the time and to fight for something less that they can win. She sounds more like Nancy Pelosi than the change agent she claims to be. Power holders always tell the movement to ask for less, but we cannot compromise on something as basic as health care in a pandemic, which means life or death for people.

The hashtag for this campaign is #ForceTheVote. People are calling and writing to their members of Congress to push them to withhold their support for Pelosi unless there is a vote. As Briahna Joy Gray wrote, “A floor vote on Jayapal’s bill could capitalize on the public’s overwhelming approval for Medicare for All, and expose the chasm between the policies Democratic voters want and the positions their elected representatives are willing to take. It’s difficult to imagine a better historical context for this fight.”

Democrats will never fight for what the people need unless they are forced to and are held accountable for their actions. As we go into a new Congress and administration, where progressives believe they can push the Democrats to the left, no time can be wasted. If the Democrats can’t act now, when they have an opportunity to flex their power, then they won’t act in the people’s interests in the future. They will be further exposed as the oligarchic party they are and more people will understand why the expression exists that “the Democratic Party is the graveyard of social movements.”

Our struggle must be independent of the capitalist political parties and rooted in what all liberation movements seek, shifting power to the people to build, as Ajamu Baraka says, “social relations and institutions that reflect a real commitment to human dignity and social justice.”