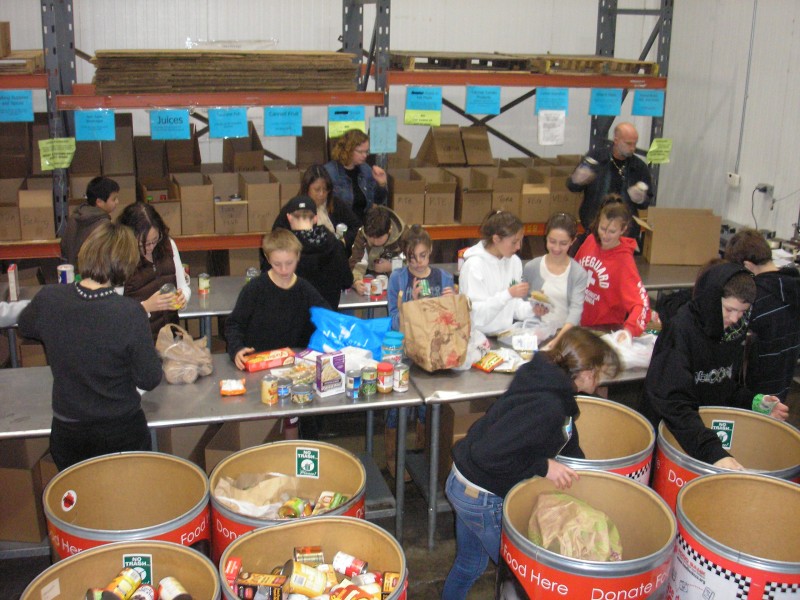 ‘This Is Not What A Food Bank Was Designed To Do’

California food banks are struggling with an overwhelming need and ongoing recession.

On a recent Thursday morning, a drive-through food bank popped up on the campus of Christian Brothers High School in Sacramento, California. Participants picked up bags of rice, canned chicken and fresh broccoli, all while following social distancing guidelines. In just two hours, enough grocery boxes to feed approximately 4,000 people slid from the gloved hands of staff and volunteers into backseats or car trunks. People drove home with produce from local farms, fresh meat, and nonperishables from across the state.

Serving 8,000 people weekly at two locations, the Sacramento Food Bank & Family Services drive-through operation is just one example of Northern California’s response to high food insecurity, which has been exacerbated by the coronavirus pandemic. “You have so many people that have been displaced from work, you have so many single moms with children at home, and you have so many isolated seniors, that the demand for services has just gone through the roof,” Blake Young, the organization’s president and CEO for 15 years, said. Before the coronavirus pandemic, the organization served approximately 150,000 people each month. In April and May, that number went up to more than 300,000 people.

But the worst may be yet to come, thanks to the ongoing recession. Regional food banks, which are designed to be safety nets, not main sources of food, fear that they won’t be able to meet the swelling need.

“It’s hard to predict how long this is going to last, but we are looking at beyond this year and into next year in terms of the demand,” Young said. “We’re really focused on sustainability because no food bank can sustain — ” he paused. “This is not what a food bank was designed to do.”

According to the COVID Impact Survey, conducted by researchers at NORC at the University of Chicago, California’s food insecurity level more than doubled between March and April, from approximately 11% of the state’s population to approximately a quarter, or about 10 million people.

“This is an unbelievably large increase in food insecurity.”

“This is an unbelievably large increase in food insecurity,” Hilary Hoynes, a public policy and economics expert at the University of California, Berkeley, said. The study measured food insecurity by asking survey participants how often they ran out of food during the week and couldn’t afford to purchase more.

By comparison, during the Great Recession of 2008, food insecurity increased nationally by just three and a half percentage points. Hoynes predicts that some Californians will struggle to afford food for the first time, as people who have been laid off or furloughed burn through their stimulus checks and stopgaps come to an end. California’s rent payment holds ended in May, for example, and the federal $600 unemployment payment boost is scheduled to end in July.

In neighboring Yolo County, the food bank has been delivering food since March to elderly and medically vulnerable residents who are sheltering in place. According to Joy Cohan, director of philanthropic engagement at Yolo Food Bank, 750 households received boxes in the program’s first week. By mid-May, the food bank was delivering boxes to 3,000 households per week. In total, the food bank now feeds approximately 45,000 people, about 60% higher than before the coronavirus pandemic, Cohan said.

The food bank also packs boxes for Project Roomkey, a statewide initiative created to provide homeless people with temporary shelter in hotel rooms. Each week, approximately 300 participants in Yolo County receive items that can be prepared without a kitchen, such as instant noodles. Some boxes contain toys and special treats for homeless children.Max Whittaker/High Country News

There’s an intensifying scramble to get enough food. Yolo Food Bank spent about $200,000 per month on food and operations before the pandemic. By the end of April, that had jumped to approximately $350,000 per month. According to Cohan, the food bank now is spending more per month than it is raising. Partnerships have helped: For example, in order to transport all of the boxes requested at just one low-income senior housing complex in West Sacramento (part of Yolo County), the food bank wrangled the help of a local church, which owns a truck large enough to deliver some 50 boxes at a time.

Crucially, the church also had a Russian-speaking member, Alexey Budyak, who recently helped translate for church volunteers and food recipients, many of whom are elderly Ukrainians who don’t speak English, some of whom are his relatives. As people milled around him, Budyak helped new participants register and helped the church determine which boxes to place on which doorsteps. One new participant, Daria Shlykova, a thin, soft-spoken woman in a T-shirt and leggings, watched as her mother assisted an elderly woman with registration. Shlykova’s father, who has a severe disability, has lost muscle control and can’t move without help. Someone else needs to be present when he eats or drinks to make sure he doesn’t choke. Shlykova and her mother both care for her father, but for the past few weeks, Shlykova has been afraid to grocery shop in case she brings home the novel coronavirus, instead ordering grocery deliveries from a different church group. Now, she eyed the packages being sorted. “I don’t even know what’s in there,” she said with a small laugh, “but my mom decided that we need it.”

Although the pandemic is making things worse, it’s not the root cause of regional poverty. According to Hoynes, California had a “quite high level of poverty” even before the novel coronavirus arrived, largely because of California’s skyrocketing housing costs. “Even in a state that has been proactive about raising the minimum wage and so on, the cost of housing just outpaced wage growth for a huge amount of the population,” Hoynes said. Exacerbating California’s growing hunger is the fact that many people don’t qualify for federal support because they are undocumented.

“I have a lot of worries,” Hoynes told me. “We’re not doing enough now. A lot of Americans are really suffering.”

Meanwhile, food-access organizations are unsure how long they will need to maintain pandemic levels of support — or even how long they can, as private donations dry up and demand increases. When the pandemic is over and it’s safe to go to grocery stores, Cohan predicts that Californians still will face food insecurity.

“Even when the health crisis part is over, we’re going to have a lingering economic catastrophe, really, on our hands,” Cohan said.

Maya L. Kapoor is an associate editor at High Country News. Email her at mayak@hcn.org or submit a letter to the editor.