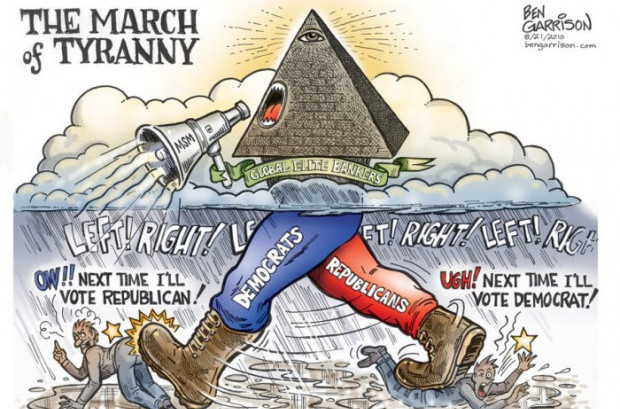 Note: A sit-in on the Capitol Hill steps seemed to happen organically when “civil rights icon” Rep. John Lewis and Wall Street’s own Sen. Corey Booker sat on the steps and did a livestream about the terrible senate healthcare proposal put forward by the Republican leadership. Then, others started to join them — how exciting! — then more. Even Democratic leader Sen. Chuck Schumer joined the “sit-in”. Wow — something was really happening. MoveOn’s leader was there to promote it — as it happened — what a coincidence, he just happened to be walking by! Then, Occupy Democrats, another Democratic Party propaganda site, promoted it on social media. Some unknown journal, the Washington Journal, did an article about the whole thing “reporting” that the event was “something remarkable” and how it gave them faith in democracy. When you look at the about us page of the Washington Journal there is nothing to identify who they are, no biographies of reporters, nothing about their funding but they do say “In an age of fake news, we are a trusted source with a track-record of honesty and integrity.” Well that is reassuring.

Usually Democratic Party propaganda is more sophisticated than this but even smart people fell for this propaganda ploy.  Other examples: New front groups like Indivisible are created after the election with resources on how to stop Trump’s agenda and incredible nationwide organizing capability from out of nowhere, or the myth that a massive Women’s March is planned because of a Facebook post by one woman resulting in hundreds of thousands coming to DC.

We know many people who are working with local Indivisible groups; some are becoming active for the first time. Many are getting a lot out of the protests. We are pleased to see people violating Indivisible’s guidance to only go negative on Trump and not put forward positive solutions, such as advocating for improved Medicare for all. Many Indivisible “Protect the ACA” events have turned into improved Medicare for all rallies.

We also know that many people really enjoyed participating in the Women’s March after Trump’s inauguration; that it was a very positive experience for them. So, we are not saying do not participate but we do think it is important to realize that a march of hundreds of thousands of people was not because of one Facebook message generating a massive response. This event was organized by a massive organization and it was not a coincidence that many Democratic Party elected officials were on stage. This was an anti-Trump, pro-Democratic Party event.

People should know the truth that giant rallies are not spontaneous. They take a lot of time to plan and organize. We need to point out when Democrats create fake resistance events — where Hillary Clinton can even say she is a member of the resistance. We need to make fun of it and laugh at it knowing it is all designed to mislead us, focus our attention on Trump and not focus on the deeper system-wide political problems including the neo-liberal, Wall Street and war Democrats who are at the center of the many problems the country faces — including healthcare. And, we need to realize our job is to build a mass, transformative movement that is independent of both Wall Street funded parties. Transformative change needs to challenge the system; and that means also challenging the Democrats.

It began with two Democratic legislators, both deeply concerned about the threat from the Republicans’ Trumpcare bill, sitting on the steps of the Capitol — Senator Cory Booker (D-NJ) and Representative John Lewis (D-GA), the Civil Rights legend himself. What began as a conversation shared on Facebook grew organically into a powerful moment of truth.

Ben Winkler of MoveOn.org happened to be walking by in the early moments and chronicled the evening as the crowd and emotion swelled.

I’ll let Ben’s words speak for themselves, but this should serve as a reminder that despite everything there are genuinely good people working passionately to make Americans’ lives better, and magic can happen when a concerned citizenry gets involved.

After your read and share this thread, call your Senators at 202.224.3121 and let them know exactly how you feel about the effort to repeal Obamacare.

1. Tonight, something kinda magical happened on the steps of the Capitol. It started like this: pic.twitter.com/9HDvz4K4W6

3. Booker and Lewis started a Facebook Live to talk about Trumpcare and what this moment means for America.

4. I didn’t know that it was happening when I walked up to the Capitol. I work with @MoveOn and was there for something else. Snapped this. pic.twitter.com/b1gV49tzDF — Ben Wikler (@benwikler) June 27, 2017

5. When I took that picture, I was going to tweet: “something vile is brewing in that building. #Trumpcare.” But I got a text—

6. The person I was trying to meet up with told me he was on the East Capitol steps on the Senate side. I found him, and saw this: pic.twitter.com/WkXG5vIWas — Ben Wikler (@benwikler) June 27, 2017

8. Maybe 20 people were sitting around them. They were telling stories about health care, laughing, answering questions. Felt like a picnic. — Ben Wikler (@benwikler) June 27, 2017

9. I sat down. Realized I was sitting on the jacket of @SenBobCasey, who I realized was sitting next to me. Oops! Hi! Wow! Is this real?

11. This, I thought, must be what democracy is like in very tiny countries, or Ancient Greece. Senators & citizens kibbitzing about issues.

12 The funniest thing to me was seeing people you normally see on TV passing @CoryBooker‘s phone back and forth to shoot video. @SenSchumer! pic.twitter.com/JQyn1s4otL — Ben Wikler (@benwikler) June 27, 2017

13. And then @CoryBooker asked me to speak. And he said, stand up so the crowd can hear you!

And I realized it had grown.

14. Suddenly everyone was on their feet—and roaring. Hundreds of people. There spontaneously. Ready to fight for health care. — Ben Wikler (@benwikler) June 27, 2017

15. It was hard to get a shot of thr while crowd, but here’s a piece of it. That’s @ChrisMurphyCT holding the phone, videoing @CoryBooker. pic.twitter.com/gLzds3mIQf

17. A bunch of groups have been planning a People’s Filibuster—three days of Capitol protests to stop Trumpcare, starting 2pm tomorrow.

19. People told their stories. A refugee diagnosed with cancer weeks before her graduation, alive now thanks to Medicaid.

20. A child of immigrants, born with a rare disease, now healthy and an organizer fighting for justice for all—preexisting conditions or no. — Ben Wikler (@benwikler) June 27, 2017

21. People asked how they could fight. We shared ways to do it. Come protest at the Capitol this week. Protest at local offices. Make calls.

22. @CoryBooker‘s phone was running out of juice. I had a battery! Very proud that that’s my iPhone cable in the photo. Keep it going! pic.twitter.com/NCs4tCDHiS — Ben Wikler (@benwikler) June 27, 2017

23. Where did these people come from? Honest question. If you were there, how did you find out about it? pic.twitter.com/nQreEbOHUY

24. Here’s why this matters. The whole question in this health care fight is whether the public—which HATES the bill—is going to show up. — Ben Wikler (@benwikler) June 27, 2017

25. There are 52 Republican Senators. This is their top priority. By rights, it should be done already. Smart insiders still say they’ll win