This Is Why No Good Deed Goes Unpunished

No good deed goes unpunished, as the saying goes.

While that phrase is often uttered with more than a thin layer of sarcasm, it seems to be one that the establishment takes very seriously.

This January, nine members of the humanitarian group No More Deaths went to court for aiding immigrants who had crossed one of the most unforgiving and treacherous parts of the U.S./Mexico border. They were charged with abandoning private property – i.e. water jugs – and the unauthorized use of a motor vehicle in a national wildlife refuge. The most recently charged, Scott Warren, committed the crimes of “giving food and water” and even – wait for it – even providing migrants with “beds and clean clothes.” In court, this translated to a charge of bringing in and harboring undocumented immigrants. And while members note that since Trump’s election, there has been a sharp rise in the harassment and surveillance of organizations working with immigrant rights, a report released just before Warren’s arrest outlines a long-term fight against do-gooders. 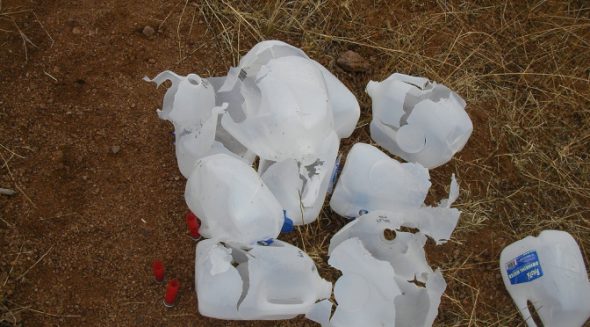 In mid-January, No More Deaths along with La Coalicion de Derechos Humanos released a report titledInterference with Humanitarian Aid. Between 2012 and 2015, No More Deaths counted at least 3,586 gallon jugs of water that had been destroyed by stabbing, stomping, kicking, draining and/or confiscation. Far from being merely litter, of the at least 31,558 gallon jugs that were distributed on migration trails in that same time period, more than 86% were used. Based on data, No More Deaths reports that water jugs were destroyed more than twice a week on average. In other words, border patrol are condemning people to death and punishing those who stand in the way of this homicide. As noted by two men from Guatemala who shared their migration story with humanitarian aid workers, “It’s not that people are dying; they are killing us. We are being killed.” 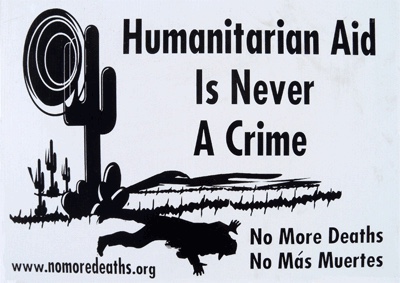 Also in the file of punished good deeds: feeding the homeless. This too has been an ongoing attempt at government sanctioned slow homicide. Between 2013 and 2015 alone, 26 cities passed food-sharing bans, according to the National Coalition for the Homeless. More recently in January, 12 volunteers were charged with misdemeanors in El Cajon, California while feeding the homeless. Proponents of the food-sharing ban claim that it’s due to a rise in Hepatitis A cases and admittedly Hep A is certainly no joke. The contagious liver infection is linked to a lack of safe water, poor sanitation and hygiene and has broken out in major cities such as Los Angeles, San Diego and Santa Cruz in the past year. With that in mind, one might ask why local governments don’t invest in clean water, shelter and food for the homeless. In fact, I know where you might be able to score some jugs of water. If your concerns are sanitation and hygiene, make sure people are getting medical care, aren’t sharing needles, and aren’t being dumped in ghettos in their hospital gowns. People will do almost anything in order to survive. Living in filth while hungry is not the preferred option. A warm meal in a park is far more preferable – indeed, it’s something a lot of housed families enjoy as well. I wonder why a young couple on a picnic never gets ticketed for public feeding. And with regards to the dangerous spread of Hep A, as someone who was once homeless in LA, I can tell you that I don’t know of anyone who ever got Hep A (or any other illness for that matter) from a food-sharing event. In fact, compared to the food available at many overflowing and understaffed shelters, food in a park is often more healthy and sanitary. But still, the fight to punish the poor, desperate, and homeless continues.

Also this past January, 7 members of the Tampa chapter of Food not Bombs were arrested for serving food to the homeless in a local park. The group claims that while police have rarely arrested people in the past, there are often tense exchanges between volunteers and cops. What made this time different, members say, was a big college football event in town. The police were sent in to make the city “presentable” by arresting those feeding the homeless. 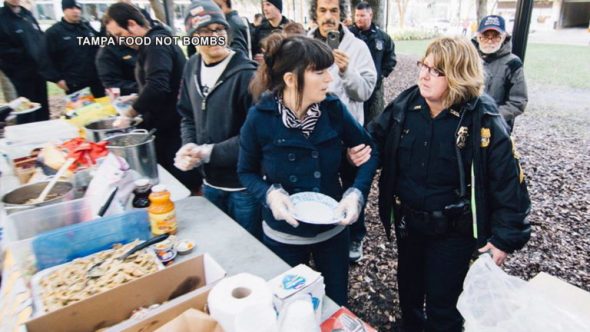 The practice of covering up the homeless for the sake of large events is also nothing new. When the Olympics came to Rio in 2016, homeless and poor folks were evicted and forcibly moved in order to make room for new construction and hide the city’s gross problems of poverty from Olympic game patrons. Many fear that the same fate awaits the Los Angeles homeless population as the city last year won the bid to host the 2028 games.

With the push to shove homeless people out of sight, one might think that citizens willing to house the houseless would be appreciated. Well, leave your logic at the door. Earlier this year, a man in Chicago found himself threatened with homelessness after – sheltering the homeless. During the most brutal of the winter months, Greg Schiller had set up cots and sleeping bags in his basement and garage. Particularly on nights when a local shelter wasn’t open, desperate people gladly took cots in Schiller’s home rather than, you know, freeze to death. But when the police caught wind of Schiller’s do-gooding, they threw the book at him. Authorities threatened to condemn Schiller’s home by claiming that he was running an illegal rooming house that wasn’t up to code. Got that? Authorities are so worried that homeless people will die in a fire due to lack of appropriately marked exits that they’d rather they freeze to death. As I said, leave your logic at the door of this condemned house.

Of course in this case, as with all of the aforementioned cases, it has nothing to do with the health of the people involved – or the wildlife refuges. It has to do with people setting a good example; one which the authorities do not want you to follow.

In an article recounting the breakfast programs launched by the Black Panther Party in the 1960s and 70s, author Victoria Massie writes “They were achieving where the government was failing. The breakfast program, along with the Panthers’ 59 other Serve the People programs that provided clothing, free medical care, and legal aid, ultimately made them most dangerous because they were becoming more influential.”

That is the crux of punishing good deeds. Filling the gaping chasms purposefully carved by capitalism and its keepers raises people’s awareness; it forces them to reckon with the system they live in and ask whether or not it’s worth protecting – or fighting against. Telling someone about the homelessness problem in the United States is one thing. Showing them how many people are starving in a city that spends millions on the circus but never bread – is quite another.

Hearing about the incompetence of FEMA in disaster areas like Puerto Rico is one thing. Seeing mutual aid workers delivering supplies and helping to build autonomous community aid works – is quite another. In an interview via Act Out! last week, Dezeray Lyn, a medic working with Mutual Aid Disaster Relief, described a situation where her and her fellow aid workers had tried to make use of a water tank that FEMA had in storage. “In this particular case, we tried to get a water tank out and the response was ‘If FEMA helps NGO’s then we’re making the NGO’s look good instead of FEMA looking good. Do you see how that is a problem for us?’”

Before you know it, people will start thinking for themselves; they’ll build autonomous communities that reject the capitalist empire, that reject the corporations that torture, pollute, persecute and loot. And THEN where will we be?!

Last week, Michael Foster, a 53-year old mental health counselor from Seattle was sentenced to three years in jail for turning a valve that halted the flow of tar sands oil through the Keystone XL Pipeline for seven hours in October of 2016. A statement released by Shut It Down Climate Direct Action pointed out that “TransCanada and the State of North Dakota had both pushed for a harsh sentence to deter other climate activists (the prosecution recommended five years).” And that’s not because they’re broken up about the $50,000 that 7-hour stall cost them. That’s a drop in the bucket of oil for them. They’re worried that people will see and hear about what Foster did, and do the same thing. They’re worried that people will hear about these tactics and think, “maybe it’s time for me to do the same.” They’re worried about the good example. 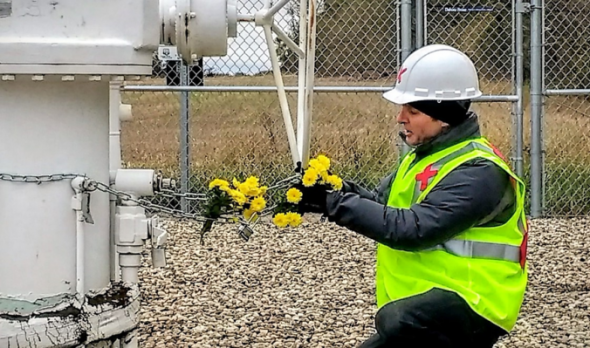 The rows of paper-bag breakfasts were far more frightening than the rifles that Black Panthers carried. That’s not to say that the FBI’s COINTELPRO wouldn’t have launched had the BPP abstained from radical catering. The powers that be have no patience for any form of radical organizing. But what threatens them the most is the threat of a good example. It is the idea that alternatives to their pockmarked power exist. It is the idea that we, the people, are capable of building something that leaves them out – that leaves them with fewer obedient proles, fewer silent laborers, fewer mindless drones doing their bidding.

Sadly, there is no advice I can offer that will circumvent the punishment of good deeds. Having been an activist for more than half my life, I have seen that the most efficient actions and campaigns are often the ones that garner the harshest backlash. I won’t say that everyone needs to be ready to take a rubber bullet (or worse) for the sake of their community. I will say that everyone needs to dare to set a good example. What that looks like will of course vary but in every case, it will be about building. It will not merely be a reactionary response, a reactionary back-on-our-heels fight against the status quo. Rather, it will be the alternative – the world outside the confines of the capitalist empire – that is possible. If it weren’t possible, they would never bother punishing those who share glimpses of it.