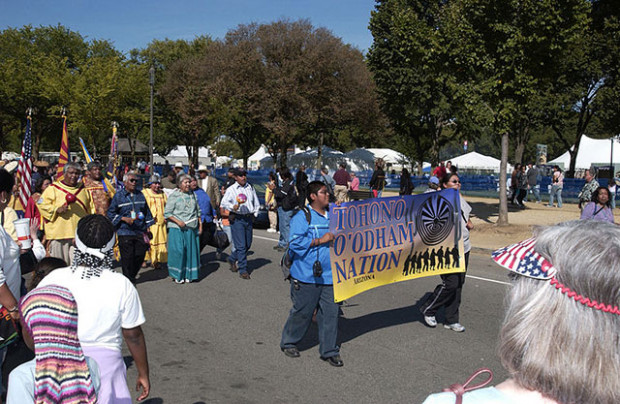 Above Photo: Tribal leaders of the Tohono O’Odham Nation warn that they would refuse to allow a border wall to cut through their land. (Photo: Bill Koplitz / FEMA Photo Library)

We’ve heard time and time again about Donald Trump‘s proposed wall between the U.S. and Mexico and why it’s a terrible idea. But there’s one potential obstacle the president-elect seems not to have noticed: a Native American reservation the size of Connecticut, located directly in the path of his proposed construction.

The Tohono O’odham Nation has existed for thousands of years, straddling the line between the land that is now the U.S. and Mexico. The 75-mile stretch of land in southern Arizona has already been cut in half by a steel fence and border patrol agents, but the tribe’s leaders have warned that if Trump attempts to build his wall, they would refuse to allow it to cut through their land.

Their reasons are many: The wall, they say, could be devastating for local animals and wildlife, cutting off the water that flows across the border. It would also block tribe members from accessing and caring for sacred burial sites in Mexico, a task already complicated by the border fence. And while 28,000 O’odham tribe members make their homes on the U.S. side of the border, there are still nine communities within Mexico.

In recent decades, increasing border security has taken a toll on the O’odham way of life. While decades ago, a barbed wire fence was the only barrier across the border, tribe members could move across the land with relative freedom. But in 2006, Congress passed the Secure Fence Act, which lined the borders with checkpoints and more secure fencing.

Initially, the reaction was positive — tribe members believed the checkpoints would help prevent drug cartels from crossing the reservation illegally. However, in the past ten years, they say it’s become increasingly militarized and now directly challenges their way of life.

While it may seem reasonable to have the tribe members produce identification and passports each time they cross, they’ve accused border control officials of abusing their power. Members of the Tohono O’odham Nation have found themselves detained and even deported while attempting to honor their cultural and spiritual traditions. With a massive wall in place, these struggles will become amplified even more.

The wall isn’t the only concern being voiced by the community: Wall or no, the Department of Homeland security has proposed building 15 permanent, fixed towers along the border for 24-hour surveillance.

Because the nation is recognized as an autonomous tribal government, the Bureau of Land Management would need the tribe’s approval for any changes to land use. In order to push through construction of the wall, Trump would need to pass a stand-alone bill condemning the land and removing it from the Tohono O’odham trust.

Hopefully, matters won’t come to that. But if Trump attempts any such action, he should keep in mind the ongoing Standing Rock protests. The anti-pipeline protests have shown not only that native communities are willing and able to band together to protect their historic land and way of life, but that there are many from outside the tribes who are also passionate about defending the cause. If Trump tries to force his wall through the Tohono O’odham Nation, he’s in for a fight.