Thousand Protest In Iowa Against Restrictions On Collective Bargaining

Above Photo: Hundreds of people make their way around the Iowa Capitol during the March for Iowa’s Teachers in opposition to proposed changes to Iowa’s collective bargaining laws on Sunday, Feb. 12, 2017, in Des Moines.  (Photo: Kelsey Kremer/The Register)

More than a thousand people supporting teachers and other public employees gathered in front of the Iowa Capitol Sunday afternoon urging legislators to not rewrite Iowa’s collective bargaining law.

The theme of the March for Iowa’s Teachers was simple: resist and persist.

“This is an attack on every educator, every student and really, every member of the state of Iowa,” Iowa State Education Association President Tammy Wawro said.

Iowa public employees and union leaders have implored legislators to reject a Republican-sponsored collective bargaining bill that would restrict public-sector workers’ ability to negotiate contracts with state and local governments and school districts. The proposed changes would limit contract negotiations only to base wages, cutting out negotiations over issues such as health insurance, evaluation procedures, seniority-related benefits, vacation and overtime policies.

Iowa Republican leaders and Gov. Terry Branstad say reforming the way the state negotiates contracts with its workers is necessary because the current model is in favor of the workers who, they say, receive benefits beyond what private-sector workers typically earn. They say it’s a drain on the state budget.

It has drawn criticism from the state’s 184,000 public-sector union workers, hundreds of whom showed up Sunday afternoon at the Capitol.

In a teacher-dominated crowd, several current teachers and two legislators spoke to the crowd, urging them to contact their state legislators.

“We will not go down quietly,” Wawro said.

“The rights of our teachers and workers are under siege,” Foley said. “It is up to us to stop these attacks on Iowa’s future. As the son of a teacher, I stand before you today as a representation of the 485,000 public-school students who will be adversely affected by this ill-informed and misguided legislation.”

Members of the grassroots organization Iowans for Public Education said they hoped the rally would help spread awareness to others who may not know how exactly this legislation impacts them.

“But defeating these bills is our number one goal for today,” said Tonya Kehoe, a professor at Kirkwood Community College. “That’s why we all came here today. We all share that, no matter what our associations are.”

Kyrstin Shelley, a librarian at Northview Middle School in Ankeny, said if this is really what the public wants, there needs to be public hearings.

William “Porkchop” Lairsey, a member of the Local 347 IBEW in Des Moines, said the act proves how little legislators care about their constituents.

“You start taking teachers’ rights away and diminishing the quality of education, that doesn’t lead to a good future for anybody,” said Lairsey, 40. “Once you get anti-union legislators, it snowballs and is to the detriment of unions and the working class in general. People run on religion and fear of immigration to get into office, then they get into office and worry about corporate interests. It all boils down to money.”

A public hearing is being held at 5 p.m. today at the Iowa Capitol regarding this legislation. 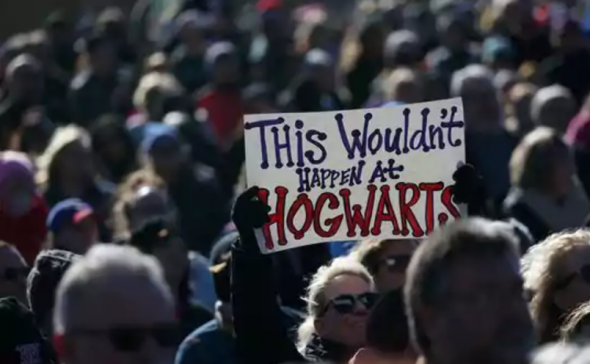 Hundreds of people gather on the steps of the Iowa Capitol for the March for Iowa’s Teachers in opposition to proposed changes to Iowa’s collective bargaining laws on Sunday, Feb. 12, 2017, in Des Moines. (Photo: Kelsey Kremer/The Register)