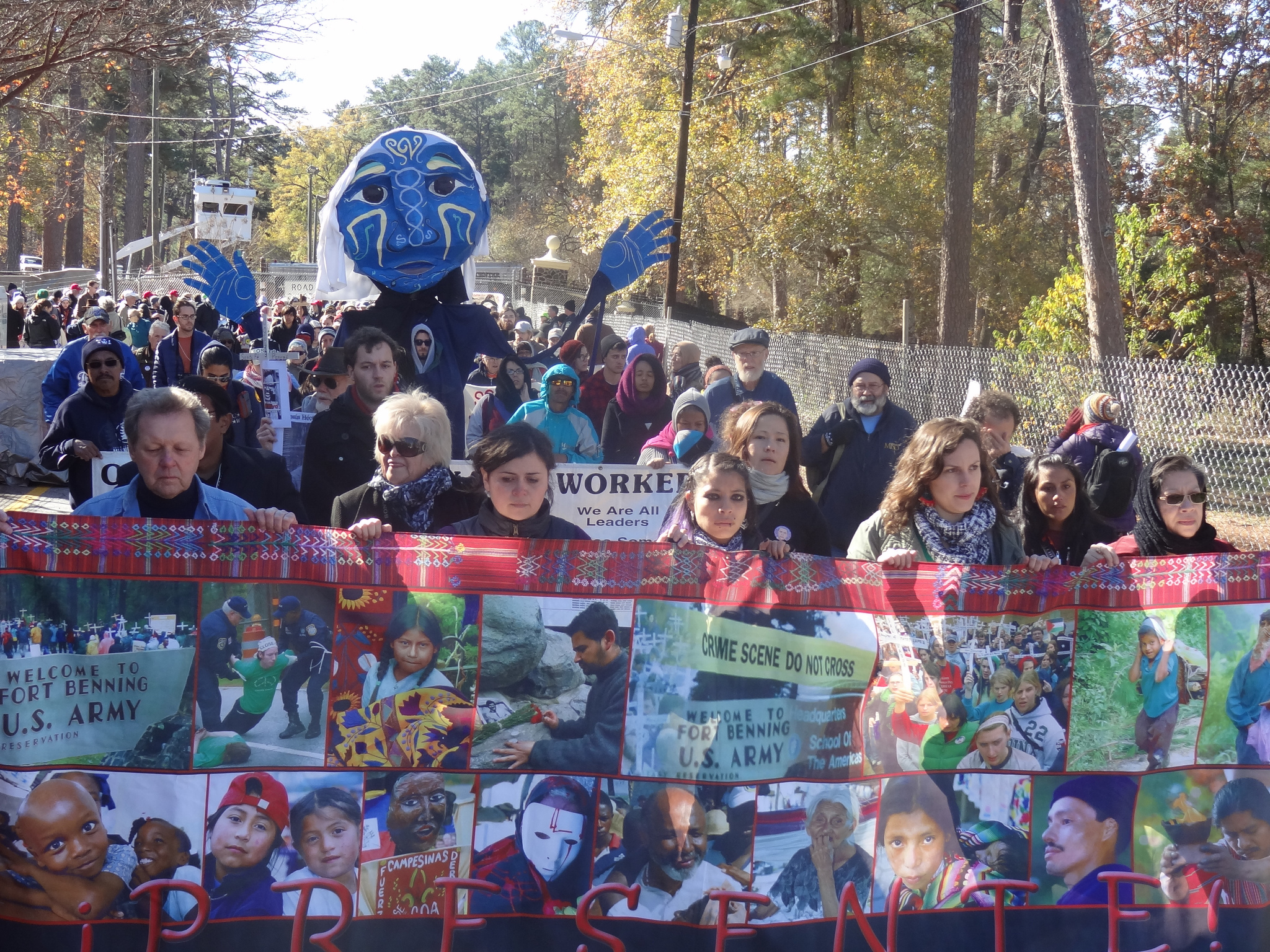 The 2013 November Vigil energized the movement. The weekend gathering was vibrant and featured creativity in many different facets. Many participated for the first time in the annual vigil. On Sunday, November 24, thousands walked in a solemn funeral procession and commemorated those who have been killed by SOA/ WHINSEC graduates and U.S. militarization. The procession transitioned into an upbeat celebration of life and resistance, after Oscar Romero’s last sermon was blasted through the stage speaker system, and a banner with our message, and thousands of soap bubbles crossed over the barb-wired fence.

The vigil weekend included for the first time a Peoples Movement Assembly (PMA) on Saturday morning. As part of the PMA, hundreds of movement activists gathered in small groups and discussed questions about the role of nonviolent direct action in the context of an increasingly militarized prison system. SOA Watch activists are taking the discussion back to their communities. The questions that we are focusing on are: is there a need to shift to other creative ways of continuing the tradition of direct action? What are your thoughts on nonviolent direct action and prison witness considering both our movement’s history and today’s context? The other main question focused on our grassroots organizing strategies. The conversations continue and we are looking forward to everyone’s input.

Stay tuned for a report back from the November Vigil, the Peoples Movement Assembly, the rally at the Stewart Detention Center, and more!
Also, SOA Watch will converge on Washington, DC from March 30 – April 3, 2014! We hope to see you there.

Updates:
12:10: The ROOTED IN RESISTANCE banner goes over the fence: 10:57: The solemn funeral procession to commemorate the victims of SOA violence begins. 10:41: The stage MCs announce that two Honduran campesinos were killed last night as they returned from an election training, as both victims had official electoral duties for today’s election. They were ambushed by masked gunmen with high caliper weapons as they returned home on foot. They died immediately from the shootings.

The incident occurred between 7:30 and 8:00 pm, in the community of Carbon, in the Cantarranas Municipality. Maria Amparo Pineda Duarte was the elected President of the Cooperative. Julio Ramon Maradiaga was an active member. The community is the site of an ongoing land struggle in the area, and both victims were active members in the LIBRE party.

10:30am: Nieves Ayress, a torture survivor from Chile, makes an appeal to the soldiers: “Don’t listen to the generals, don’t attack the people.”

10am: Lorena Cabnal, a Xinka woman from Guatemala, who is a member of the Mesoamerican Women in Resistance, and the co-founder of the Association of Indigenous Women of Santa María Xalapán, talks about the resistance to mining and militarization.

9:50am: Hector Aristizábal, a Colombian artist, actor and human rights activist, who survived torture at the hand of the School of the Americas trained Colombian military, addresses the crowds from the stage.

9:46am: The stage team is reading an update from Honduras, were 18 members of the LIBRE opposition party of Xiomara Castro de Zelaya – including candidates – have been murdered since May last year. Today, the Honduran presidential elections are taking place. (see Saturday report back below for an action alert).

Sunday morning, 9:38am: 36°F (feels like 28°) but sunny and our spirit is high! People from across the United States and from across the Americas are streaming into the vigil site.

Report back from Saturday:

Thousands gathered on Saturday, November 23 at the gates of Fort Benning, Georgia (click here for photos from the rally). T he rally to close the SOA and to resist U.S. militarization was preceded by a People’s Movement Assembly (PMA) at the Columbus Convention Center, where hundreds of people discussed important movement questions, and shared hopes, dreams and strategies for the future of SOA Watch in 20 groups (click here for photos from the PMA). Tonight, we will gather in the Columbus Convention Center for workshops, panels, trainings, film screenings and a concert.

Tomorrow, on Sunday, we will again converge on the main gates on Fort Benning Road in a massive funeral procession to commemorate the victims of SOA violence and to celebrate the resistance.

While we are gathered here at the gates of Fort Benning, the presidential elections in Honduras are underway.

Honduran social movements have felt the brunt of SOA repression since the SOA graduate-led military coup in 2009. Over 200 social movement activists have been murdered.

Three days ago SOA Watch activists, who are in Honduras to observe the delegation, were detained for four hours at a road block. Last night, the LIBRE party headquarters in Tegucigalpa were raided by armed police. International observers have been harassed. SOA Watch is a member of the Honduras Solidarity Network (HSN). Click here for an HSN action alert.

We will continue to stand in solidarity with the people of Honduras and fight together with them for justice, dignity and self-determination.

We are in contact with our friends in Honduras and will keep you updated throughout the weekend.

For a full schedule of the November Vigil weekend events, visithttp://soaw.org/november/schedule/