After so many days of preparation, and then the real thing, the aftermath of #NODAPLRoseParade is something overwhelming, something epic, something comforting, and something exhausting. Today Water Protectors held true to their commitments and buckled down for the long haul waking up before sunrise, some pulling all nighters to prep the float, others coordinating logistics, and when the time came for us all to march, march in solidarity we did.

I have to say that the venue of the #RoseParade is probably the largest audience this group has seen. And for the most part, in the protests I’ve been a part of, they like to keep us away from the mainstream population: so to take over the Rose Parade today for #StandingRock was something we did with honor and dignity. Coming from all parts of California including as far south as San Diego: we united for one common goal and let our voices be heard. I wasn’t all together sure of how Pasadena would take to us to be honest, the train ride caught me several long stares from USC patrons or Penn State die hards. And I can only imagine what such a convergence would look like, PA vs CA… especially when the cries and banners are donned by Indigenous people (something some people have never seen before). We also had several challenges including a large float and our massive pipeline to tow along with a whole hoard of flags and banners which actually got seen on NBC with @HodaKotb in the forefront! Our hard work was paying off.

As we turned the corner and convened with all the people there to watch the parade meeting them with one of our largest processions I have to tell you: something changed. The people who stood and watched were not intimidated, they were not angry, they knew exactly why we were marching. It was as if they were almost glad to see us, like they could breathe a sigh of relief. And they shouted back with us too! “We feel you!” or “I’m with you too!” or “I stand with Standing Rock” or even “Mni Wiconi!” I was shocked. Women would run up to me and give me high fives, little kids would start to chant on the side walks like they had been doing it all along, at times I would catch some people’s faces and it was as if they were about to break into tears…You can join us. We welcome you too.

We took over the Rose Parade and we did it Native Style. Our dancers danced, our drummers beat the heart beat of the people that kept us going the 5-6miles, we chanted, we ran at times, we kept the crowds at bay, and we maintained our role as Protectors. It was strange to me that the people we would pass who somehow got in the road of the parade almost didn’t want to get out of the way of our massive over weight float, and try as we did to warn them, it was like they thought we were just trying to be a nuisance. But we ARE Protectors, we carry that into our every day actions, we are watching out for the greater good and spreading the word because #DAPL has malicious intentions that seeks to create profit off of the lives of third world dependance on fossil fuels. The North Dakota Access Pipeline will not service the US, its purpose is to pipe over 500,000 barrels of oil daily south from Canada through the US down to Mexico and beyond. In its wake: it will destroy Indigenous land, pollute drinking water, and it will not end there.

The militarization of Standing Rock was immoral and was a result of people standing in solidarity and prayer against profit seeking Energy Transfer Partners: On their own land and treated like trespassers as they went to visit the graves of loved ones. As soon as Trump is Inaugurated, the Pipeline will go forth. In leaked Audio from an ETP board meeting they guarantee the Pipeline will cross the Lake. So, as Water Protectors, we Marched today and we will continue to Stand with Standing Rock. The fight has only just begun. It is time to unite, across all lines, as we are facing a fierce enemy with the backing of our next President and his cabinet.

Today was special and when we finished in our prayer circle, dancing together around our float, with what little energy we had left we came together again. This time to feed each other back the energy we put out. We dance in prayer and we give love to one another, and we send our energy to Standing Rock and to our fallen brothers and sisters and to those trapped in jail. We showed up today and we will continue to fight. We have divested over $40 Million dollars from the banks that fund the Pipeline! That’s double since my last post. Keep the energy, Keep it Positive: Divest. 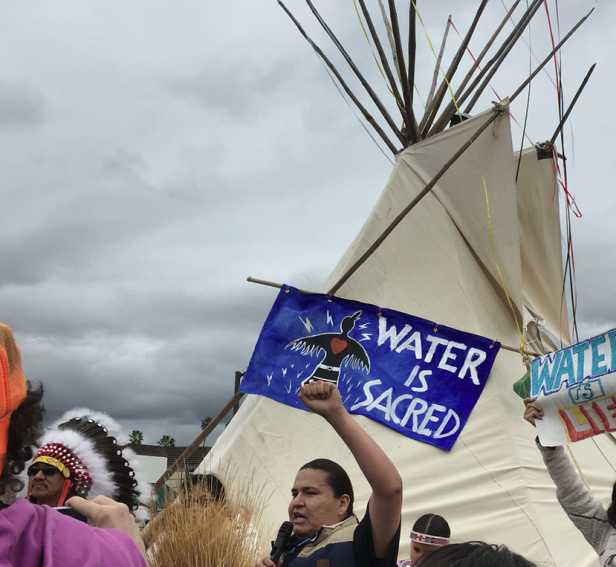