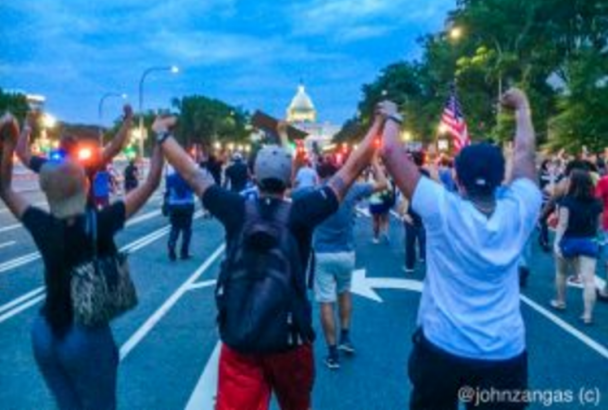 Washington, DC–The shootings of two Black men by police caught on cell phone video prompted thousands to protest at the White House and Capitol building on Thursday night. Infuriated by lack of action to curb police violence against Blacks, a crowd of hundreds even pushed past barricades and attempted to ascend the Capitol steps. Several members of Congress left a floor session to address the protesters.

Thousands assembled at the White House following the release of streaming video posted by the girlfriend of Philando Castile, who was shot by a Minnesota police officer during a traffic stop. Less than 24 hours before Castile’s death, the cell phone video of Baton Rouge police shooting Alton Sterling had gone viral.

Activists speaking outside the White House expressed outrage and anger and vowed to take more drastic steps to enact change if the elected officials did not respond adequately. They condemned Obama Administration actions taken thus far as ineffective in stemming the growing tide of police violence against minorities.

The crowd had grown to several thousand before marching up Pennsylvania Ave. towards the U.S. Capitol. As the crowd moved through traffic, motorists blew horns in support and others joined the march. Protesters chanted, “Black Lives Matter,” and “No Justice, No Peace.” The heat of the night drove the marchers forward, fueling their anger as they reached police lines at the Capitol.

Once there, police attempted to stop the protesters, warning them anyone going past the barricades would be arrested. Then hundreds simultaneously pushed barricades over, shouting “Hands up, don’t shoot!” and went to the base of the steps of the Capitol. Police fell back but met protesters a third time at another set of barricades at the foot of the steps. Police warned mace would be used if anyone attempted to go up the steps.

At this point, forty members of Congress, including John Lewis and Maxine Waters, came down the steps and joined the protesters. They thanked protesters for their courage and spoke about the civil rights movement they had been involved in. But they were shouted down by angry protesters who chanted, “Do your job!” and “Let us speak!”

The members of Congress then joined the protesters to march back towards the White House, leading them away from the Capitol. This diffused much of the immediate anger and prevented the situation from getting worse.