Above: The Poor People’s Campaign ends 40 days of action in Washington, DC on June 23, 2018. They plan an ongoing campaign to fight for economic, racial and environmental justice as well as challenge the war economy. Photo by John Zangas, DC Media Group.

Thousands of people protesting systemic racism and poverty marched to the Capitol on Saturday but were barred from entering the grounds by U.S. Capitol Police. A long line of officers blocked the South Lawn and halted a march organized by the Poor People’s Campaign–a revival of Martin Luther King, Jr.’s movement 50 years ago—at the Capitol Reflecting Pool. 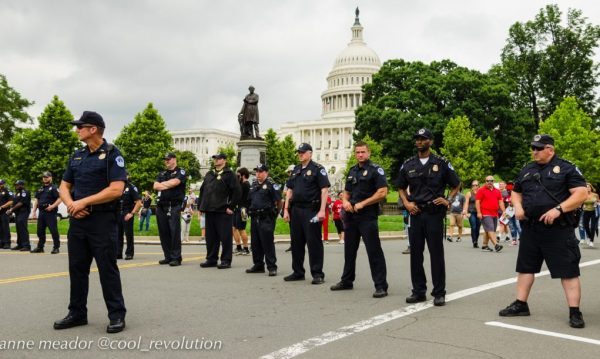 Rev. William Barber and Rev. Jesse Jackson pressed police to allow them to proceed to the Capitol Lawn and conclude their march with the delivery of petitions demanding Congress allocate resources for the poor and struggling workers. U.S. Capitol Police Captain John Erickson, however, refused on the grounds that a large group needed a permit to demonstrate. An agreement was eventually worked out for petition boxes to be carried by individuals one at a time to the Capitol steps.

The march wrapped up 40 days of protests, rallies and civil disobedience actions in Washington, DC and around the country. Many prominent civil rights activists took part, some of whom were founding members the 1968 Poor People’s Campaign.Barber and Jackson gathered the crowd in prayer. “There is no black and white. We’re all precious in God’s sight,” Jackson said, leading the others in a call-and-response. He concluded with “We’ll all remember in November,” referring to the midterm elections.

Rev. Barber reviewed the victories of the campaign so far, saying it had been the goal to shift the narrative and get the attention of the international community. They had engaged in simultaneous civil disobedience in 40 states, registered voters in poor communities and put issues on the record at a hearing in Congress. The campaign will continue as a multi-year organizing and get-out-the-vote effort.

“We know how to fight, and we’re committed to do it,” said Rev. Barber. “I got a feeling everything’s going to be all right, you know Martin’s done told us,” Rev. Barber sang with the crowd.

Drawing from Dr. Martin Luther King, Jr.’s Letter from Birmingham Jail, Rev. Barber outlined actions Poor Peoples Campaign would pursue in the coming months. “We learned from our non-violence training that you only have the authority to shut it down when you have given your adversary clear understanding of what you want, why you want it, and you’ve attempted to give them the opportunity,” he said.

He was critical of police for not letting them deliver their demands to Congress. “We remember this month [June 1968] when they tried to kill the Poor People’s Campaign, snatched them away, ran them out even after they had permits. Now today they won’t even give you a permit to be on the mall,” he said. 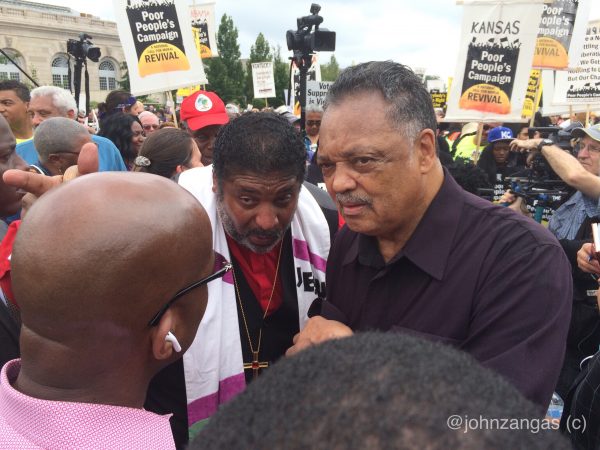 Actor Danny Glover was also among civil rights leaders walking with the lead banner. “We see the contradictions with this administration all the time. Now we have to gather a mass mobilization, a real mass movement to change and that’s got to take place in many ways,” he said. He urged anyone feeling discouraged to keep going. “When you hear the dogs barking, keep going. When you think they’re going to catch you, keep going,” he said, drawing from the words of Harriet Tubman.

The original Poor People’s Campaign of 1968 was a march of nine caravans from different cities to Washington, DC. Once they arrived, they set up Resurrection City, a tent area for permitted tent city of homeless on the National Mall. It was led by Rev. William Abernathy who took on Dr. Martin Luther King, Jr.’s vision after he was assassinated in April of that year.