About a dozen free speech rally participants held their event in a heavily barricaded gazebo in the commons and left early under police escort as they were surrounded by thousands of counter protesters.

The small band of racists are now slinking back to the shadows. Get the F out of #Boston!#BostonFreeSpeech #bostoncommon #BLM #GeeksResist pic.twitter.com/oh86OD7PaZ

This is the second free speech rally organized by the group this year. WBUR reports about the first one:

On May 13, a group of veterans, ex-police, Tea Party Republicans and young people affiliated with the self-described “alt-right” — a conservative faction that mixes racism, white nationalism, anti-Semitism and populism — gathered around the Common’s historic Parkman Bandstand.

Organizers claimed that they were honoring their First Amendment right to assemble and express radical viewpoints. But the event felt more like a small, right-wing rally than a celebration of the Constitution.

Speakers like Augustus Invictus, a political activist from Florida, used their speaking time to encourage attendees to arm themselves for another civil war.

But that rally passed mostly unnoticed, attracting relatively small crowds: a few hundred at the rally and a slightly smaller crowd protesting it.

Happening just a week after the white supremacist rally in Charlottesville, Virginia, in which one counter protester, Heather Heyer, was killed and dozens were injured, the right wing rally and response to it were markedly different this time.

For starters, absent were the militias and bold threats of violence. The organizers of the free speech rally tried to distance themselves from white supremacy and violence this time around, issuing a warning to attendees.

However, according to the The Anti-Defamation League’s statement on the rally, that distinction is fuzzy:

It has been organized under the auspices of the alt lite, which embraces civic nationalism, rather than the alt right, which advocates white nationalism. The exception in this case is scheduled speaker Augustus Invictus, who was actively involved in the Charlottesville planning and works closely with the alt right.

The alt lite, sometimes referred to as the New Right, is a loosely-connected movement whose adherents generally shun white supremacist thinking, but who are in step with the alt right in their hatred of feminists and immigrants, among others. Many within the alt lite sphere are virulently anti-Muslim; the group abhors everyone on “the left” and traffics in conspiracy theories.

But while the alt right and alt lite are theoretically distinct, there is crossover between them. There are a number of people and groups who walk the line between alt right and alt lite, to the extent that it’s not always easy – or even possible — to tell which side they’re on. The Proud Boys, an alt lite, right-wing activist group founded by Gavin McInnes and dedicated to “Reinstating a Spirit of Western chauvinism,” is a good example of a group toeing that line. McInnes renounced the Charlottesville event as “racist,” but a number of Proud Boys were spotted at Unite the Right, including rally organizer Jason Kessler.

On Monday, McInnes announced that his group “disavowed” the event altogether, tweeting, “I am not going to the Boston rally anymore.” Also on Monday, Cassandra Fairbanks, far-right troll and alt lite activist, announced on Twitter that she was bowing out of Boston. “I’m not going to speak at the Boston free speech rally,” she tweeted on Monday morning. “The threats keep escalating and people are unhinged [right now].”

As we have seen with the events in Charlottesville and around the country, white nationalists are emboldened by the current political administration and growing police state. Rallies and marches organized by white supremacists are more prevalent than in recent years, and—as always—it is the most marginalized who are left vulnerable.

Walk with us as we march from the Reggie Lewis Track and Athletic Centerto Boston Common (1.9 miles) and Rally for Black Lives, LGBTQI Lives, Indigenous Lives, Palestinian Lives, Cape Verde Lives, Latinx Lives, Jewish Lives, and all who are marginalized! We will meet in front of the Reggie Lewis Athletic Center at 10am before marching to Boston Commons to demand justice and stand in defiance of white supremacy.

The turn out from the right wing was minimal while an estimated fifteen to twenty thousand counter protesters participated. 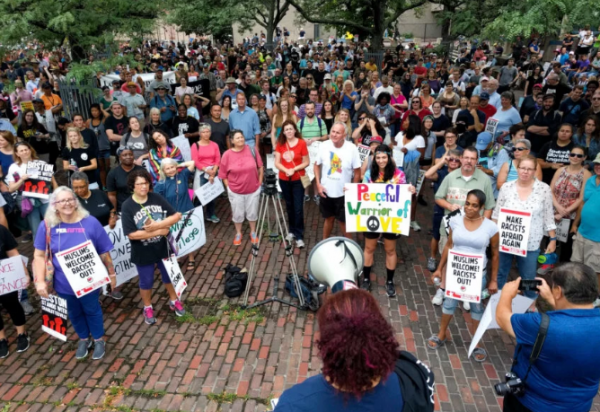 Protesters are starting in Roxbury, near the Reggie Lewis Track and Athletic Center, and will march to the Boston Common. Nicholas Pfosi for The Boston Globe

People are gathering here on he Common in front of the Statehouse. Chants of “No Nazis! No KKK” pic.twitter.com/v9PyohrNZL — Meghan Barr (@meghanbarr) August 19, 2017 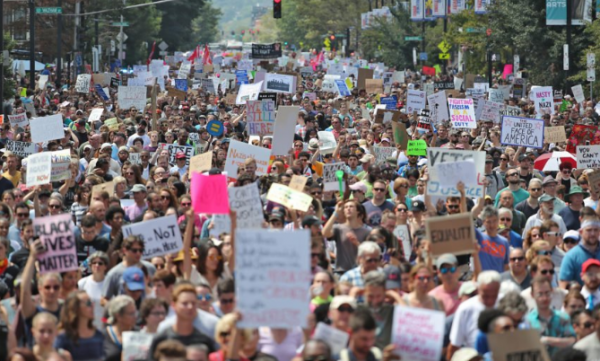 Look at #Boston showing up pic.twitter.com/0cCZ5Kk33K

The fascists are outnumbered 1000 to 1. #Boston representing today. #FightSupremacy pic.twitter.com/h8MU9QWbGs