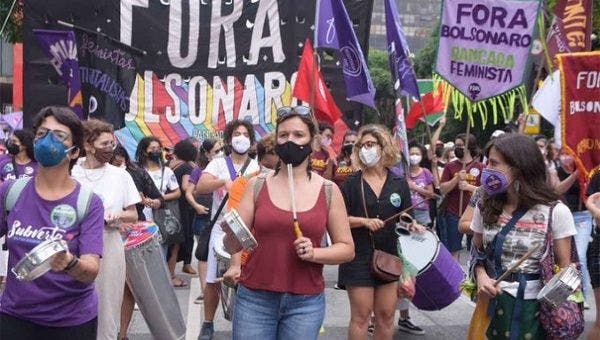 “We see that black women, women from poor neighborhoods, and Indigenous women are the ones who have been most affected… this government must be stopped,” a gender activist stressed.

On Saturday, thousands of Brazilians took to the streets to demand the removal of President Jair Bolsonaro, who is being investigated by the Supreme Court for crimes related to the dissemination of fake news about COVID-19 and vaccines. This happened in a country that has counted over 615,000 deaths since the pandemic began.

The mobilizations against the far-righ President were summoned by organizations such as the Brazilian Women Articulation (AMB), the Women’s World March (MMM), the Unified Black Movement (MNO), the Landless Rural Workers Movement (MST), the Union of Blacks for Equality (UNEGRO), the Workers’ Party (PT), the Socialism and Freedom Party (PSOL), the Communist Party of Brazil (PCdoB), the Central Unitary of Workers (CUT), and the Central of Workers of Brazil (CTB).

In Brasilia, the protests took place at the commercial sector, near the Galeria metro station, and in the Marielle Franco Square, a public space that honors the memory of the Socialist councilor who was murdered by paramilitary groups in Rio de Janeiro.

“It is important for us to remove Bolsonaro, even one day before his government ends,” the Semperviva activist Sonia Coelho said, stressing that it is impossible to coexist with an administration that destroys people’s rights every day.

HOW COULD THIS MURDEROUS NAZI CRIMINAL POSSIBLY BE VOTED INTO POWER??? #brasil #brazil #nazi #fascist #bolsonaro

The Uprising Against Femicide activist Rita Andrade stressed that Bolsonaro has dismantled public policies that generated important social advances in the fight against poverty and inequality.

“We see that black women, women from poor neighborhoods, and Indigenous women are the ones who have been most affected in this scenario… this government must be stopped. There is not the slightest possibility of continuing with it,” she said and denounced that the Bolsonaro administration is directly responsible for thousands of lives lost during the pandemic.

During the mobilizations, human rights defenders and gender activists recalled that they warned about the danger of electing the Captain in the 2018 presidential elections. They also called for popular unity to prevent Bolsonaro from trying to seek reelection.

Brazilian feminist movements called thousands of people to the streets today in 18 cities, supported by the labor unions and social movements, to demand "Bolsonaro Never Again". My report from the protest in São Paulo for @telesurenglish #4DBolsonaroNuncaMais #BolsonaroNuncaMais pic.twitter.com/heCCB6UPnZ