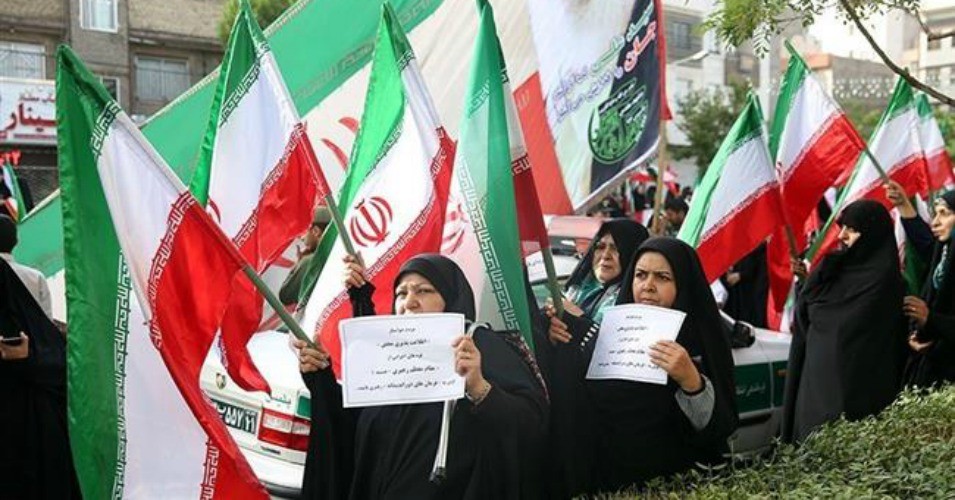 Above: Iranians rally in the holy city of Mashhad on May 11, 2018 to condemn the United States for its withdrawal from the 2015 nuclear deal with Iran. (Photo: Tasnim News Agency)

“At dinner tables and in bakery lines and taxi pools, people across Iran are discussing their traumatic memories of life under punishing sanctions.”

Cities across Iran saw thousands of demonstrators pouring into the streets to express fury over President Donald Trump’s violation and abandonment of the 2015 nuclear deal, negotiated by the Obama administration, Iranian officials, and several other world powers.

Demonstrators took to the streets in cities across Iran to protest President Trump’s decision to pull out of the 2015 nuclear deal.

Protesters in Tehran and other cities carried posters which read, “Mr. Trump, you are talking nonsense,” as they echoed Iranian Supreme Leader Ali Khamenei, who on Wednesday accused the U.S. president of telling lies about the deal and calling his decision to withdraw from the agreement both “silly” and “impudent.”

“The imbecile Trump’s pretexts and insane move following a psychological war and breach of contract and unilateral pullout from the [nuclear deal] and his idiotic remarks against the powerful Iran revealed again the imperialistic nature of the criminal American leaders,” one group of protesters in Tehran said in a statement.“With God’s help, we will stand up and resist until the full destruction of the enemies of Islam and the oppressed nations of the world, especially the world-gobbling America.”

Trump’s decision to end U.S. compliance with the deal, officially known as the Joint Comprehensive Plan of Action (JCPOA), was made over the objections of international leaders including French President Emmanuel Macron and German Chancellor Angela Merkel, who personally lobbied the president to honor the agreement—as well as 63 percent of Americans, according to a CNN poll.

A small group of lawmakers in Iran burned paper U.S. flags in Parliament on Wednesday, with Speaker Ali Larijani saying, “It is obvious that Trump only understands the language of force.”

If the deal collapses completely, international monitoring of Iran’s nuclear facilities and restrictions placed on the country’s nuclear program could end, while sanctions demanded by the U.S. on the Iranian oil industry and other sectors could be reimposed.

For average Iranians, many of whom attended Friday’s demonsrations, wrote Amir Ahmadi Arian and Rahman Bouzari in the New York Times on Thursday, the news of Trump’s move “elicited feelings of bitterness and resignation.”

“At dinner tables and in bakery lines and taxi pools, people across Iran are discussing their traumatic memories of life under punishing sanctions,” the Iranian authors wrote. “Iranians now experience the disturbing prospect of crippling inflation, budget cuts, delayed payments and shortages of basic goods, especially imported medication upon which many lives depend.”