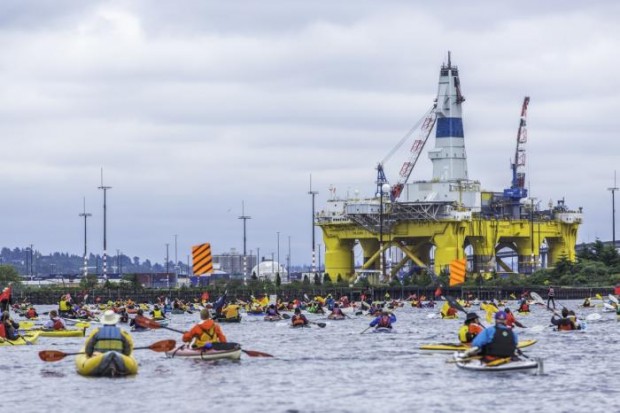 Above photo and all photos on this page by David Rosen of the Seattle Herald.

Note: The day before the event reported Elizabeth Lakes of the Backbone Campaign wrote:

“The seeds of a better world have found fertile ground in our hearts, hands, and imaginations. I feel honored to work with all of you. And like Arundhati Roy has said ‘Another world is not only possible, she is on her way. On a quiet day, I can hear her breathing.'”

Thousands of kayaktivists took to the water on Elliott Bay to protest against Shell’s hideous oil drilling rig, The Polar Pioneer on May 16, 2015. People from sHellNo.org, Greenpeace, and other organizations as well as many media outlets from around the US showed up to support and document the huge flotilla event.

Seattle Police, US Coast Guard, and other security vessels were out and set a safety perimeter from the kayaktivists from getting too close to the drilling platform and all of the protesters were peaceful and respectful. The safety zone around the rig was 500 yards and the protestors couldn’t enter closer than that.

Zoe Buckley Lennox, a student/volunteer for Greenpeace spoke to the Herald, ” My mission is to stop Arctic drilling of course and at the moment I’m here to help shine a light on the fact that Shell has already brought their rigs here and planning on heading up to the Arctic and drilling for oil in the next 60 days, knowing well that there may be a 75 percent chance there might be a massive oil spill if they do go up there and develop.”

“The crew of the Greenpeace Esperanza and myself, followed the rig across the Pacific Ocean keeping an eye on it and then eventually boarding the platform on the high seas and occupied it for six days and to spread the message that Shell is planning on doing this. It was great and fun, I loved climbing it but it was a bit scary because the rig was so massive but we were all well trained for the experience.” Lennox said.

The event took place this morning around 10 am near Seacrest Marina and lasted throughout the day. They had a barge out on the water for public speakers and performances by musicians and tribal people. There were also information booths at Jack Block Park.