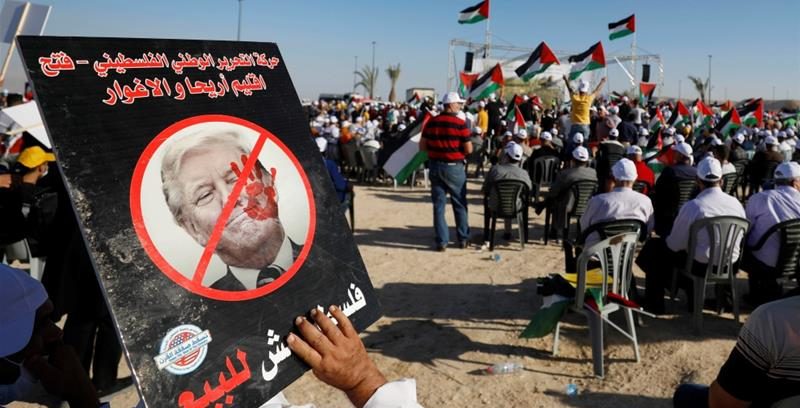 Above photo: A demonstrator holds an anti-US President Donald Trump placard during the rally. Mohamad Torokman/Reuters.

Thousands of Palestinians have rallied in Jericho to protest against Israel’s unilateral plan to annex large swaths of the occupied West Bank and Jordan Valley.

British, Chinese, Russian, Japanese and Jordanian diplomats were also at the rally.

Citing the presence of the dignitaries, Al Jazeera’s Nida Ibrahim said: “Palestinians hope that by doing gatherings like this, they would pressure the international community.”

“They want the foreign diplomats to [speak] to their countries to pressure Israel not to move forward with its plan,” she said from the Jericho rally. “They want these countries to tell Israel that they are going to impose sanctions.”

Israel has promised to annex illegally-built Jewish settlements and the Jordan Valley, moves that were detailed in a controversial plan unveiled by US President Donald Trump in January.

Such a development could spell the end of the long-stalled peace process by making it virtually impossible to establish a viable Palestinian state.

Trump’s plan foresees the eventual creation of a demilitarised Palestinian state on the remaining patchwork of disjointed parts of the Palestinian territories without occupied East Jerusalem, which Palestinians want as the capital of their state.

The Palestinians have rejected Trump’s plan but the Israeli government of Prime Minister Benjamin Netanyahu has said it could begin the annexation process from July 1.

At the Jericho event, Mladenov said if the US-backed annexation plan proceeded, it could “kill” peace and Palestinian statehood.

“The UN believes annexation is against international law,” Mladenov said, reiterating the world body’s long-held position. “If it happens, it might kill the very idea that peace and statehood for the Palestinian people can be achieved through negotiations,” he added.

Mladenov urged the Palestinians to oppose the Israeli plan by peaceful means.

“People of Palestine do not despair … do not stray away from the path of non-violence,” Mladenov said.

“You’re not renting a home, this is your home. Do not lose sight of the goal of a free Palestinian state … next to Israel.”

Von Burgsdorff said steps taken towards annexation would not pass unchallenged, adding that the EU, which has also rejected Trump’s plan, would continue to support a negotiation process towards the two-state solution as the only way to fulfil the aspirations of both people, according to Palestinian news agency Wafa.

“The unresolved final status issues must be decided through direct negotiations between both parties, this includes notably the issues related to borders, the status of Jerusalem, the refugee questions, and of course security,” he said.

The event was held despite gatherings being banned due to a surge in coronavirus infections.

The number of coronavirus cases in the occupied West Bank has more than doubled in a week, the Palestinian Authority (PA) said on Monday, after warning a possible second wave of infections could be worse than the first.

The Palestinian health ministry on Monday reported 142 new infections, the highest jump in a single day since the start of the pandemic.

However, Ibrahim said PA officials have allowed gatherings against the planned annexation to take place due to the importance of the issue, with more events planned in the coming days and weeks.