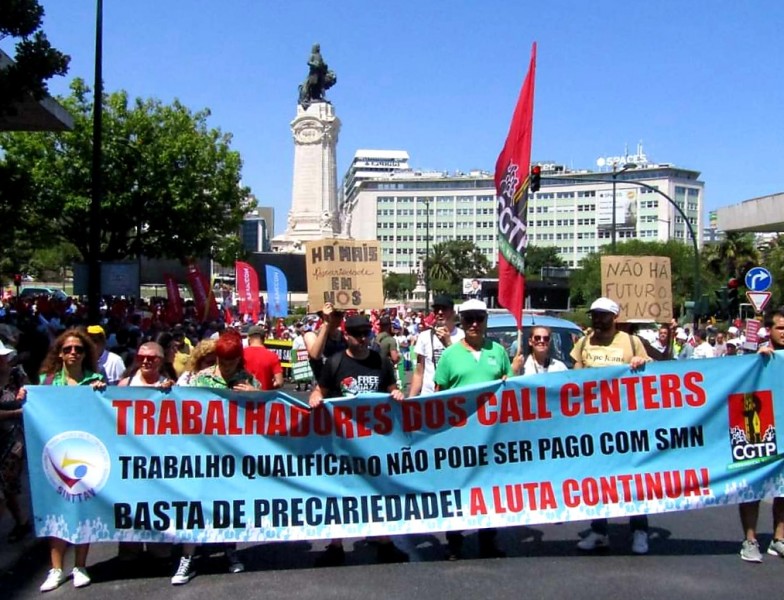 Above Photo: Portuguese workers march in defense of their standard of living. Fight Back! News / staff.

People traveled from across the country to gather in Lisbon, the capital city of Portugal. Many traveled by train from Porto, the biggest city in the northern region of Portugal, where the train departed from Campanhã Train Station with around 800 protesters aboard.

The thousands converged on Marqués de Pombal Park in Lisbon then marched to the Portuguese parliament. They demanded a 35-hour work week without salary reduction, a minimum salary of €850 (around $865), an end to employment insecurity, and permanent work contracts to avoid financial instability. They also demanded pension adjustments to keep up with the rising cost of food and housing.

Many call center workers joined the protest to speak out against their job insecurity, inflation and stagnant wages.

The protesters chanted, “A luta continúa,” which in Portuguese means “The struggle continues!”

The Confederação Geral de Trabalhadores Portugueses (General Confederation of Portuguese Workers – CGTP) organized this demonstration to strengthen the fight of the Portuguese people against neoliberalism and to stand up for union rights, for better working conditions and for increased investment in public services and social functions of the state.

Jerónimo de Sousa, General Secretary of the Portuguese Communist Party joined the protesters to express solidarity and commitment to the struggles of Portuguese workers.

In spite of the hot weather during the march, the protesters succeeded in expressing their disagreement with the growth of social injustice and disparity in the context of the COVID pandemic.