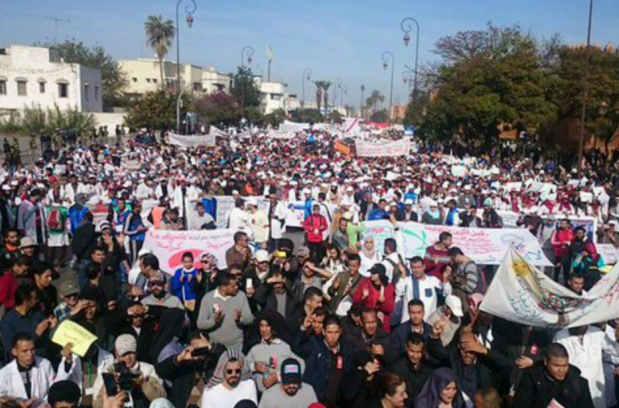 Thousands of demonstrators in Morocco have defied a government ban to march in a tense protest over planned cuts to Morocco’s education system.
Marchers on Sunday chanted “We’re prepared to go to prison” as they neared the parliament building in Rabat, Morocco’s capital.

Teacher trainees have been protesting against the cuts around the country for the past few months, and the response from security forces during demonstrations has frequently been violent.

“The Moroccan authorities should make sure the police and security forces don’t use unnecessary violence against demonstrators and to hold accountable anyone who does,” said Eric Goldstein, deputy Middle East and North Africa director of Human Rights Watch.

Riot police were scattered along the route of Sunday’s march.

Wadi Al-Mrimar, one of the protest organisers, said police followed his bus en route to the protest.

Last week, Moroccan Prime Minister Abdelilah Benkirane was forced to offer a deal to teacher trainees following nationwide protests that resulted in the use of force by police.

However, protesters were dissatisfied with the offer and plan to continue their campaign.

“I have three children, and I thought we had finally found a job for one, but it doesn’t seem so,” Hassan Dehih, who came from the city of Kenitra to support his daughter, told Reuters. “At least if they beat her, I will be beaten too.”

Next month will mark the fifth anniversary of when Moroccans took to the streets as part of the “Arab Spring” protests.