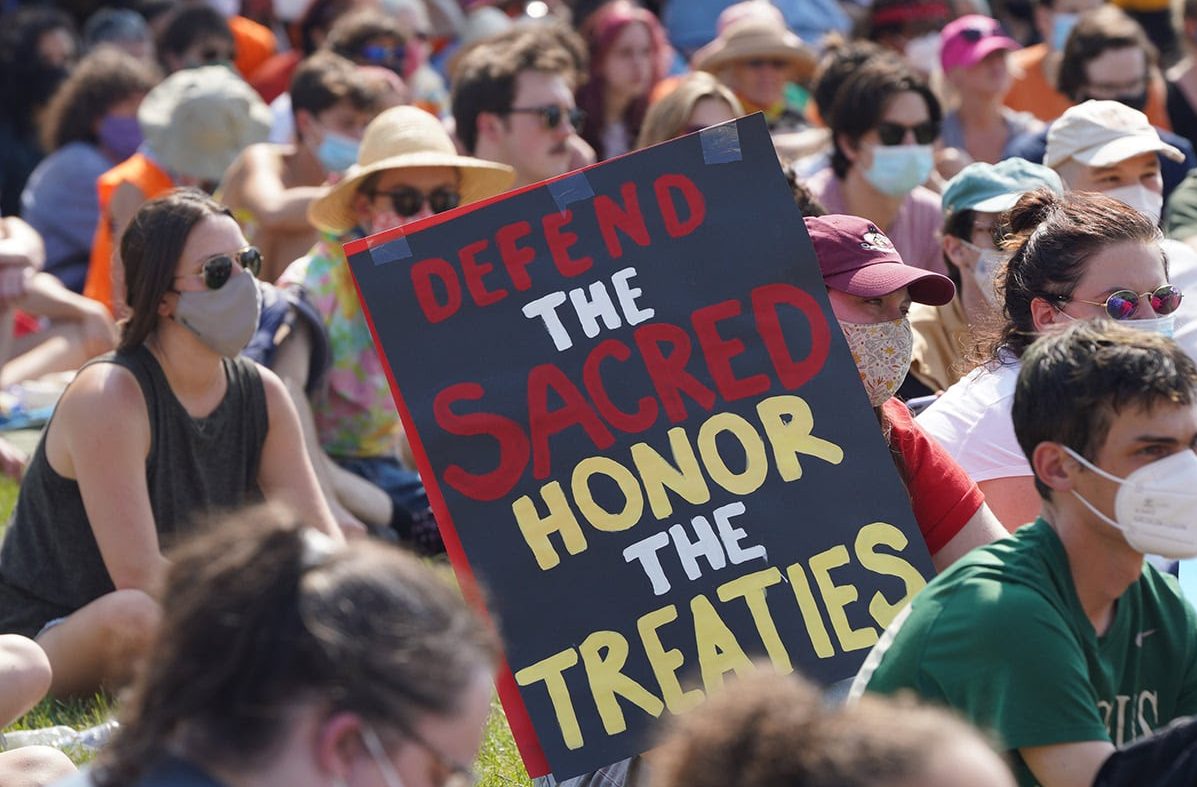 Thousands Of Water Protectors Rally At The Minnesota State Capitol

St Paul, MN – On Wednesday afternoon, more than 2,000 water protectors gathered outside the Minnesota State Capitol for the Treaties not Tar Sands Rally to stop the Line 3 tar sands pipeline and called on the Biden Administration to revoke federal permits for the project. The rally featured remarks from Indigenous leaders with the movement to stop Line 3, local community organizers for racial justice and Native sovereignty, and Minnesota state elected officials.

The rally began as the Treaty People Walk for Water arrived, the walkers having traveled over 250 miles from the Line 3 pipeline crossing at the Mississippi River headwaters to the Capitol. Hundreds of people joined the last leg of the walk, and all wore orange in commemoration of the missing and murdered Indigenous children who continue to be found across North America.

At the end of the rally, organizers read a statement of demands from the stage criticizing Governor Tim Walz’s support of the pipeline project and his administration’s militarized response to the movement. Water protectors called on President Joe Biden to intervene, “honor our treaties and stop Line 3.” The statement explained that after years of resisting Line 3 through every regulatory and administrative channel, and for months through prayer and direct action on the frontlines, water protectors felt they “ must stay here peacefully and in prayer for as long as it takes to be heard.” In response, nearly 200 people held unpermitted space on the Capitol’s south lawn overnight.

Speaking at the rally, Winona LaDuke of Honor the Earth said, “Our original treaties were with the creator and with the relatives, whether they had wings or roots or paws. That’s our agreement as human beings, our right to be here, and we need to remember and reaffirm that relationship and that original treaty because them guys, the fish and the little clams in the Shell River, them deer, them moose, they can’t talk. That’s us. That’s us that gotta stand up for them.”

Sasha Beauliau, founder of the Red Lake Treaty Camp, called on the crowd to stay committed to the movement. She said, “I hope that all of you aren’t just here today to listen, but that you’re here to stand up and take action with us. This is a long fight, and we aren’t going anywhere.”

(Read: Line 3 opponents not giving up despite nearly complete pipeline project from MPR)

Today, August 26th, marks the fourth day that Indigenous grandmothers from the White Earth Nation have been holding ceremonial space on the Capitol lawn. Today, they will conclude their four days of ceremony with a jingle dress ceremony at 11 AM, as dozens of people continue to hold space.

It’s now official. We will stay overnight at the Minnesota Capitol. We will #StopLine3