Above Photo: A protester is holding a poster saying ‘TUCK FRUMP’ during the demonstration (Picture: EPA)

Note: Despite a ban on protests outside of the World Economic Forum and more than 4,000 Swiss military have been brought in to protect the gathering, protests involving thousands of people went forward, energized by planned presence of Donald Trump. The reason given for the protest ban was there was too much snow to allow them to go forward. Protesters broke through security to reach the Davos Conference Centre. While Trump is the focus of protesters, they recognize the problem is bigger Trump and he is a symbol of broader issues. “Trump is just one of the other people we disagree with. We’ve been protesting every year now against the World Economic Forum and if Trump comes or not we don’t care. Trump is just, maybe he’s just the best symbol of this world,” protester Alex Hedinger told Reuters TV in Davos.

Thousands of people took to the streets of Zurich to protest against Donald Trump‘s presence at Davos.

The US president has planned to attend the World Economic Forum’s annual meeting in Switzerland this week.

In response, anti-capitalist activists called for protests under the slogans ‘Trump Not Welcome!’ and ‘Smash WEF!’

Trump is due to speak on Friday at the WEF meeting in the Alpine town of Davos, an annual meeting of global business and political leaders. 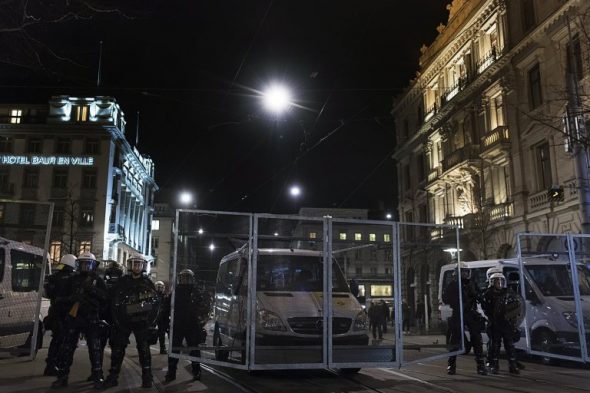 Police forces set off barriers during the demonstration ‘Trump not welcome!’ against the upcoming visit of US President Donald Trump at the World Economic Forum (WEF) in Davos, in the streets of Zurich (Picture: EPA) 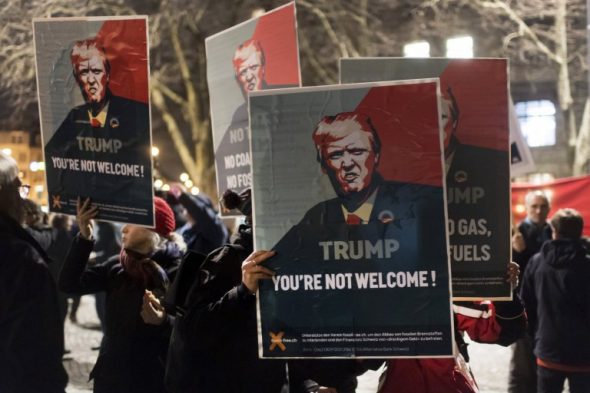 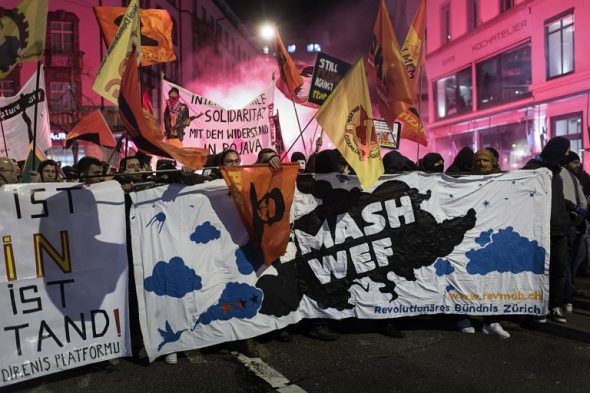 Protesters march during the demonstration ‘Trump not welcome!’ against the upcoming visit of Trump at the World Economic Forum (WEF) in Davos (Picture: EPA) 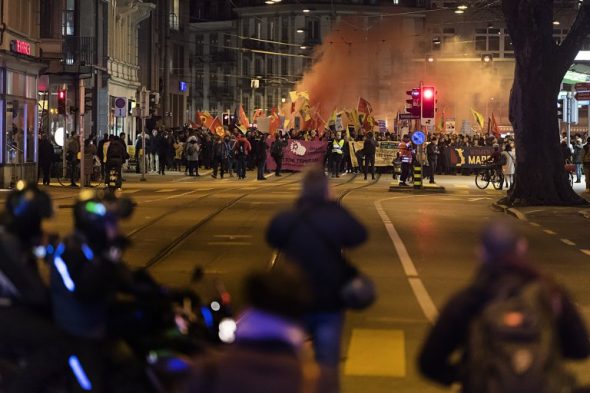 People gather during the demonstration ‘Trump not welcome!’ against the upcoming visit of US President Donald Trump at the World Economic Forum (WEF) in Davos (Picture: AP) 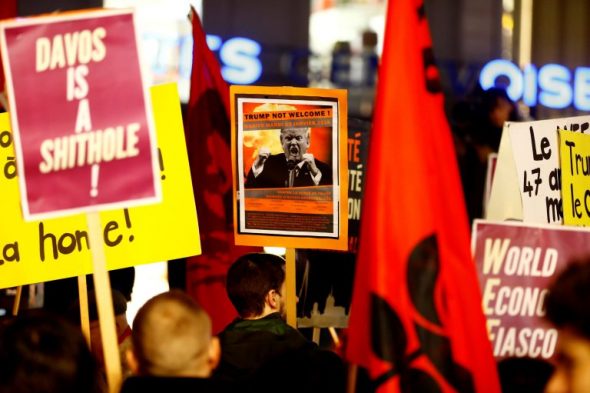 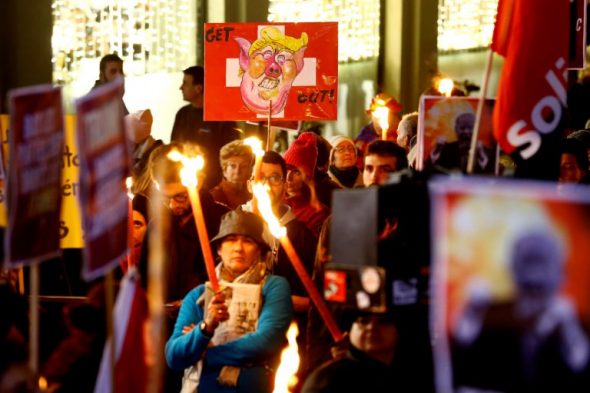 Flag-waving demonstrators carried anti-globalist and environmentalist placards such as ‘No Trump, no coal, no gas, no fossil fuels’ as they marched towards Zurich’s financial district. Bankers working in the borough had been warned in advance to stay clear of the approved and pre-planned demonstration. Protesters in the Swiss capital of Bern staged similar protests on January 13. (Picture: Reuters) 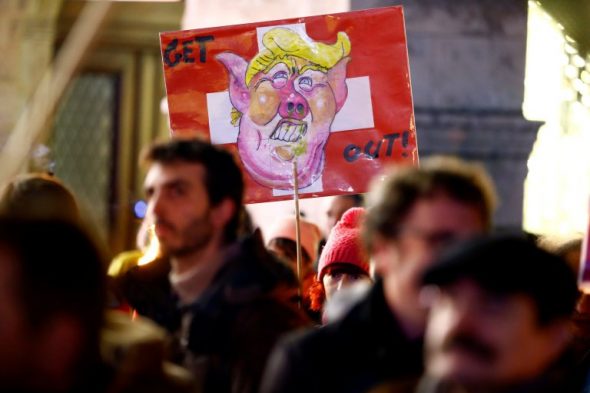 People took to the streets of Geneva as well as Zurich and Bern (Picture: Reuters) 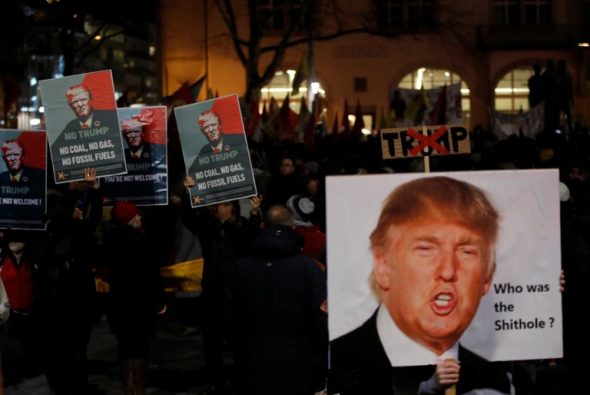 One banner asks, ‘Who was the shithole?’ referring to Trump’s comments about ‘shithole countries’ (Picture: Reuters) ‘Trump Not Welcome’ was spelled out in candles on the ground in Zurich (Picture: AP) 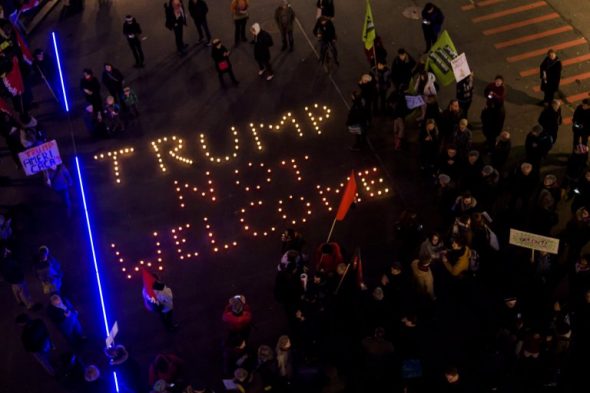 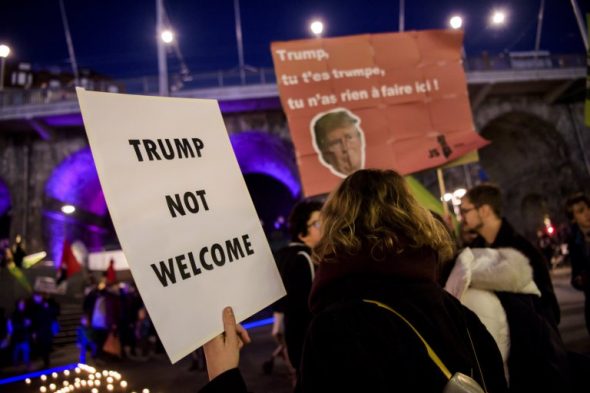 That march went off peacefully, unlike violent anti-WEF protests in several Swiss cities that were held in the early 2000s. More than 4,000 Swiss soldiers have been deployed to guard DAvos, alongside 1,000 police officers. A no-fly zone was also put in place to protect delegates.