Above photo: Protesters against the prorogation of Parliament walk towards the Buckingham Palace in London (Photo: REUTERS/Peter Nicholls)

London – Protesters have marched on Buckingham Palace, in a show of anger at the Queen over her role in permitting the prorogation of Parliament.

The unusual scenes in central London on Saturday come amid protests attended by thousands of people across the UK, in opposition to Boris Johnson’s plan to suspend Parliament from sitting.

Protesters holding signs reading “Defend democracy, resist the Parliament showdown” broke away from the main demonstration in Trafalgar Square to head up the Mall to Buckingham Palace.

The rare sight of protesters outside the Palace comes after the Queen approved Mr Johnson’s request to prorogue Parliament from mid-September until 14 October, shortening the period of time for MPs to thwart a no-deal Brexit.

The Queen’s role is usually apolitical, and academics have disagreed over whether she had the power to refuse the order.

Meanwhile, London Assembly member Caroline Russell was photographed being led away in handcuffs, after reportedly blocking traffic at the Trafalgar Square protest..

A spokesperson for the Metropolitan Police confirmed to i that three people had been arrested at the Trafalgar Square protest, which was addressed by figures including Shadow Home Secretary Diane Abbott. 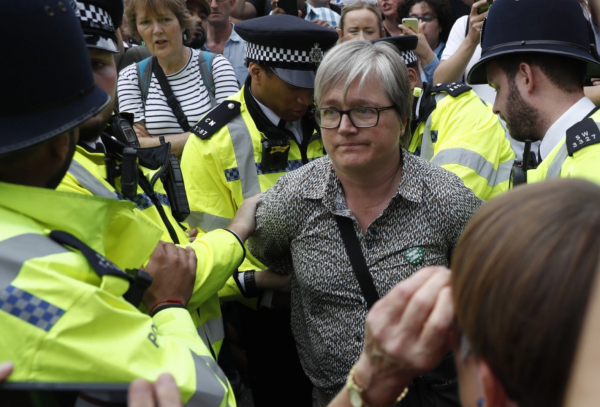 In a statement, Green Party co-leader Sian Berry said: “Earlier today, I was speaking at the main rally of the Defend Our Democracy protest. I said then that we were calmly determined not to have our rights chipped away. Protest, and direct action were needed.

“I’m proud that Caroline has been at the forefront, with others, of showing that determination. History tells us that all the rights we have we had to win. No one has ever handed them to us. “

‘You do not represent us’

The statement claimed that protesters were “defending those hard-won rights that are now under attack from Boris Johnson.”

“We, the people, will come back on the streets again and again in the coming weeks of national crisis to defend our MPs and win our final say.

“We will keep saying to Boris Johnson, to Jacob Rees-Mogg, to Dominic Raab – your actions do not represent us

“If you abuse power, we the people will make sure you won’t be in power much longer.”

Ms Russell has sat on the London Assembly since 2016, alongside Ms Berry.

More from The Guardian:

Tens of thousands of demonstrators took to the streets across Britain and outside the gates of Downing Street in protest against Boris Johnson’s move to suspend parliament. Crowds brandished banners pledging to “defend democracy”, chanted “stop the coup” and waved EU flags in London in a bid to resist the parliament shutdown.

Demonstrators massed at protests in dozens of locations around the country including Manchester, Glasgow, Birmingham, Brighton, Swansea, Bristol and Liverpool.

Labour shadow chancellor John McDonnell labelled Boris Johnson a “dictator” in a stinging attack as he addressed crowds outside Downing Street. He went on to attack the prime minister’s move to suspend parliament, saying it had had “rightfully” been called “a very British coup”, adding: “We have defeated dictators in the past in our history and we will defeat this dictator under Johnson.”

Speaking in Glasgow’s George Square, Labour leader Jeremy Corbyn told the crowd: “I’m proud to be here with all of you supporting that, to say to Boris Johnson no way, it’s our parliament. No way do you take us out without a deal – we will stop you and give the people their rights and their say to determine their future.”

Following the rally outside Downing Street, dozens of protesters blocked traffic at Trafalgar Square by sitting in the road, while others marched towards Buckingham Palace.

In one of the biggest demonstrations the remain voting west country city has seen since the Brexit referendum, up to 5,000 people are thought to have marched in Bristol. Some waved homemade placards emblazoned with slogans like “I have the right to representation”, “shamocracy” and “fuck Boris” while the crowd chanted “stop the coup” and “Boris, Boris, Boris – out, out, out”.

Many were old hands, who had been to lots of remain protests. But others were taking to the streets for the first time. Will Roberts, 39, who was with his wife and two children, had steered clear of protests until now, preferring to let the democratic process takes its course. “I was disappointed with the result but this is worse than Brexit itself,” he said. “Hand on heart, this is really frightening. If you know a bit of history, you’ll know this is the thin end of the wedge.”

Martin Baxter, 67, is holding a “no to racism, no to Boris Johnson” banner. “I think the situation is farcical in this country at the moment. The government we have is headed by a playboy.”

He hopes that the decision to prorogue parliament will be challenged and can be overturned, but is doubtful the situation will work out well for the political parties backing ‘remain’, either way. “I think Mr Johnson doesn’t care what the outcome is, as long as he can blame his political enemies when prorogation is overthrown. He can say: ‘Oh well, if I’d been able to prorogue parliament, then I would have got my deal through and I’d have won. This is all their fault.’ And then there will be a general election.”

“You do not preserve democracy by trashing it,” said Barbara Wibbelmann, 64. “Proroguing parliament is no way to go about delivering Brexit.”

Originally from Germany, she has been living in the UK since 1984 and took out British citizenship shortly after the referendum. “I can see why people don’t like the EU, but we need to change it from within, not without.”

As for Boris Johnson, she says, what he is doing is “very wrong”: “It flies in the face of democracy. People are being excluded from the decisions and their voices are not being heard.”

As usual, some impressive signage in George Square, including my personal favourite, the felted ‘liar’ pic.twitter.com/GjPsyvFHKA