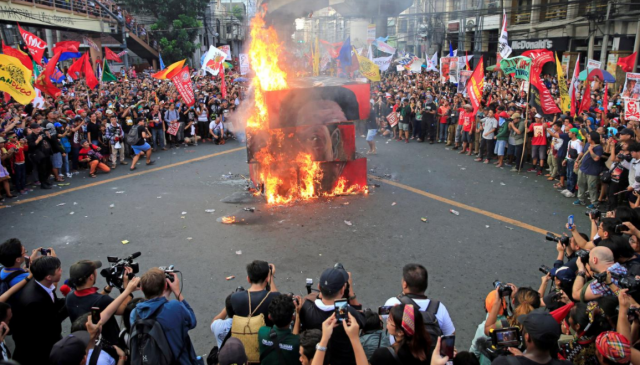 Above photo: Protesters burn a cube effigy with a face of President Rodrigo Duterte during a National Day of Protest outside the presidential palace in metro Manila, Philippines September 21, 2017. REUTERS/Romeo Ranoco

MANILA (Reuters) – Thousands of Filipinos rallied on Thursday to denounce Philippines President Rodrigo Duterte and warn of what they called an emerging dictatorship, in a major show of dissent against the controversial but hugely popular leader.

Politicians, indigenous people, priests, businessmen, and left-wing activists held marches and church masses accusing Duterte of authoritarianism and protesting at policies including a ferocious war on drugs that has killed thousands.

Signs saying “Stop The Killings” and “No To Martial Rule” reflected fears that Duterte would one day deliver on his threat to declare nationwide military rule like that imposed by late dictator Ferdinand Marcos.

The rallies marked the 45th anniversary of the start of that era, remembered by many Filipinos as brutal and oppressive.

Effigies of Duterte were burned, including one which bore both his face and that of late Nazi leader Adolf Hitler.

A protester with a toy gun played dead on the ground in a reenactment of one of a spree of drug-related killings that activists say are executions staged by police. Police reject those allegations.

Anti-Duterte Senator Risa Hontiveros said democracy was under threat by a “Dutertatorship” with a “policy of killing”.

“It’s sad that we seemed to have not learned our lessons,” Robredro said. “There’s a culture of violence around us.”

Marcos declared martial law in 1972 and held power for 14 years until his removal in a bloodless, army-backed “people’s power” uprising. He abolished democratic institutions and was accused of killing, torturing and “disappearing” thousands of opponents.

Duterte has expressed admiration for Marcos. His critics are alarmed by his autocratic rhetoric and a vicious disdain for his detractors.

But he won last year’s election by a big margin and has maintained one of the highest public approval ratings of a Philippines president.

Several thousand turned out on Thursday to show their support for Duterte at a rival rally that entertained crowds with live music, dancing and food.

“This is to tell the people that ‘here we are, we are the majority who are happy with the government and not those few who are just griping’,” said rally organizer Benny Antiporda, a former journalist.

Millions of Filipinos admire Duterte’s down-to-earth style, his decisiveness and even his imperfections.

His supporters at home and among the diaspora see him as a champion of ordinary people and the best hope for change that presidents from the political elite failed to bring.

Others decried what they see as his cozy relationship with the still-powerful Marcos family.

“It seems that what we fought for in 1972, is again back. The total disrespect for human life, dignity, human rights. And that was how we started,” said Rene Saguisag, a former senator and human rights lawyer.