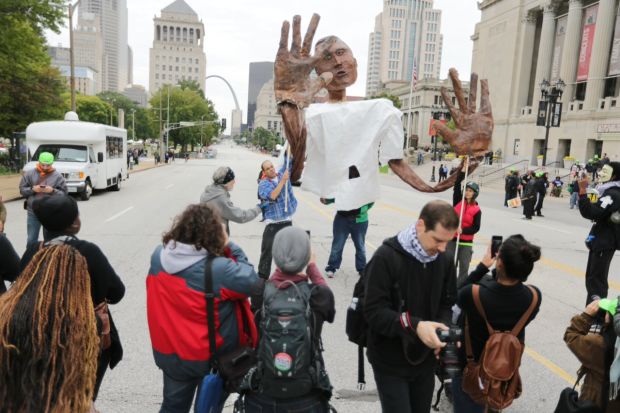 Thousands Rally For Justice In #FergusonOctober

Above: Mike Brown “hands-up, don’t shoot” and below the puppet in the massive crowd seeking justice in Brown’s killing. Photos from the St. Louis Post-Dispatch.

People from coast-to-coast joined the people of Ferguson and St. Louis County calling for justice in the killing of Mike Brown. Below are a series of tweets that give a sense of the massive protest held in St. Louis today.  The St. Louis Post-Dispatch describes the scene:

Thousands of demonstrators from across the country marched in downtown St. Louis Saturday, chanting “We are Mike Brown,” as part of a series of events to protest police violence nationwide.

The march started in the middle of Market Street at 15th Street and ended at Kiener Plaza. The crowd chanted, “Hands up, don’t shoot,””No justice, no peace,” and “United we stand, divided we fall.”

Police used barricades to keep traffic away from the crowd. Officers patrolled on bicycles and foot. But unlike the protests in August after Ferguson Police Officer Darren Wilson shot unarmed teenager Michael Brown, St. Louis police avoided any visible show of force during Saturday’s downtown march.

When asked, Dotson refused to say how many officers he had in the area or how many were staging nearby offsite.

“What’s important is that we’re out here dressed in our normal uniforms. We’re not in tactical gear,” Dotson told the Post-Dispatch. “What’s also important is that everybody has a right to be here and have their message heard.”

Young Nigel waits for the rest of the #FergusonOctober marchers to catch up. pic.twitter.com/p41U76eQOp