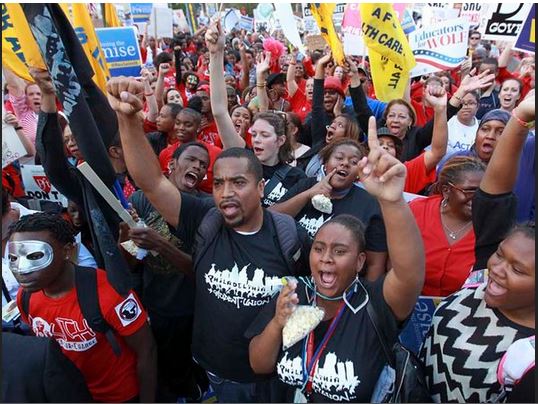 Furious over the Philadelphia School Reform Commission’s move to unilaterally cancel its teachers’ contract, 3,000 people shut down North Broad Street on Thursday, vowing more disruptive action if the panel’s action is not undone.

The eyes of the nation are on Philadelphia, said American Federation of Teachers president Randi Weingarten, in town for a massive rally held before an SRC meeting.

“Philly is ground zero for injustice,” Weingarten told the crowd of sign-waving teachers, counselors, nurses, and supporters. “The SRC has become a morally bankrupt institution.”

“We’re not rolling over and we’re not taking it,” said Jerry Jordan, president of the Philadelphia Federation of Teachers.

Joined by the Pennsylvania Department of Education, the SRC filed a motion for declaratory judgment Oct. 6 in Commonwealth Court to affirm its action, taken to save $54 million by making PFT members pay toward their health benefits. The union is expected to file a counter-motion shortly.

Labor will watch to see what the courts do, said Patrick Eiding, president of the Philadelphia Labor Council, AFL-CIO. If they don’t rule in the PFT’s favor, he said, watch out.

“We will turn this city upside down,” Eiding said. “We’ll see you in the streets if it’s not taken care of.”

Eiding and Henry Nicholas, president of the National Union of Hospital and Health Care Employees, alluded to the possibility of a general city strike – asking members of all unions to walk off their jobs – if the cancellation is not rescinded by the courts. PFT members are prohibited by law from striking.

Their proclamations drew jubilant shouts from the crowd, which ranged from babies in strollers to senior citizens with canes. Police diverted traffic and described the crowd as angry but mostly orderly. No arrests were reported.

Officials from the Commonwealth Foundation, a conservative think tank critical of the teachers’ union, were the focus of much ire. The foundation stirred up controversy this week when it hired about a dozen workers to hand out anti-PFT fliers. It also launched PFTfails, a website that blasts the union as “pathetic for teachers” and “defending the status quo at failing, violent schools.”

Matthew Brouillette, chief executive of the foundation, gave interviews over the din of people shouting angry words in his ears.

“We’re here to stand up for the good teachers,” Brouillette said. “The PFT is really failing our good teachers and our kids.”

Simone’s mother, Robin, said: “It’s a disgrace what this school board has done to our teachers. We don’t buy into ‘our schools are failing.’ Our district is failing us. Harrisburg is failing us. The SRC is failing us.”

Ali Cogan, a speech therapist at Franklin School in Crescentville and Sullivan School in Wissinoming, dressed her golden retriever, Tobi, in a red PFT shirt and came to show her anger. Speech therapists are in demand, and she could work elsewhere for more money and less hassle, Cogan said.

“I feel like I should be giving back to Philly, but they’re making it so hard,” Cogan said.

Under the terms imposed by the SRC, union members will pay between 5 percent and 13 percent of their health-care plans. Previously they paid none. If a teacher is single and chooses the cheapest plan, he or she would pay $72 a month. Teachers with families who opt for a better plan would pay almost $700 a month.

That rankled Christine Moan, a teacher at Fitzpatrick School in the Northeast. Superintendent William R. Hite Jr. and his cabinet earn much more than she does, but pay 7 percent of the cost of their health insurance.

“I don’t have a problem with contributing to benefits, but I don’t think it’s fair that the higher-ups pay less,” said Moan, who has two children who attend district schools.

At the SRC meeting, Hite said, “We will gladly contribute to our benefits at the same level that the PFT contributes” – if the PFT comes to the negotiating table and works out a deal that would save the district $54 million annually.

State Sen. Christine Tartaglione (D., Phila.) called the SRC’s move “a disgrace” and said she would act accordingly when the legislature reconvenes. “When we go back in January, my first piece of legislation is going to be to abolish the SRC,” Tartaglione said.

The commission meeting was disrupted frequently by protesters shouting, “SRC is not for me,” and “You don’t give a damn about our kids.”

Some speakers supportive of the SRC’s action were drowned out by jeers.

Helen Cunningham, a former school board member, told the SRC that she remembers “how unpopular doing the right thing can be.”

In 2000, the school board “did not have the gumption” to bring PFT benefits in line, she said.

“I realize you are only safeguarding the children in your care,” Cunningham said as protesters grew louder. She walked away without finishing.

Mark Gleason, director of the controversial Philadelphia Schools Partnership, barely got a sentence in before the audience shouted him down.

Those who spoke against the SRC and its cancellation were applauded roundly.

Dan Symonds, a first-year teacher at Munoz-Marin School in North Philadelphia, decried the “drumbeat of negativity” about city schools and their teachers.

“You’re telling us as educators that we failed a swimming test, but it’s clear to me that you took the water out of the pool,” he said.

City resident Samuel Jones turned away from the SRC. He said he would not dignify its members by showing them his face. “This board is illegitimate,” he said.

After speakers concluded, the SRC voted on its agenda very quickly.

The commission voted to begin the closure process for Arise Academy, a charter school for children in foster care that has struggled since it opened.

Roberta Trombetta, Arise CEO, noted that the school serves some of the system’s toughest children. “Most of our kids have been asked to leave your schools,” Trombetta said. “We have a place where kids want to come to.”