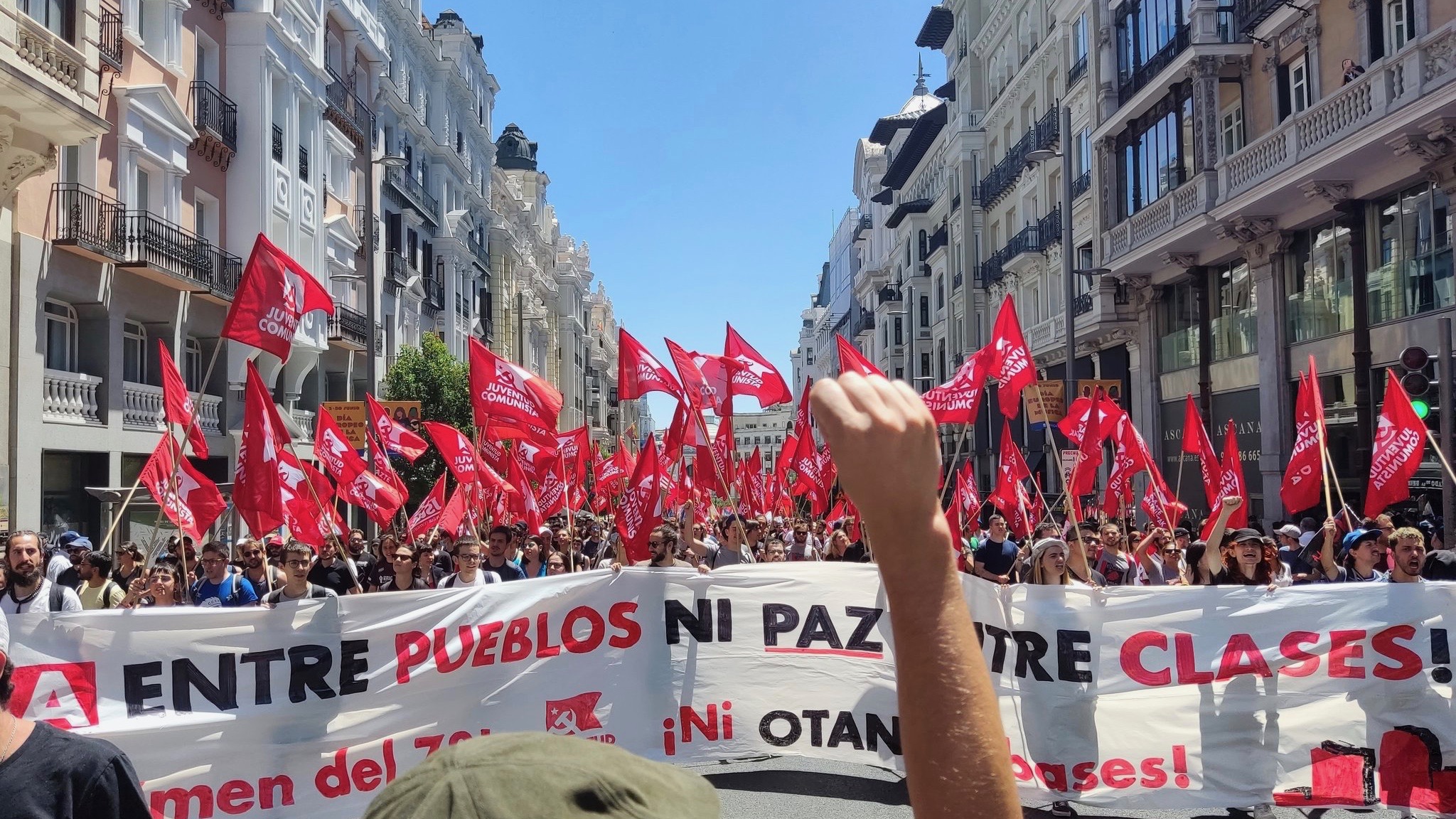 Thousands Take To Streets Against Upcoming NATO Summit In Madrid

Protesters claimed that NATO was responsible for various wars, from Yugoslavia to Libya, and is pushing for an arms race across the globe.

They demanded that NATO be disbanded to ensure peace and stability in the world.

Thousands of people took to the streets of Madrid, Spain, on Sunday, June 26, in opposition to the upcoming summit of the North Atlantic Treaty Organization (NATO) in the city. Protesters called NATO a threat to global peace and demanded its dissolution.

The organizers stated that close to 30,000 people participated in the protest, holding banners and posters with slogans such as “No to NATO, Not to War, For Peace”. They also raised slogans against US military bases in Spain and asked for their removal.

The protest was organized by a set of groups including the Communist Youth, the youth wing of the Communist Party of Spain, as well as Platform for Peace, World Federation of Democratic Youth, and others.

The organizers also held a two-day peace summit in Madrid on June 24-25, at the conclusion of which, a joint declaration was issued asserting that “NATO is a serious threat to world peace, having left a trail of destruction from Yugoslavia to Afghanistan.”

The joint declaration demanded the “dissolution of NATO,” claiming that it violates the UN charter and is intensifying a “new cold war against China and Russia.” It also underlined the fact that NATO is acting against “progressive governments throughout the global south” and encouraging a global arms race, which “goes against the real needs of people: education, health, housing, social security and an effective energy policy.”

NATO, whose agenda is dominated by the US, has a combined military budget of over USD 1 trillion and accounts for over  57% of the world’s total military expenditure. The grouping has recently tried to encourage all its members to spend at least 2% of their GDP on defense as accepted in its summit meeting in 2014.

One of the protesters, Concha Hoyos, said, “I am fed up with this business of arms and killing people. The solution they propose is more arms and wars and we always pay for it. So, no NATO, no army bases, let the Americans go and leave us alone without wars and weapons,”Al-Mayadeen reported.

Similar protests were held in different cities across Europe, including in London recently, where thousands took part. More such protests are scheduled globally in the coming days.

Fearing further protests against the NATO summit in the country, the Spanish government has issued a blanket ban on all protests until Wednesday citing security reasons.

The NATO summit is scheduled for two days, June 29-30, in Madrid. Apart from its organizational issues, the 30-member transatlantic military alliance will also focus on the war in Ukraine and the membership bid of two new countries, Finland and Sweden. Speaking to the press on June 22, NATO Secretary General Jens Stoltenberg claimed that strengthening the alliance is the priority in the face of growing danger from Russia and China.

The summit will be attended by Ukrainian president Vlodomyr Zelensky, who has been demanding that NATO play a more active role in his country’s defense against the ongoing Russian attack. His bid is strongly backed by US President Joe Biden and others, despite the fact that Ukraine is not a NATO member. The US has already pledged billions of dollars of weapon supplies to Ukraine.

Russia has said that NATO’s support to Ukraine proves its claim that the West and NATO are using the country in a proxy war against it. Russia started its military operation inside Ukraine in February after the US and NATO refused to discuss its security concerns vis-a-vis Ukrainian membership to the group and proposals of heavy weapons deployment.

Apart from Russia-Ukraine, NATO members are also going to discuss the membership bid of two Scandinavian countries, Sweden and Finland, who dumped their decades-old neutrality recently. Their bid for membership is opposed by Turkey, which has accused these countries of supporting Kurdish groups that it alleges are involved in terrorist activities within its borders. Russia has termed their membership bid another provocation by the West.

Sweden and Finland’s membership in NATO would mean deployment of Western forces and weapons in these countries, which either share borders with Russia (Finland) or lie in close proximity.

Formed in 1949 as a collective security organization of pro-US countries in Europe during the Cold War against the Soviet Union, NATO’s membership has increased from 12 to 30. It has added 14 new members since the end of the Cold War. NATO’s eastward expansion in Europe has been a contentious issue that has faced active Russian opposition.

Activists have accused NATO of extending its mandate by actively getting involved in wars in Yugoslavia, Afghanistan, Libya, and other countries to pursue the imperialist interests of the US and its allies. It has also been a partner in the US-led war in Iraq.