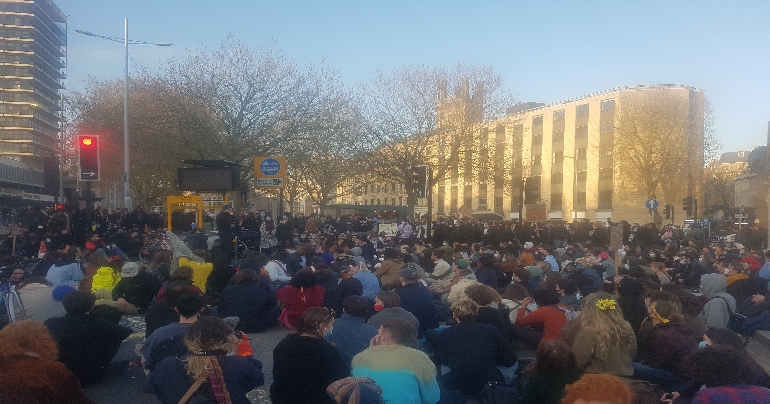 Thousands Take To The Streets Saying ‘Kill The Bill’

Thousands took part in a weekend of action against the Police, Crime, Sentencing and Courts Bill. The size and passion of the demos shows that people are willing to fight to stop this bill, which the Conservative government tried to sneak through under the cover of the coronavirus (Covid-19) health crisis.

50 demonstrations were called across the UK.

The proposed Police Bill is arguably the biggest attack on our freedoms since the Public Order Acts of the ‘80s and ‘90s. The controversial bill passed its second reading in parliament during March. The bill will give the police unprecedented draconian powers to arrest protesters, and will criminalise trespass, effectively outlawing the livelihoods of the UK’s Gypsy, Roma and Traveller (GRT) communities.

According to a joint statement by Sisters Uncut and other organisations:

The Police, Crime, Sentencing and Courts Bill will enable the police to decide where, when and how citizens are allowed to travel, congregate, protest, and work. Sentences of up to 10 years are laid down for anything from a protest to a house party or even just a lone individual causing ‘serious annoyance’. This bill attacks all communities, and it is all of us that must resist.

The Canary has tried to compile reports from just a few of the demonstrations that took place this weekend.

I was on the streets of Bristol, where people were holding their fifth protest against the Police Bill in just two weeks. For the last fortnight, Bristolians have been up against an army of riot police. They’ve attacked protesters on several occasions since police violence against a demonstration on 21 March triggered an anti-police riot. I have seen police dogs, horses, helicopters and drones deployed. And police officers have attacked us with batons, riot shields, and pepper spray. Despite this people have fought back undaunted, and returned to the streets again and again.

After marching from Bristol’s College Green at 4pm and through central Bristol, a thousand or so marchers occupied a road intersection with a sound system. The road was closed with a huge banner proclaiming ‘This Bill Kills our Rights’.

As the evening set in, the marchers went on the move again. They first occupied the entrance to the M32 motorway before spending the next hour or so on the move reclaiming the streets of Bristol. On several occasions, the march passed Bridewell Police station. That’s the site of the 21 March battle between police and protesters which ended in three police vehicles being set alight.

In the early hours of the morning, riot police charged at a small group of remaining protesters. They threatened the protesters with dogs and arrested several. Police launched an unpiloted drone from Castle Park to monitor people as they retreated.

Riot police and dogs have now been brought in to disperse the remaining #killthebill demonstrators in #BristolProtest this evening, who now number around 30 people @EpigramPaper pic.twitter.com/RwXRaqy68S

Solidarity with Bristol from Cornwall

Hundreds of people also demonstrated in Truro. A spokesperson for Kill the Bill Cornwall told The Canary:

It was amazing seeing so many people take to the streets to kill the bill in Cornwall for the third week in a row.

There has been commentary comparing the peaceful protests in Cornwall with those in Bristol. We reject these comparisons when used to condemn protesters. The only difference in Cornwall is that there were only a handful of cops present. If we’d been met with riot cops beating us and our friends with batons and shields, the scenes in Cornwall would have looked very different. Another protest and it could have looked different. Devon and Cornwall police are just as capable of that level of force and indeed were on the streets of Bristol as our friends were beaten.

“It is the police who are the problem”

The statement from Kill the Bill Cornwall continues:

It is the police who are the problem. Not protesters. The police abuse the powers they’ve already got. The last thing they need is more power. Cornwall stands in solidarity with all those who are talking action against this racist and draconian bill.

Stop and search in Plymouth highlights police racism against Travellers

If you needed any more illustration of why giving the police even more powers is a bad thing, look no further than this incident in Plymouth. It shows clearly how the new powers that the bill will give police to criminalise Travellers will lead to increased racism. According to a tweet by Devon and Cornwall Police Monitoring Group, police stopped and searched a person at the Plymouth demonstration because they believed that the detained person “was a Traveller”:

Racist stop and search at #KillTheBill demonstration in Plymouth today. Targeted because police believed one of those detained was a Traveller

"The police refused to provide receipts for the search, demanding names and email addresses of the detainees"https://t.co/zK7cK6lwSg

The No Fixed Abode Travellers and Supporters (NFATS) website explains how the bill’s proposed criminalisation of trespass will affect their community:

Criminalising Trespass is not solving problems, it is only breeding more problems

The NFATS statement goes on

It is a fact that our absolute right as human beings to travel nomadically is being questioned and this is not ok! No one should be questioned, controlled, arrested or have their homes seized for choosing a nomadic lifestyle

Thousands were out in London too. Counterfire magazine tweeted:

People clashed with riot police around Westminster in central London. 26 demonstrators were arrested. One journalist tweeted:

i saw at least three ppl pepper sprayed. there were ppl on their hands and knees being manhandled +hit by riot police. ppl pushed to the ground with force that threw them through the air. leading with police injury, after everything that's happened in previous demos is scandalous https://t.co/K811TQHCwy

Protesters have also reported violent policing at the Kill the Bill protest in Manchester, where at least 18 arrests took place. People are alleged to have blocked tram lines.

One person tweeted this footage of an apparent arrest:

Meanwhile in Brighton, a large crowd converged outside the police station. One participant tweeted video footage:

We need a national movement rooted in local resistance

One thing’s for sure, the police violence on the streets of cities around the UK shows how important it is that we continue to struggle against the Police Bill. If we’re going to be successful, we need to build a movement as big and as radical as the Poll Tax campaign of the 1980s. A national movement that is deeply rooted in the resistance of local communities across the UK. The beginnings of that movement can be seen in the organising that has taken place over the last few weeks. But we have a lot more work to do, and everything to fight for.

Tom Anderson is part of the Shoal Collective, a cooperative producing writing for social justice and a world beyond capitalism.