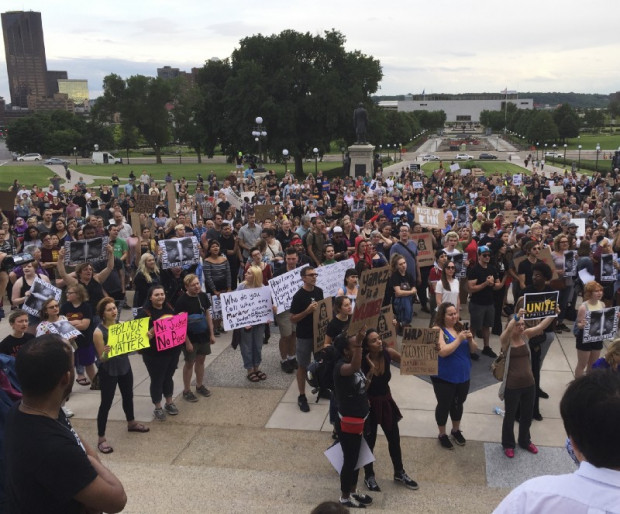 Thousands Take To The Streets To Protest Philando Castile Verdict

The officer who fatally shot Castile during a traffic stop last summer was acquitted.

Anyone could see the aftermath, and millions did: When Philando Castile was shot and killed by a Minnesota police officer during what started as a traffic stop on July 6, 2016, his girlfriend, Diamond Reynolds, whipped out her phone to live stream what came next. Reynolds’ four-year-old daughter was also in the car. She shared the video — graphic, bloody, and tragic — on Facebook, and it quickly went viral.

The officer, Jeronimo Yanez, was charged with second-degree manslaughter and endangering safety by discharging a firearm in the shooting. Yanez’s case is “believed to be the first time in Minnesota history that an officer was charged in an on-duty fatal shooting,” as the New York Times reports. But a charge is not a conviction, and those grieving Castille’s death would be waiting almost a year to find out if Yanez would actually be found guilty for the killing.

Yanez claimed that he feared for his life — that he believed Castile was, in that moment, reaching for his gun — while Reynolds maintains Castile was only taking out his I.D. Castile, a 32-year-old cafeteria supervisor, had a permit for the gun and alerted Yanez to the fact that he had a firearm on his person.

At the time, Minnesota Governor Mark Dayton asked what so many who saw Reynolds’ video were thinking: “Would this have happened if the driver were white, if the passengers were white? I don’t think it would have… I think all of us in Minnesota are forced to confront that this kind of racism exists.”

Castile’s death last July sparked massive protests in Minnesota and across the country. On Friday, Yanez’s acquittal did the same.

A jury reached its verdict after five days of deliberations: Yanez was acquitted of all charges. Castile’s mother, who attended court that day with her family, stood outside the courthouse and said to the assembled crowd, “My son loved this city, and this city killed my son. And a murderer gets away. Are you kidding me right now?”

Philando Castile’s sister, Allysza, cried as she told reporters, “He didn’t deserve to die the way he did. I will never have faith in the system.”

Within hours of the verdict, thousands of protestors came together at the state Capitol, starting a march toward St. Paul Cathedral. The crowd, as the Associated Press reported, was “mixed-race” and “includ[ed] many people with children.” Their signs read “Unite for Philando” and “Corrupt systems only corrupt.”

A group of protestors peeled off from the pack and headed to Interstate 94 in St. Paul; the freeway was shutdown in both directions. A police standoff with protestors lasted over an hour and a half, at which point “the group dwindled and appeared to largely clear the interstate without police using force.”

According to CNN, Minnesota State Patrol reported 18 arrests following I-94 demonstrations when protestors did not comply with orders to disperse. St. Paul police put the number of peaceful protestors in the streets and at the Capitol at about 2,000. “Speakers led chants, sang hymns and urged the protesters not to lose hope. Some held signs that read ‘this hurts’ and ‘Justice not served for Philando.’”

The roadside memorial at the site of Castile’s death saw an influx of visitors, flowers, and signs.

Castile worked at J.J. Hill Montessori Magnet School in St Paul. He served 500 children each day. He knew all of their names by heart.