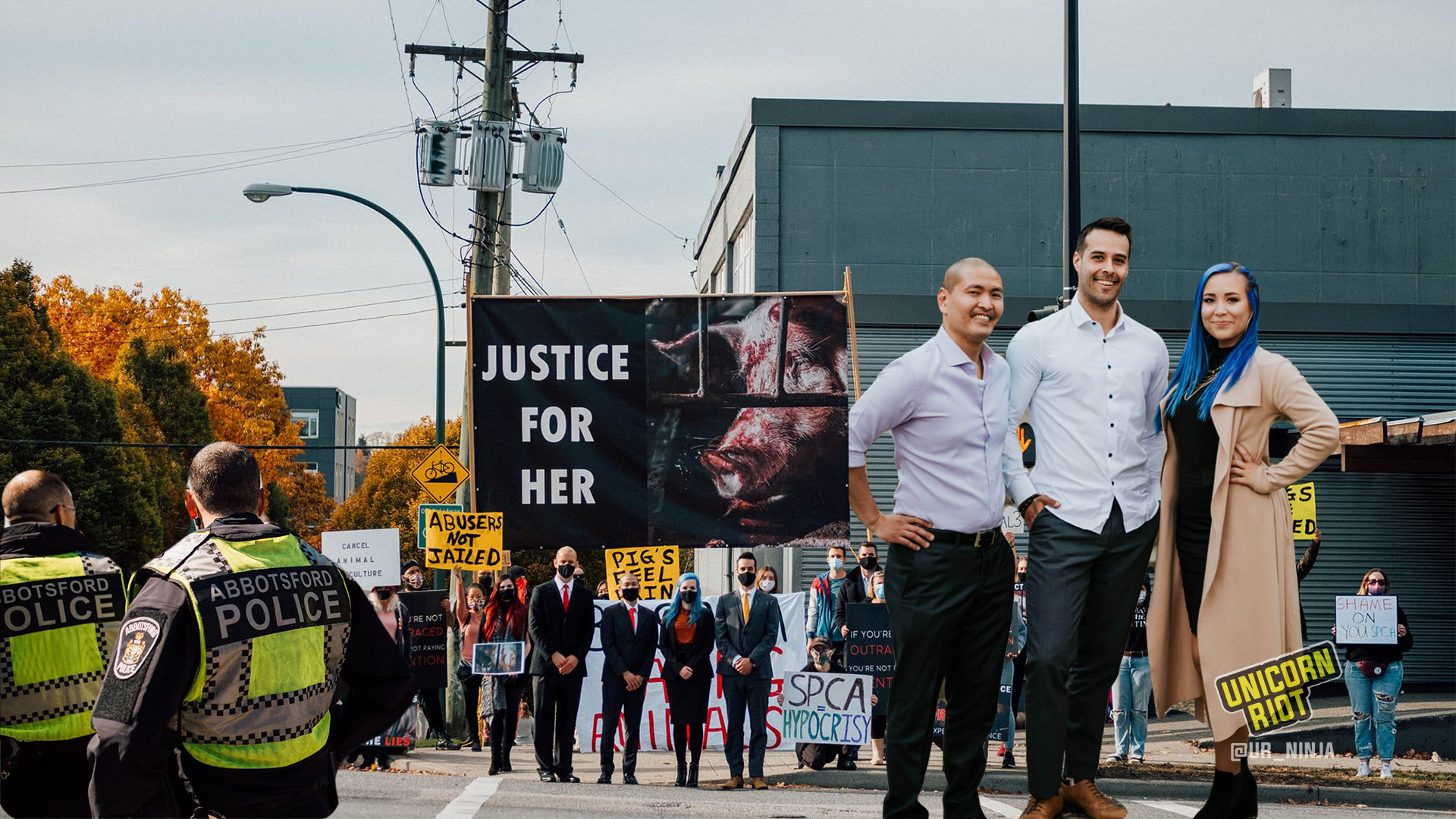 Abbotsford, B.C., Canada – It’s been three years since two hundred animal rights advocates descended on the Excelsior Hog Farm on April 28, 2019 “to expose the reality of what is happening to the victims of the ‘meat’ industry and to challenge the current mindset within our society,” according to the activist group Meat The Victims. Over a year later, a total of four activists were facing multiple charges, however today, three of them stand trial at the end of June 2022.

During the farm action, approximately 50 of the activists got inside the building where they witnessed deceased pigs in a dumpster, pigs laying on the ground unable to get up because of injuries, and “row upon row of pregnant pigs crammed inside metal crates the size of their own bodies, unable to even turn around or move for months on end.”

The seven-hour occupation ended with an agreement that the activists would leave if some of their demands were met—mainstream media getting authorization to enter the farm and take footage and veterinarians checking on the welfare of the animals.

Before the police allowed them to walk free, they recorded everyone’s identifying information, and ultimately decided to bring one person to jail—Amy Soranno.

Then police dove into a massive months-long investigation of the Excelsior occupation, which included reviewing a police report from a month prior when an Excelsior worker found two hidden cameras at the farm. On March 22, 2019, Constable Taylor “seized a bag of SD cards from the PR of Excelsior Hog Farm” and handed it over to Operational Support Officer (OSO) Wilding back at the police department headquarters. The following day, a sergeant asked Constable Taylor to review the footage on the SD cards, however when she went to the property lockers, they were not there and could not be located.

A few days before the Excelsior occupation, People for the Ethical Treatment of Animals (PETA) released an anonymously contributed video on April 24, 2019, from inside the hog farm, and filed an animal cruelty report against Excelsior with the British Columbia Society for the Prevention of Cruelty to Animals (BCSPCA). The video showed pigs with “volleyball-size hernias” and deceased pigs and piglets.

The BCSPCA announced on May 29, 2019, that they couldn’t recommend animal cruelty charges because the individual or individuals responsible for the video hadn’t come forward.

On July 10, 2019, Geoff Regier came forward after the BCSPCA promised his identity would be kept private. However soon after, they turned him over to the police. Along with Regier, Nick Schafer and Roy Sasano were also charged from what was allegedly discovered during the police investigation.

During the pretrial hearings in March and April 2022, the defense stated their intention to expose misconduct by the Abbotsford Police Department including the disappearance of the SD cards, and to expose the BCSPCA for improperly turning Regier over to the police. Without any official explanation, the Crown Counsel decided to drop the charges against Regier.

Now three of the ‘Excelsior 4’ are set to begin their four-week jury trial on June 27, 2022, facing a combined total of 18 indictable charges of Break and Enter and Criminal Mischief. Amy Soranno and Nick Schafer each face a maximum of 70 years in prison, and Roy Sasano faces a maximum of 40 years in prison. However if the court considers a barn as a “home,” then the maximum sentence would be life in prison.

“The fact that we still face prison time while Excelsior Hog Farm is free to continue its abusive practices is a mockery of justice. This case further illustrates the clear bias against animals and activists by the animal agriculture industry, BCSPCA, and police.“

Soranno continued: “Our trial will shine a light on the criminal animal abuse taking place at Excelsior, and the failure to hold them and other factory farms accountable.”

In addition to demanding that the hog farm be held accountable, the animal rights activists are calling on BC Agriculture Minister Lana Popham to replace the BCSPCA—which is a private charity and the sole animal abuse enforcement agency in BC—with a more effective government agency to enforce against animal cruelty in the province.