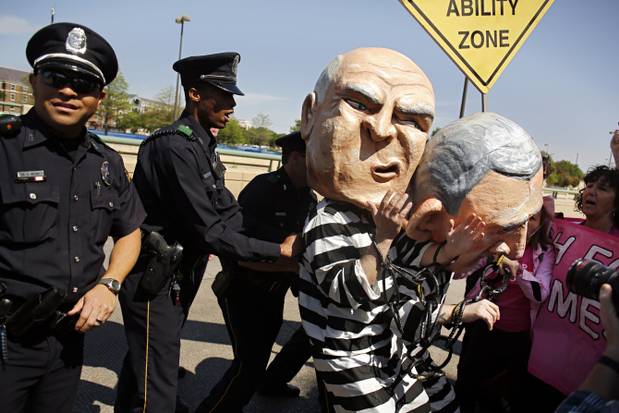 George W. Bush and Dick Cheney were arrested Thursday morning during a protest near the Southern Methodist University campus.

They were among about 200 people who gathered Thursday morning as a counterpoint to the dedication of the George W. Bush Presidential Center.

While five former U.S. presidents, other dignitaries and guests celebrated the Bush library and legacy, a week of “People’s Response” protests continued, focusing on war, continued U.S. aggression and the Bush presidency.

As police officers watched from behind barricades, the war opponents assembled on a grassy lot near SMU Boulevard, across the highway from the library.

“The building is just brick and glass,” said 62-year-old Coleman Smith of Ashville, N.C., wearing an orange jumpsuit representing Guantanamo Bay prisoners. “But what it represents is not just the end of the Bush era. It will forever after be a propaganda and research center for cultural and economic suicidal policies.”

Chants erupted: Stop the War Feed the Poor. People wearing black clothes and white masks stood at attention along the sidewalk. Names and death dates of war victims were handwritten on pieces of cardboard around their necks.

Others held signs: Does America Have a Conscience? Deconstruct the Lies. Arrest Bush. Library or Lie-bury?

Coleen Rowley, a former FBI agent and whistleblower, tried to engage people walking toward the Bush library. “Close Guantanamo,” she said handing a card toward another no-taker.

Speakers included longtime Bush foe Cindy Sheehan, whose son was killed in Iraq in 2004. She detoured from a cross-country bicycle tour for peace to attend the Thursday event.

A police officer told march leaders they could cross the Mockingbird bridge over Central toward the SMU campus. But officers near the bridge denied the marchers access, halting the procession and angering some protesters.

“I’m sure that’s why my son died,” Sheehan yelled. “So I could stand on the sidewalk.”

Minutes later a street scuffle broke out, and the three protesters were removed.

As more than a dozen officers stood in the street, some remaining protesters jeered as well-dressed attendees leaving the ceremony passed. “Shame on the collaborators!” one man screamed.

The atmosphere lightened after police drove the arrested men away and ceremony attendees stopped trickling past.

The sole counter-protester was Wayne, a Rotweiller with a “Bush is Awesome” sign hung around his neck.. The dog’s owner, Justin Fitzpatrick, walked Wayne straight through the crowd, one protester stopped him to argue. A second asked to pet the dog.