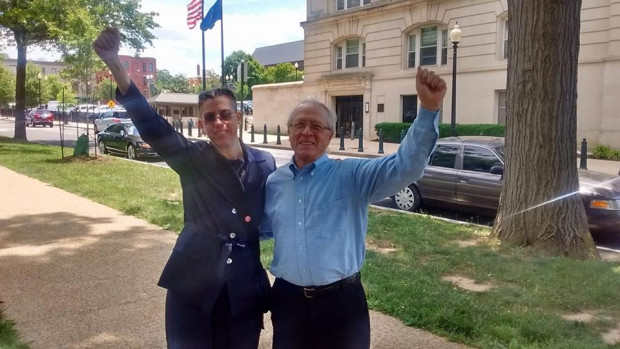 Above: Jess Rechtschaffer and Sid Madison have been released from incarceration. They were two of the three who interrupted confirmation hearings that were being fast-tracked by the senate for new FERC commissioners. From BXE.

WASHINGTON, DC: The week following Trump’s announcement that he will pull the United States out of the Paris Climate Accord, three individuals representing a coalition of nearly 170 groups opposing Trump’s nominees to the Federal Energy Regulatory Commission (FERC) disrupted a committee vote to advance the candidates. Three individuals were arrested during the committee vote.  They stood up and spoke out about FERC’s abusive practices and disregard for the environment.

The coalition, made up of local and national groups focused on various issues, is demanding that senators vote no on Trump’s nominations until the Senate holds investigations into FERC’s the abuses of power and law. The campaign has been building for more than five months and has included call-in’s, letter-writing drives, Twitter storms, lobby days, and civil resistance focused on educating senators and pressuring them to oppose the nominations. The coalition has extensive documentation of FERC’s abuses of power and law to back up their demands.

So far, the Senate has showed an unwillingness to protect the public from pollution, climate change, and eminent domain seizures of land that result from FERC’s mandate to rubber stamp fracked-gas infrastructure. Now that Trump is pulling the United States out of the Paris Climate Accord, the coalition says it’s even more unacceptable for senators to approve Trump’s nominations, one of whom, Mitch McConnell energy staffer Neil Chatterjee, is a climate denier.

This disruption followed a similar one the coalition carried out two weeks ago when the Senate Committee on Energy and Natural Resources  met to question Trump’s nominees. The coalition has vowed to continue the fight to Resist FERC and the world and abusive, exploitative world it represents and perpetuates.

“As a New York City resident I am outraged by FERC,” said Jess Rechtschaffer, who was arrested this morning. ”It is criminal that that FERC approves wholesale land grabs so that the fossil fuel industry can install pipelines via eminent domain in the vicinity of the Indian Point Nuclear Power Plant.  FERC has never seen a dirty energy project they didn’t like from the Dakotas to NY.”

“Climate leaders don’t support fracking or fracking infrastructure buildout, and true conservatives don’t support eminent domain for corporate gain,” said Ted Glick, an organizer with Beyond Extreme Energy and another who was arrested for disrupting the committee vote. “Senators should vote no on both of Trump’s FERC nominees, big supporters of 20th century energy sources in the 17th year of the 21st century. We need a Federal Renewable Energy Agency, not a fossil fuel industry-controlled FERC.”