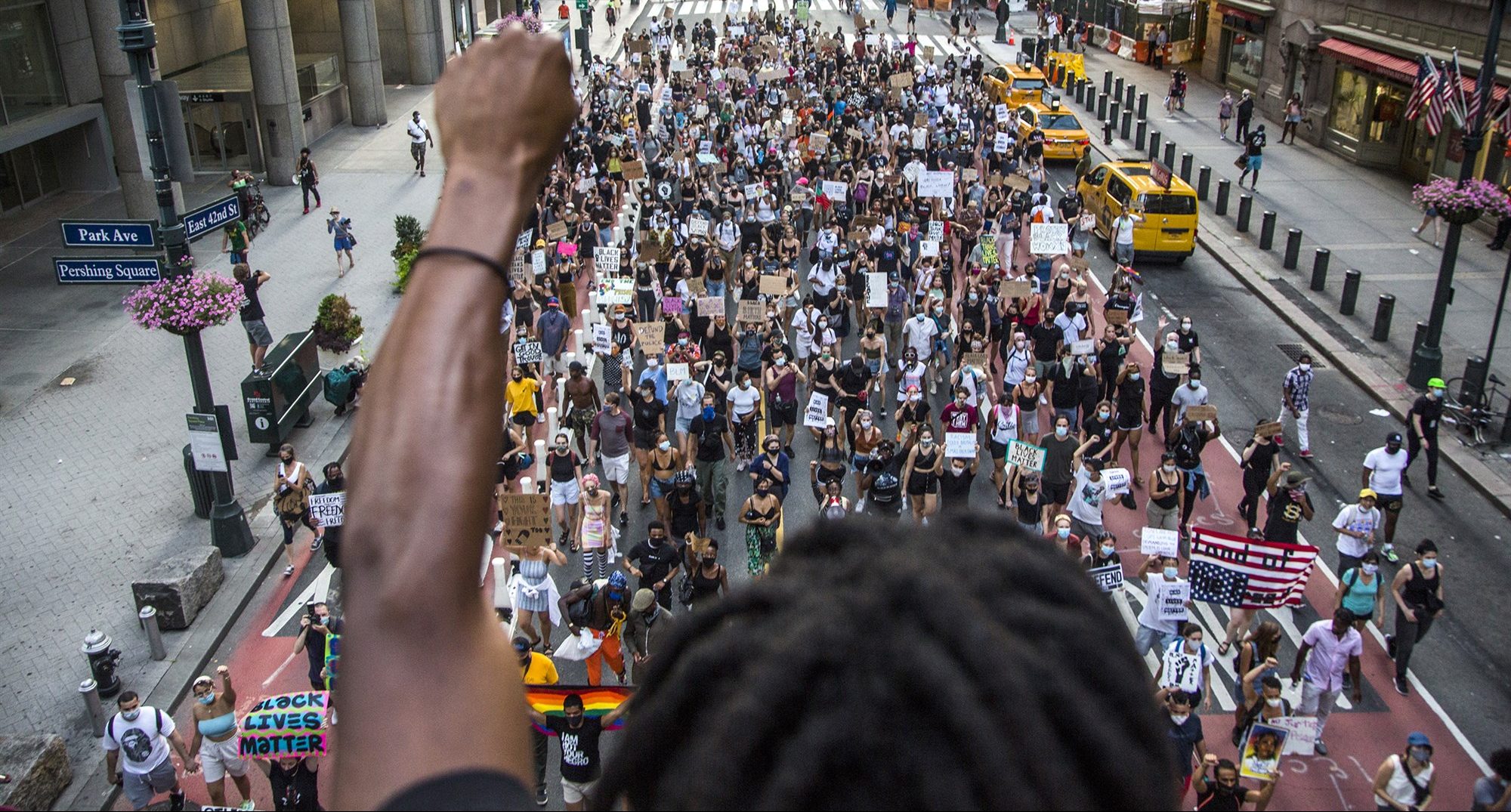 Three Cities Designated As ‘Anarchist Jurisdictions’ – What That Means

Above photo: A man raises his arm in support of the crowd of protesters marching in downtown New York on July 26. Pablo Monsalve / VIEWpress/Corbis via Getty Images file.

Everything old is new again.

A glance back at 1887 proves there is a very bloody precedent for what Trump’s White House is doing here.

On Sept. 21, 2020, millions of people in three major U.S. cities awoke to find themselves living in what President Donald Trump and his Justice Department cronies had declared “anarchist jurisdictions.” New York City, Portland, Oregon, and Seattle — all of which are led by Democrats — were slapped with the label and, as a result, are now at risk of being defunded by the federal government, even as they grapple with massive budget shortfalls tied to the coronavirus pandemic. The president is playing a political game with those whom he considers to be his enemies, and that list is growing day by day. Anarchists (and antifascists, or “antifa”) have become his favorite new bête noire.

This all came as quite a surprise to the people living in these “jurisdictions,” some of whose only exposure to anarchism has been a vague notion of “chaos” or “disorder” buoyed by hyperventilating Fox News headlines. For America’s living, breathing anarchists, the carnivalesque absurdity of the moment soon gave way to trepidation, and Martin Niemöller’s immortal poem springs to mind.

Trump’s favorite new narrative — that anarchists are behind everything bad happening in America — is effective because almost no one is willing to defend anarchism or to meaningfully engage in difficult conversations about racist policing and white supremacy. Now he is ramping up his efforts to equate any kind of mild dissent with insurrection, and by using anarchy as a convenient boogeyman (much as it has done with antifa), the Trump regime is further working to criminalize and stigmatize resistance.

Unfortunately, Democrats are doing little to stop this crusade, even indulging in their own anti-anarchist sentiments to pander to the “law and order” vote. Liberal Democrats have never been a friend to the left in general, and Democratic presidential nominee Joe Biden has condemned anarchists and called for their prosecution.

Democrats are arguably less fixated on the anarchist threat, but neither mainstream liberals nor the GOP really understand what anarchists really believe. Attorney General William Barr certainly has no idea. Far from the scary, senselessly violent mobs popularized by conspiracy theorists and Republicans alike, anarchism is a complex and legitimate leftist political ideology that is deeply rooted in broader working-class movements — from workers’ rights to prison abolition to LGBTQ+ liberation — and challenges the legitimacy of the state. But politicians on both sides of the aisle insist on flattening it to “angry people setting things on fire” because it suits their political agenda. Engaging with actual anarchist ideas, like dismantling oppressive institutions, forming mutual aid networks and building a world without hierarchy, is far too dangerous for those whose comfort and power depends on upholding the status quo.

While its midcentury efforts to crush communism and derail Black liberation movements through violent surveillance operations like COINTELPRO and the Palmer Raids are now common knowledge, the U.S. government has also been waging war on anarchism for well over a century. In the early 1900s, anarchists — many of them Jewish immigrants from Eastern Europe — were targeted, imprisoned and deported for their beliefs, which the ruling class accurately identified as a threat to their power. Others, like Italian anarchists Bartolomeo Vanzetti and Nicola Sacco, were wrongfully convicted and executed. The Weather Underground in the 1970s and the WTO protests in the 1990s threw anarchists back into the limelight — and into the FBI’s crosshairs. During Trump’s 2017 inauguration, black-clad protesters were rounded up en masse and threatened with shockingly draconian charges that took years to fight off. Everything old is new again, and as a glance back at the 1887 executions of the Haymarket Martyrs shows, there is a very bloody precedent for what Trump is doing here.

So where did this latest gambit come from? The Justice Department’s reasoning behind deeming these cities bastions of lawlessness hinges upon their city councils’ allegedly “anarchist” actions following the uprising against police brutality that swept the nation in the wake of the killing of George Floyd.

But what actually happened here? Did Seattle’s political leadership resign en masse and hand power over to a network of consensus-based neighborhood councils? Did Portland dissolve its prison system? Did New York City reallocate its budget to fund mutual aid projects and abolish its police department? Hardly. For all of Trump’s fearmongering about his hometown, Mayor Bill de Blasio’s NYPD-worshipping neoliberal vision of New York is any anarchist’s nightmare. And despite his college flirtations with the Sandinistas, the mayor is no fan of anarchists, either. Basic measures like cutting police budgets, dropping charges against some protesters and refusing Trump’s offers to send in federal troops are being painted as radical acts of rebellion, while in reality, they represent the barest minimum that city and local leaders can do to attempt to address the festering injustices being forced upon the most vulnerable.

Abolishing the police and freeing all political protesters would have been anarchist acts. What these liberal cities have actually done is offer the people a few scraps in hopes that they’ll lose interest and stop demanding real justice. It was the absolute least they could do, and yet a vindictive Trump is now attempting to punish these cities’ residents in retribution. Because while the wealthy political elite bloviate from their well-secured mansions, it will be the people who suffer from this political game: the progressives and liberals and socialists and anarchists and regular politically unaffiliated residents who took to the streets to protest the epidemic of state-sponsored Black death and to fight for Black lives.

All of those who protest Trump and his evil policies, whether or not they’ve ever heard of Emma Goldman or read Kuwasi Balagoon, are being lumped together as “anarchists” now, with the implication that anarchism is an inherently negative thing. Anarchists and their allies know the truth, but the ruling class is very much invested in convincing people of this fallacy, because if more people knew what anarchism actually means, they may realize that it makes a lot of sense. The last thing the U.S. government wants is for the people it rules over to realize that they’d be better off without it.

Kim Kelly is a freelance journalist, organizer and author based in Philadelphia. Her work on labor, politics and working-class resistance can be found in Teen Vogue, The Baffler, The New Republic, The Washington Post and many others.