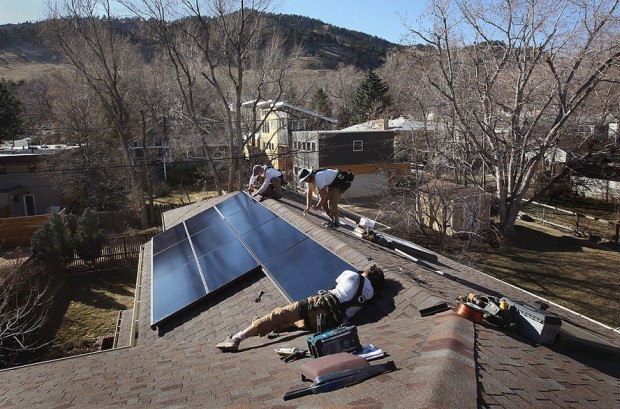 Above Photo: By John Moore/Getty Images

If you’re reading energy news of late, you might have come across three new ways that forces are aligning against local renewable energy. State governments are increasingly pre-empting local authority on a range of issues, including energy. Utility companies are undercutting state regulation with their legislative lobbyists. And utilities are also bringing their monopoly market power to bear in previously competitive markets.

We’ll detail examples of each of these three disturbing trends, and ways to fight back.

One of the most disturbing trends in politics is that of states preempting local authority.

Across many economic sectors, we at the Institute for Local Self-Reliance identify ways that cities can take charge of their local economy. In energy, that includes ideas like a city takeover (municipalization) of the utility, banning fracking, or increasing franchise fees charged to private, monopoly utilities for use of public property to deliver energy services.

Unfortunately, some state legislatures have decided to reduce local authority to make these moves. Through municipalization laws passed decades ago, states preempted or limited local authority to take over utilities, instead favoring state regulation and oversight. State lawmakers In Colorado in 2016 passed a law that overturns local bans on gas fracking. In 2017, the Minnesota legislature considered a bill that would add complexity when cities consider changes to franchise fees, despite ample public notice and deliberation required by cities that have such fees.

While there aren’t numerous examples of local energy policy preemption, we fear it may grow as states become more accustomed to preempting cities, or making it expensive for local governments to exercise authority. In Arizona, for example, differences of opinion in a variety of areas of regulation prompted the state government to threaten to withhold local government aid to cities that enact ordinances that conflict with the priorities of the legislature and governor.

States themselves are facing a preemption threat as well, with U.S. Energy Secretary Perry suggesting he may find ways to favor large-scale fossil fuel power plants over renewable energy producers.

A second area of threat is utilities flexing their political power to avoid state regulation or boost their bottom lines. In Minnesota, for example, monopoly utility company Xcel Energy — and its nearly 50 lobbyists — successfully pushed through a bill in 2017 that removes Public Utilities Commission oversight of a proposed gas power plant. The plant had not been prohibited, but commissioners had been skeptical of its cost-effectiveness (for good reason). The utility also bullied this local nonprofit for creating a parody video that accurately depicted the gulf between the utility’s public image and its efforts to build the gas plant.

Utilities have similarly flexed their muscle in statehouses across the country. In Missouri, monopoly utility Ameren, with 40 registered lobbyists at the state capitol, has stymied state efforts to reform the utility system.

In Michigan, monopoly utilities spent over half million dollars on lobbying in a year, and nearly $1 million more on an advertising campaign to oppose deregulation and warn of energy shortfalls.

In Virginia, “no single company even comes close to Dominion in terms of its wide-ranging influence and impact on Virginia politics and government,” Larry Sabato, a University of Virginia professor and political analyst, told the Richmond Times-Dispatch earlier this year. Several candidates in the gubernatorial race are discussing rolling back a 2015 law that allows the utility to keep excess profits instead of returning them to customers. Dominion executives are contributing heavily to the candidates that oppose such a rollback.

In Florida, the four biggest monopoly investor-owned utilities collectively had one lobbyist for every two legislators, and spent more than $12 million in lobbying from 2007-14 — along with $18 million in campaign contributions. They dropped over $20 million in lobbying in 2015-16 alone, amid a push to pass a constitutional amendment that would have limited rooftop solar in the Sunshine State.

In North Carolina, Duke Energy is threatening to go to the legislature for changes to solar purchasing rules rather than wait for a conclusion to a regulatory process underway at the Public Utilities Commission.

Influence can be localized, as well. In San Diego, where public officials are considering a city takeover of electricity purchasing from the utilities, incumbent monopoly San Diego Gas & Electric has a lot of influence. The utility “donates to and lobbies San Diego’s elected officials and has a strong voice at the Chamber of Commerce. So as the city decides whether to implement community choice, political leaders could take sides,” according to an NPR story.

Utility companies ostensibly settled for public regulation as a condition of receiving a government-supported monopoly, but in many cases that public oversight is obscured by the utility’s influence over its supposed overseers. As the City Pages article about Xcel Energy’s bullying behavior in Minnesota noted:

“Minnesota should take cues from the meddling ad Xcel’s lawyers so disliked, and introduce a dose of honesty. Stop calling Xcel a “regulated monopoly.” That first word just became obsolete.”

In most markets, utilities also wield a disproportionate amount of power over their potential competition. A recent report on distributed solar in the Washington D.C. explains many of those powers:

In some cases, utilities wield this power to threaten market share of existing players. Two solar pilot programs in Arizona in 2015 were among the first to offer a utility-owned distributed solar program, which enabled customers to receive solar on their rooftop with a much lower upfront cost (and much less lucrative long-term return). With fair rules for competition (such as requiring utility-owned projects to be provided by subsidiaries rather than the incumbent monopoly company, and preventing utilities from exclusively advertising their own product in customer bill inserts), this might be fine. But in the case of both Arizona utilities, the utility offerings are a complement to lobbying efforts to reduce the value of distributed solar, for example by cutting net metering.

The efforts to reduce competition aren’t limited to investor-owned monopolies. The municipal utility serving San Antonio began offering a “roofless solar” subscription and a solar roof rental program over the last two years. The rental program is nearing 5 megawatts of installed capacity, and was pitched as a way to reduce the supposed “cost shift” in benefits from non-solar owners to solar owners. (In fact, there’s plenty of evidence that the cost shift is largely a utility-sponsored myth at today’s level of solar capacity.)

Other utility-sponsored efforts to enter the distributed generation market include a power provider in New Jersey and proposals to allow California investor-owned utilities to get in the game.

Of course, interest from utilities in this market may not translate to solar installations. A foray into distributed solar by investor-owned monopoly Georgia Power has netted just five installations out of over 10,000 inquiries.

How To Reclaim Local Power

Fortunately, there are ways to fight back against these pressures and reclaim local power. To battle preemption, the solution has been forming alliances of cities. While cities may not all agree with one another on policy issues from wages to sick leave to energy, they tend to be in agreement that they don’t want a state power grab. Pressure from the League of Minnesota Cities helped undercut legislative preemption proposals, and such pressure has worked in other states as well. In addition, cities sometimes adapt their strategies to work around preemption. When the state of Minnesota preempted a plastic bag ban in Minneapolis, the city announced it would look for alternatives to the ban that could still reduce plastic bag use.

Utility political power can also be reduced. Terrific research from the Energy and Policy Institute has uncovered how utilities use ratepayer funds for their membership in trade organizations that often oppose their customers’ interests. This revelation has led some state regulatory commissions to disallow the practice (in full or in part), by instead requiring utility shareholders to pay for such memberships that primarily benefit themselves. And even when utilities continue to swing a heavy bat, they may lose, as did Florida Power & Light in its attempt to amend the Florida Constitution in order to fortify its monopoly.

Utility market power is a legacy of 100 years of monopoly control, but it’s weakening, thanks to technological shifts. The advent of affordable solar plus storage may not let utility customers “cut the cord,” but it will give them crucial leverage to demand fair treatment in the distributed energy marketplace. Already, states like New York are exploring ways to transform the grid into a platform for transacting energy rather than a skewed monopoly playing field. Key rules include community shared renewable energy and net metering or fair value of solar, among others. Cities can help by setting up bulk purchase programs for customers to buy solar, energy storage, or make energy efficiency upgrades. They can also encourage adoption of inclusive energy financing to make energy savings more accessible.

There’s no question that there are threats to local power, but as the economic and technological transformation continues toward decentralization, communities will find they have more power at their disposal to fight back.