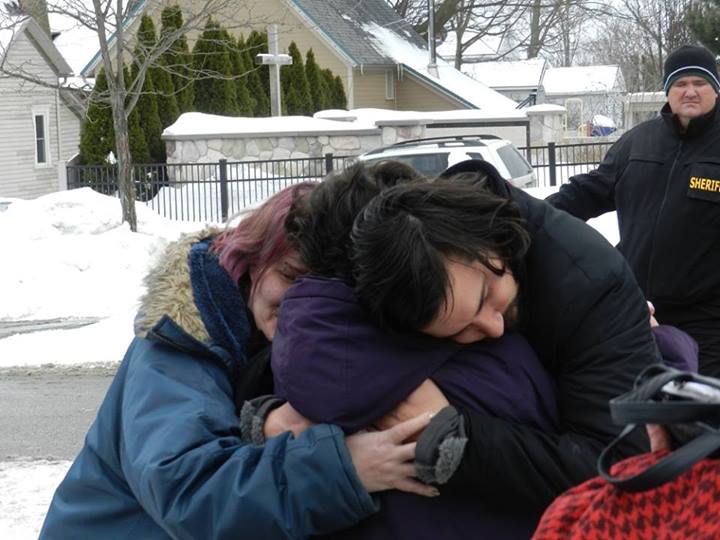 The trial of peaceful activists from Michigan Coalition Against Tar Sands (MI CATS) ended today with the jury finding Vicci Hamlin, Lisa Leggio, and Barb Carter guilty of both charges brought against them:  trespassing and resisting and obstructing an officer. Supporters are deeply saddened that after deliberation for over 10 hours the verdict returned as guilty of all counts. The jury was split most of this time, returning to the courtroom several times for clarification. Sentencing was scheduled for March 5th and the defendants’ bail was revoked and immediately taken into custody.

On January 15th when a denied motion to quash was heard by Judge Collette, he told the MI CATS that they would not be allowed to argue that their actions were “environmentally necessary”. Collette said, “If there is somebody leaking oil on a piece of property and you race out in the yard, and you go in and you stop it, and they charge you with trespassing, I’d throw that case out in a heartbeat. That’s what I think of as ‘Environmental Necessity.” The judge obviously does not understand the severity of the looming climate crisis and that unjust laws allow for the destruction of communities and public health so corporations like Enbridge can maximize their profit. Moreover, the outcome of the case was especially discerning since Judge Collette previously stated that he wanted to make an example out of the three protesters.

This action in which Lisa, Barb, and Vicci were a part of, was not only aimed at stopping the expansion of a Enbridge tar sands pipeline before the next disaster, it was also to stand in solidarity with First Nations land being turned into a sacrifice zones to mine tar sands. They used their positions of relative privilege to support communities currently being poisoned in Detroit and others because of extraction industries that put profit before people. Their actions were nothing less than necessary.

Vicci Hamlin, who became a great grandmother Monday, expressed how for her and Lisa as parents, this is a necessity, stating “ The threat that tar sands extraction poses to my children, grandchildren and now great grandchild requires me to act”.  Lisa Leggio,  will be a grandmother next week  said, “ I came to Michigan from New York, and fell in love with nature and the water. Seeing up-close the devastation that the 2010 tar sands spill caused to  the Kalamazoo river and surrounding community, I think about my daughter and her unborn child. What are we leaving them? I did this for them, and we did this for everyone’s children”.

Prosecuting attorney Danielle Dixon and Judge Collette forbad the defense to mention many of the reasons why defendants were taking this action. Such as, the 2010 Kalamazoo oil spill, the largest on-land oil spill in US history that still is needing cleanup, past its deadline. On Thursday, Barb Carter was silenced by Judge William Collette for mentioning that she lived 3 miles away from the Marathon Tar Sands refinery which affects her ability to breath when entering or leaving her home. The judge also personally questioned her after both prosecution and defense questioned her.

The MI CATS has vowed to continue peaceful resistance despite the sentence imposed.  As long as Enbridge is attempting to pump toxic tar sands into refineries, principally located in communities of color, MI CATS will be standing alongside anyone who wishes to stop them. The charges used have historically been used to disrupt communities and incarcerate mainly people of color and the poor in Michigan. The fight to challenge Michigan’s Resisting and Obstructing statute is going to continue with the MI CATS appeal.

Your support, love, and commitment to this movement of movements means the world to us.

Post by Stop the Machine! Create a New World.