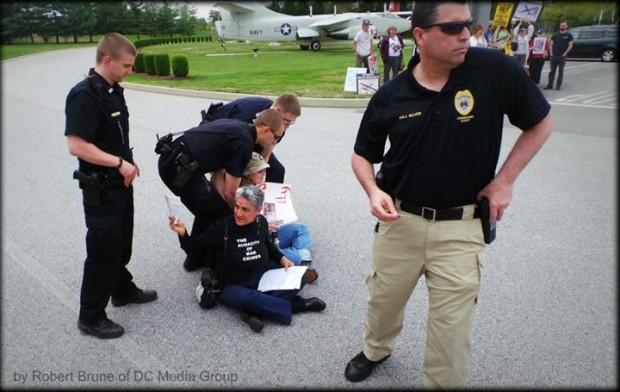 Above: Manijeh Saba and Ellen Barfield being arrested on May 3 as they attempt to enter the headquarters of the National Security Agency at Fort Meade, MD.  Photo by Robert Brone, DC Media Group.

A quick but comprehensive trial today in US District Court in Baltimore, MD, for 3 women who protested drone targeting at the National Security Agency at Ft Meade, MD, resulted in acquittal on one charge and conviction but low fines on the other two charges.
Allowed to speak rather freely, in less than 3 hours Marilyn Carlisle and Ellen Barfield of Baltimore, and Manijeh Saba of Somerset, NJ, and their activist colleague Malachy Kilbride of Camp Springs, MD, essentially put NSA surveillance for drone targeting on trial by showing photos, naming names and mourning children killed by drones, and asserted their First Amendment and Nuremberg justifications. As defendant Saba in the closing statement said, “Why would we, in a democracy, be expected to obey an order that violates exercise of our Constitutional rights and responsibilities?”
Refusing to comment on drones or the NSA, Magistrate Judge Timothy Sullivan exclaimed that it was “way beyond my pay grade” to make rulings on government policies. He did agree with the defendants that areas which are generally open to public access cannot become “protected property” when certain activities take place, and denied the “attempting to enter…”, essentially a trespass, charge. He convicted the women on failure to comply and disorderly conduct charges, but gave respectively $25 and $5 fines, which with fees for processing total $100, much less than the possible $1365 fines and fees the women had faced.
The testimony of potential witnesses Col. (Rtd) Ann Wright and CODE PINK leader Medea Benjamin, with expertise in the illegality and immorality of drones, was not surprisingly ruled inadmissible.
The courtroom was gratifyingly full of over a dozen supporters, who Judge Sullivan acknowledged as likely to join future NSA actions after he heard that Keep Space for Peace Week, a frequent time to demonstrate at the NSA to protest space weapons, is appropriately happening this week.