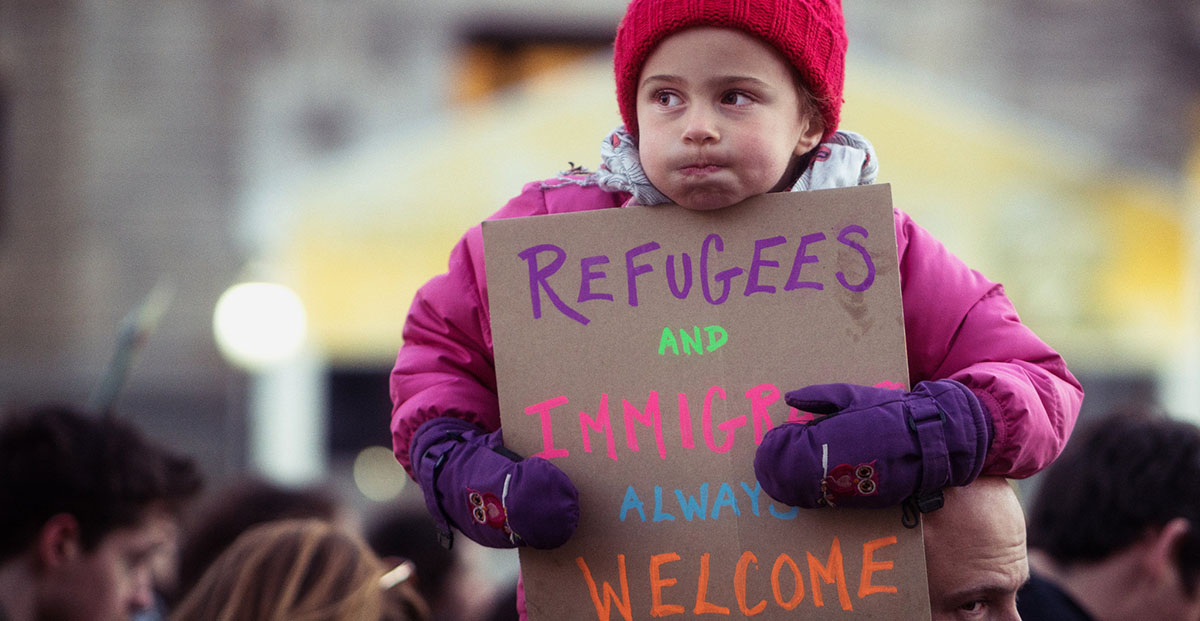 The U.S. Department of Homeland Security (DHS) recently published its final set of regulations on “public charge,” which amount to a racially-motivated wealth test on immigrant families and individuals pursuing a healthy, stable future in the U.S. DHS finalized this rule against widespread public opposition, having received 266,000 public comments on it, the overwhelming majority opposed to its implementation. If the new rule goes into effect, it would devastatingly impact millions and dramatically reshape our immigration system, adding new bricks to the “invisible wall” the Trump administration is building around the U.S. to exclude would-be immigrants who aren’t white or wealthy.

The intention behind the new public charge rule is to spread fear and chaos in immigrant communities — to make people afraid to benefit from programs they are legally entitled to access, programs intended to make them healthier and stronger. Already, rumors and confusion about the new 837-page rule are having a chilling effect on immigrants and their families, causing them to avoid using crucial basic-needs and health care programs.

But we can fight back against this campaign of fear and attacks on immigrant communities. We need to fight fear with facts.

“Public charge” or the “public charge test” is a longstanding policy used by immigration officials to decide whether a person may immigrate to the U.S. or be granted lawful permanent resident status. While policy experts are still analyzing the specifics of the final rule, the American people already recognize its cruel intentions. By altering the standards of the public charge test, the Trump administration is rigging the rules to make it much more difficult for people who aren’t white or wealthy to immigrate. Under the new rule, anyone whose income is less than 250 percent of the federal poverty level could be deemed by immigration officials likely to become a public charge, so families of four whose income is less than $64,000 a year need not apply.

The rule does not go into effect until October 15, 2019, however, and several lawsuits have already been filed seeking to halt its implementation, including one by NILC and partners. We are fighting back in the courts, in Congress, and in our communities to stop the rule, so stay tuned for new developments. In the meantime, here are three things you should know about public charge:

One: Trump’s public charge regulation is a race-based wealth test that creates prejudicial standards for people of color. Who among us has the power to predict someone’s future potential and accomplishments based on a simple snapshot of their life? The public charge test looks at factors such as age, health, income, and family status to gaze into a crystal ball to make a prediction about whether or not a person is likely to become a public charge in the future, but the test reads like the extreme and counterproductive immigration “reform” legislation that President Trump has been unable to get Congress to pass.

Under Trump’s new test, people who are elderly, have disabilities or problems with their health, come from countries where English isn’t spoken, or have relatively low incomes will be the most heavily impacted. The new rule’s “totality of circumstances” test is essentially legalizing a discriminatory narrative of who deserves to be American. If applied to U.S.-born citizens, at least half of today’s citizens would fail the test. And these prejudicial standards aren’t just aimed at immigrants; they’ve long existed in this country for all communities of color. The new rule is a codification of the classic double standard that if you aren’t born white or rich, you’ll always have to work twice as hard to be recognized — no matter where you come from.

Two: We’ve seen abuses like this before — both in our country’s history and from this presidential administration. The first mention of the term “public charge” in the U.S. was in relation to colonial “poor laws.” While these “poor laws” originally applied to everyone living in the colonies, New York and Massachusetts altered these laws in the mid nineteenth century to make it harder for Catholic Irish immigrants — who were fleeing the Great Famine in Ireland — to immigrate to those states. Similarly, a “public charge” rationale was used to prevent European Jews fleeing Nazi Germany and the Holocaust from seeking refuge on our shores. And now Trump is using a public charge rationale to rig our immigration system in favor of the white and wealthy.

Three: Confusion and fear are causing people to unnecessarily avoid using crucial programs that could help them. There is widespread confusion about who is directly affected by the new rule, and many people to whom the rule does not apply have already begun to avoid benefiting from crucial programs for which they’re eligible. The rule doesn’t go into effect until October 15, 2019, and any benefits used before that date will not be counted against people who use them. Most immigrants are ineligible for most federal benefit programs, like Medicaid and food stamps, until they’ve had permanent resident status and lived in the U.S. for at least five years — so most applicants for permanent residence haven’t received public benefits, because they’re not eligible to receive them. In addition, the receipt of benefits by an applicant’s children or family members is not counted against the applicant, unless the family members are also applying for permanent residence.

The rule will be applied only to applications submitted after October 15, 2019, so people who currently have permanent residence applications pending are also not subject to it. But, unfortunately, that isn’t the message immigrants are hearing, as millions of immigrants, their U.S. citizen children, and family members have become frightened that their families might be torn apart. So many are avoiding health, housing, and nutrition programs, even though the rule doesn’t apply to them. Community education to dispel false information will be crucial to counter this chilling effect.

MAKE NO MISTAKE, THIS NEW RULE IS AN ATTEMPT to push a divisive narrative that people of color, people with relatively low incomes, people with disabilities, LGBTQ communities, and immigrants are somehow less deserving of American opportunity. But this narrative is wrong. The best way to build a strong country is to ensure that the families who live here have the food, medical care, shelter, and other basics they need to thrive.

And this fight isn’t over. Public servants, advocates, and regular people all over the country will continue to stand up, speak out, and fight back to protect immigrant families and our country’s future. When America is at its best, we are a welcoming country.

To stay updated about the latest developments regarding the public charge rule and to get involved in the fight against the public charge attack on immigrant families, visit www.ProtectingImmigrantFamilies.org.