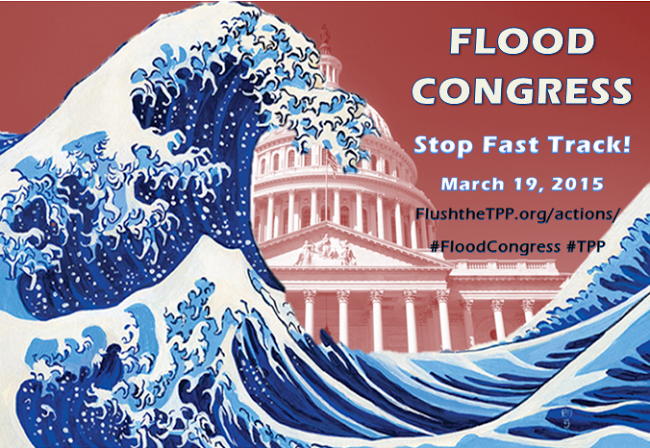 Where: Meet at the Union Station Food Court

Across the country people are rising up against corporate free trade deals like the Trans-Pacific Partnership (TPP) and the Trans-Atlantic Trade and Investment Partnerhsip (TTIP). Through continuous organizing and creative action we have shown that we have the power to stop the world’s largest corporations, to end their assault on our communities, workplaces, democracy, and environment. But we still have a big fight on our hands, the fight of a lifetime, and no one will lead this battle but us. Join us next week as we “Flood Congress” to express our collective disillusionment with the corporate “free trade” agenda.

Following a few solid weeks of action it is time to escalate. Thursday, March 19, we will flood the halls of Congress in silence, in protest of the secretive processes that have silenced our voices and the democratic process.

This is a key moment to #stopfasttrack, with a wavering Congress pressured from both sides. We can defeat this anti-democratic bill before it even begins. At some point during the action we may break the silence to show that, as we organize, our voices are amplified and we reclaim democracy. Wear blue!

We will gather next Thursday, March 19, at 11:30 AM in the downstairs food court in Union Station (Washington D.C.) for lunch and training before we head to Congress. Please RSVP to mackenzie@popularresistance.org so that we can keep in touch with you if details change.

The action will end by 4PM, probably earlier. It action is not likely to result in arrest.

Why we must stop Fast Track Now!

Hundreds of the world’s largest multinational corporations (like Monsanto, Goldman Sachs, Pfizer, BP, and Exxon) are doing everything they can to protect and grow their profits at our expense under the facade of “free trade,” a.k.a. freedom for corporations, but not for you and I. Only five of the TPP’s 29 chapters even deal with trade. The agreements are primarily intended to extend corporate power and undermine local, state, and national sovereignty.

For the last 6 years these corporations have deviously crafted secret deals with President Obama’s full support and they are now trying to push these through Congress with a clearly anti-democratic process known as “Fast Track.” The public, and even Congress, do not have access to the full text of the TPP and TTIP and Fast Track would slip them into law under the radar.

If Congress passes Fast Track, for the next 7 years presidents will have the power to negotiate and sign more secret agreements that fundamentally shift the global balance of power away from the public and into the control of multinational corporations and big finance.

Fast Track is a game changer. Help us stop it now! Contact Mackenzie@PopularResistance.org and spread the word.