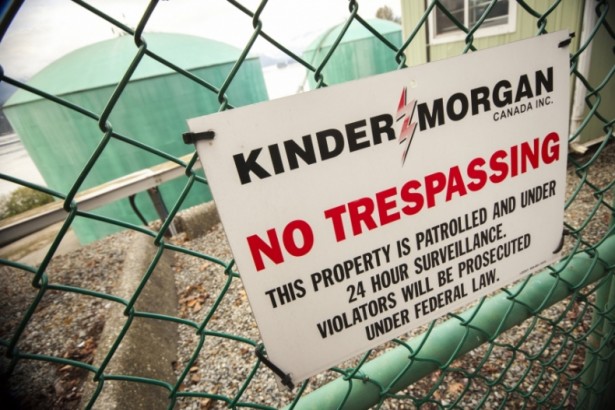 Canada’s pipeline watchdog has given two of North America’s largest energy companies up to six months to fix what industry insiders have described as a series of “ticking time bombs.”

The National Energy Board waited eight years after U.S. regulators raised the alarm about substandard materials, finally issuing an emergency safety order in February. At least one Canadian pipeline with defective materials blew up during that period.

Newly-released federal documents show that Texas-based Kinder Morgan and Alberta-based Enbridge are both looking into the use of defective parts purchased from Thailand-based, Canadoil Asia, that recently went bankrupt. But the companies were not immediately able to say where they installed the dodgy parts. It’s a problem that also struck Alberta-based TransCanada, which had defective materials in its own pipelines, including one that blew up in 2013.

The review emerged from the emergency safety order issued last February by Canada’s National Energy Board (NEB) when it launched a crackdown on companies using shoddy parts in their pipelines. This crackdown followed a series of failures and warnings that date back to at least 2008 when U.S. regulators noticed that the industry was using substandard materials in pipelines that were cracking apart during testing.

Eight years later, Canada’s National Energy Board, ordered energy companies to verify whether they had used any of the defective components. If they found any, they were required to explain how they would fix the problem. The NEB denies it was sitting on the problem for the eight-year period.

Pipeline companies can’t figure out what parts they used

Five months after that emergency safety order, two energy giants – Alberta-based Enbridge Inc. and Texas-based Kinder Morgan -are still not able to say exactly what they put into their pipeline infrastructure, and the NEB says it’s “appropriate” to give them a few more months to prove the lines are safe.

Engineers who have worked for years on pipelines say that it’s a disturbing story like this one that has prompted them to lose faith in the industry and its watchdogs as major energy companies continue to suffer significant ruptures, spills and other disasters. Both the industry and its regulators insist that there are no immediate threats because they’re keeping an eye on the situation. But the critics say that sloppy record keeping, inappropriate conversations, weak oversight and a race for cheap parts are leaving many dangerous pipelines in the ground.

“There aren’t people in these big companies on staff any more who understand the fittings design or what they’re really doing with these things,” said Dennis Maki, 65, a professional engineer who recently retired after spending more than 40 years in the pipeline industry. “Purchasing (departments from companies are) going out and buying the stuff worldwide from the cheapest vendor, and what have you got? You’ve got, in a lot of cases, ticking time bombs.”

Defects in pipelines can sometimes stay in the ground for years without incident. A recent investigation report into a 2014 explosion involving a TransCanada pipeline near Otterburne, Manitoba, revealed that a crack, which formed more than 50 years earlier due to bad welding, was the cause of the rupture. It started a fire that burned for 12 hours and forced evacuations in the immediate vicinity.

Right after the Canadian watchdog issued its February safety order, representatives of the companies began to email and call their contacts at the Canadian regulator, explaining that they didn’t understand what was going on.

In one of the exchanges, an Enbridge employee told the NEB in a Feb. 23 email that it needed more information about what to look for regarding parts from a company, Canadoil Asia, that was founded in 1999 and which went through bankruptcy restructuring in April 2014. The Enbridge employee wrote in the email about being uncertain of specific details such as when their own supplier went bankrupt, which parts were faulty and what was wrong with them.

Another engineer from oilsands company, Canadian Natural Resources Limited also expressed confusion in a Feb. 29 email, saying that the company had “very little” information available about the Canadoil Asia fittings.

Three engineers at the NEB – Suzanne Bouzane, Joe Paviglianiti and director of integrity management Chris van Egmond – shifted the discussions off email, recommending instead that the industry and its regulators should pursue their interactions through a series of secret phone calls.

The NEB has extraordinary powers under Canadian legislation. Not only is it a law enforcement agency that has full powers of investigation, allowing it to compel its regulated companies to produce evidence, answer questions and follow orders, it also has the powers of a federal court. With those powers come responsibilities to be fair and transparent. The employee code of conduct requires NEB staff to document all discussions related to matters that are before the Board, such as a safety order, but they didn’t do so in this case.

Barter added that the NEB retains all relevant documentation when required, but did not explain how it decides what is relevant to keep as a formal record.

NEB offered extensions before being asked

The NEB said that Kinder Morgan and Enbridge were the only companies that asked for extensions on the safety order from February, and said it granted them since it wants to ensure it has complete information.

Barter’s explanation is somewhat different from what the NEB told Enbridge when it offered an extension, before the company had even submitted its request. The NEB’s “integrity management” division said it would grant the extension to reduce the regulator’s own workload.

“I was able to chat quickly with my director about the possibility of Enbridge needing an extension on the timeline for the Substandard Materials Order, and she said she would have no issues with granting an extension,” wrote Bouzane, one of the NEB engineers, on March 1. “Rather than the interim reports as you suggested, we would rather just wait and have a complete report when it is ready (this way we are not reviewing data more than once)… The volume of records to be reviewed is sufficient reasoning to request the extension.”

Barter said it was “appropriate” for the NEB to grant extensions for companies such as Enbridge and Kinder Morgan that are affected by factors like the size, complexity and age of their systems.

Through all of the confusion, Kinder Morgan Canada, which only operates one major oil pipeline in Canada, the 63-year old Trans Mountain line – a route between the Edmonton and Vancouver regions that the company now wants to expand – said it needed to do a “large-scale” review to determine whether its engineers can prove whether recent work done on the aging pipeline was safe.

“The majority of the files are located in offsite storage,” Kinder Morgan Canada wrote in a May 17, 2016 letter that was signed by its Calgary-based regulatory lead Megan Sartore.

She also wrote in the letter that the company was comparing old test reports to verify whether it installed substandard parts or any fittings purchased from Canadoil Asia.

National Observer attempted to email and call Kinder Morgan Canada more than a dozen times since May to get an explanation for its “offsite” records and missing engineering information. It finally responded on Tuesday with a short email.

“All regulated companies under the NEB’s authority received this (safety order) letter,” Kinder Morgan wrote in the email.

“Trans Mountain requested an extension due to the volume of records over the past number of years we to need to review in order to provide the Board with a thorough assessment of its findings. The Board granted approval of the extension to comply. Kinder Morgan Canada and Trans Mountain take safety and integrity of its systems very seriously and work diligently to ensure that they comply with all regulatory requirements and in this instance Board orders.”

A spokesman for Calgary-based Enbridge Inc. said it needed time to review more than 700 individual projects in order to respond to the safety order. But in the meantime, the company, which is hoping to develop several pipeline expansion projects including the west coast Northern Gateway project, said its own system was safe and that the delays reflect no weakness in its record keeping.

“While our review will determine whether we have any of the parts identified by the NEB in our system, it remains safe as it incorporates multiple layers of protection,” said spokesman Graham White. “We invest significantly in the fitness of our pipelines and facilities including leak detection, inspections and continuous monitoring for safety and reliability. It’s also important to know newly installed pipe is pressure tested with water to ensure its strength prior to going into service.”

White added that the emails exchanged between Enbridge’s employee and the NEB engineer reflect how the company was trying to understand the order so that it could respond with the right information. He also said that Enbridge completed a comprehensive review of its own records and testing, finding no evidence that it had installed substandard parts on its pipelines.

However, the company will do more research to ensure there are no risks.

“Enbridge will complete an engineering assessment of the Canadoil Asia fittings to further validate their continued safe use and report those findings to the NEB,” White said.

Enbridge also said in a new letter sent to the NEB on June 24 that it had confirmed locations of more than 100 Canadoil Asia fittings used in its network in different locations and that it planned to complete the engineering assessment on these before the end of October.

TransCanada had its files and didn’t need extension

Calgary-based TransCanada Corp – the pipeline company that wants to build a new cross-Canada pipeline called Energy East – said it had complied with the safety order. It had already been reviewing these issues after a section of a natural gas pipeline with substandard parts blew up near a hunting cabin in Northern Alberta in October 2013.

“We proactively took additional steps to improve our oversight and quality for fittings,” said TransCanada spokesman Terry Cunha. “These included auditing all fitting suppliers to confirm they were not susceptible to similar issues, placing additional requirements on fitting orders and strengthening our third party inspection process.”

Meantime, Enbridge’s June 24 submission also included a letter that it had received from another supplier, Quebec-based Ezeflow, which manufactured substandard parts that were used on the TransCanada pipeline. The president of Ezeflow, Pierre Latendresse, said in that letter, dated Feb. 24, that these parts were supplied due to what he described as an “isolated incident.”

Latendresse said that all parts his company supplied to Enbridge met the “usual Ezeflow quality standard and workmanship.”

The National Energy Board also finds itself under review by the newly elected Liberal government that has pledged to modernize the regulator and review its management. The government launched a comprehensive review last month of different aspects of federal oversight of industry. The proposed process would include public consultations along with a full review of the NEB’s mandate to be led by a special panel.