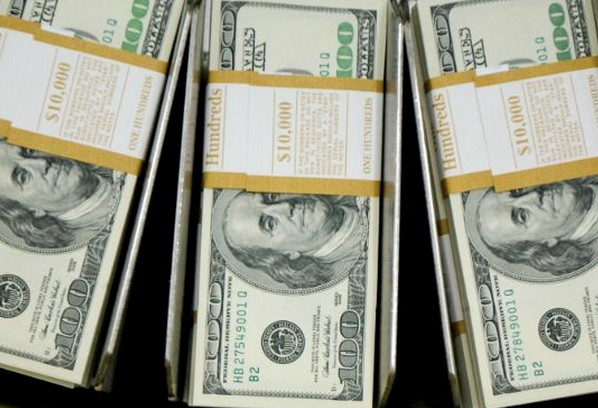 Time For The Nuclear Option: Raining Money On Main Street

‘Conventional monetary policy has failed,’ writes Brown. An economy in service of the people, not industry and the banks, is what’s needed now. (Photographer: Andrew Harrer/Bloomberg)

Predictions are that we will soon be seeing the “nuclear option” — central bank-created money injected directly into the real economy. All other options having failed, governments will be reduced to issuing money outright to cover budget deficits. So warns a September 18 article on ZeroHedge titled “It Begins: Australia’s Largest Investment Bank Just Said ‘Helicopter Money’ Is 12-18 Months Away.”

Money reformers will say it’s about time. Virtually all money today is created as bank debt, but people can no longer take on more debt. The money supply has shrunk along with people’s ability to borrow new money into existence. Quantitative easing (QE) attempts to re-inflate the money supply by giving money to banks to create more debt, but that policy has failed. It’s time to try dropping some debt-free money on Main Street.

The Zerohedge prediction is based on a release from Macqurie, Australia’s largest investment bank. It notes that GDP is contracting, deflationary pressures are accelerating, public and private sectors are not driving the velocity of money higher, and central bank injections of liquidity are losing their effectiveness. Current policies are not working. As a result:

There are several policies that could be and probably would be considered over the next 12-18 months. If private sector lacks confidence and visibility to raise velocity of money, then (arguably) public sector could. In other words, instead of acting via bond markets and banking sector, why shouldn’t public sector bypass markets altogether and inject stimulus directly into the ‘blood stream’? Whilst it might or might not be called QE, it would have a much stronger impact and unlike the last seven years, the recovery could actually mimic a conventional business cycle and investors would soon start discussing multiplier effects and positioning in areas of greatest investment.

A global recession starting in 2016 led by China is now our Global Economics team’s main scenario. Uncertainty remains, but the likelihood of a timely and effective policy response seems to be diminishing. . . .

Helicopter money drops in China, the euro area, the UK, and the U.S. and debt restructuring . . . can mitigate and, if implemented immediately, prevent a recession during the next two years without raising the risk of a deeper and longer recession later.

In the UK, something akin to a helicopter money drop was just put on the table by Jeremy Corbyn, the newly-elected Labor leader. He proposes to give the Bank of England a new mandate to upgrade the economy to invest in new large scale housing, energy, transport and digital projects. He calls it “quantitative easing for people instead of banks” (PQE). The investments would be made through a National Investment Bank set up to invest in new infrastructure and in the hi-tech innovative industries of the future.

Australian blogger Prof. Bill Mitchell agrees that PQE is economically sound. But he says it should not be called “quantitative easing.” QE is just an asset swap – cash for federal securities or mortgage-backed securities on bank balance sheets. What Corbyn is proposing is actually Overt Money Financing (OMF) – injecting money directly into the economy.

Mitchell acknowledges that OMF is a taboo concept in mainstream economics. Allegedly, this is because it would lead to hyperinflation. But the real reasons, he says, are that:

OMF as a Solution to the EU Crisis

These provisions were amended out of the report, says Prof. Mitchell, largely due to German hyperinflation paranoia. But he maintains that Overt Money Financing is the most effective way to solve the Eurozone crisis without tearing down the monetary union:

Tim Worstall, writing in the UK Register, objects to Corbyn’s PQE (or OMF) on the ground that it cannot be “sterilized” the way QE can. When inflation hits, the process cannot be reversed. If the money is spent on infrastructure, it will be out there circulating in the economy and will not be retrievable. Worstall writes:

QE is designed to be temporary, . . . because once people’s spending rates recover we need a way of taking all that extra money out of the economy. So we do it by using printed money to buy bonds, which injects the money into the economy, and then sell those bonds back once we need to withdraw the money from the economy, and simply destroy the money we’ve raised. . . .

If we don’t have any bonds to sell, it’s not clear how we can reduce [the money supply] if large-scale inflation hits.

The problem today, however, is not inflation but deflation of the money supply. Some consumer prices may be up, but this can happen although the money supply is shrinking. Food prices, for example, are up; but it’sbecause of increased costs, including drought in California, climate change, and mergers and acquisitions by big corporations that eliminate competition.

Adding money to the economy will not drive up prices until demand is saturated and production has hit full capacity; and we’re a long way from full capacity now. Before that, increasing “demand” will increase “supply.” Producers will create more goods and services. Supply and demand will rise together and prices will remain stable. In the US, the output gap – the difference between actual output and potential output – is estimated at about $1 trillion annually. That means the money supply could be increased by at least $1 trillion annually without driving up prices.

Using 2012 figures (drawing from an earlier article by this author), the velocity of M1 (the coins, dollar bills and demand deposits spent by ordinary consumers) was then 7. That means M1 changed hands seven times during 2012 – from housewife to grocer to farmer, etc. Since each recipient owed taxes on this money, increasing M1 by one dollar increased the tax base by seven dollars.

Total tax revenue as a percentage of GDP in 2012 was 24.3%. Extrapolating from those figures, $1.00 changing hands seven times could increase tax revenue by $7.00 x 24.3% = $1.70. That means the government could, in theory, get more back in taxes than it paid out. Even with some leakage in those figures and deductions for costs, all or most of the new money spent into the economy might be taxed back to the government. New money could be pumped out every year and the money supply would increase little if at all.

Besides taxes, other ways to get money back into the Treasury include closing tax loopholes, taxing the $21 trillion or more hidden in offshore tax havens, and setting up a system of public banks that would return the interest on loans to the government. Net interest collected by U.S. banks in 2014 was $423 billion. At its high in 2007, it was $725 billion.

Thus there are many ways to recycle an issue of new money back to the government. The same money could be spent and collected back year after year, without creating price inflation or hyperinflating the money supply.

This not only could be done; it needs to be done. Conventional monetary policy has failed. Central banks have exhausted their existing toolboxes and need to explore some innovative alternatives.