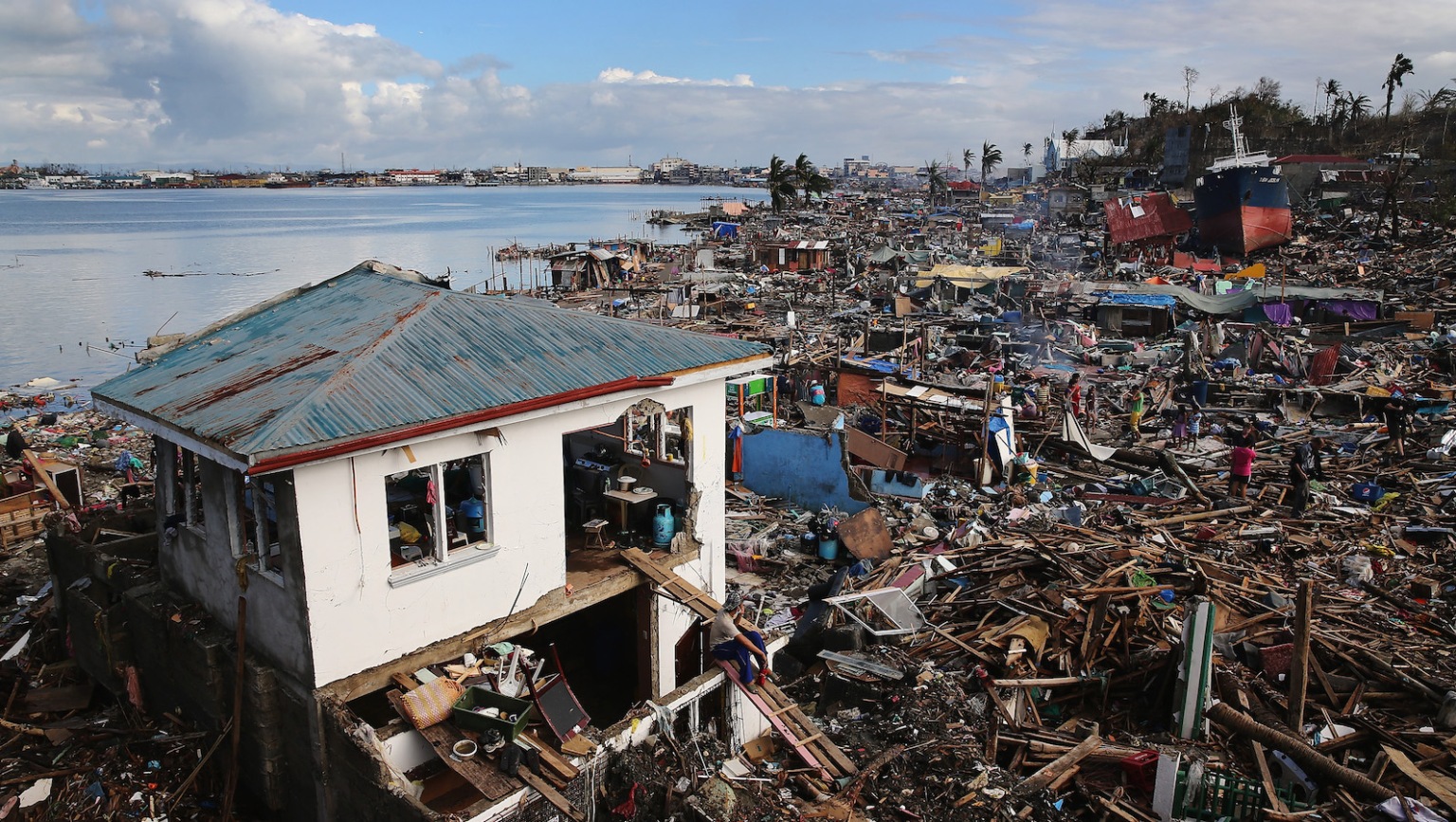 Above Photo: Devastation from Typhoon Haiyan, which ripped through the Philippines in 2013. Dan Kitwood / Getty Images.

Scientists have long warned that time is of the essence to stop emitting greenhouse gases into the atmosphere. Now, in a new international report released on Monday, they argue the clock is also ticking on efforts to adapt to the devastating consequences of climate change. Rising seas, scorching wildfires, and devastating droughts already jeopardize billions of people worldwide — these, and other climate impacts, are expected to get much worse over the coming decades.

“Any further delay” in global action, the report says, “will miss a brief and rapidly closing window of opportunity to secure a liveable and sustainable future for all.”

The new report is the second of three parts of the latest global assessment by the Intergovernmental Panel on Climate Change, or IPCC, a body of leading climate experts from around the world. The first report, which the United Nations secretary-general called a “code red for humanity,” was released last summer and addressed the physical science of climate change, warning that global warming was “widespread, rapid, and intensifying.” This week’s report highlights climate impacts and ways to adapt to them, and the third, slated for publication in April, will focus on ways to limit greenhouse gas emissions.

If the first report in the series conjured up a harrowing vision of a world on the brink of climate catastrophe, this week’s analysis brings that world into sharper detail. Region by region, the document describes “widespread, pervasive impacts” to ecosystems, people, settlements, and infrastructure.

In many areas rising temperatures have already caused greater and more extensive damage to the natural world than suggested by previous assessments. Half of the species assessed by the IPCC have been forced to migrate toward the poles or to higher elevations, the report says, while melting glaciers and thawing permafrost are likely causing “irreversible” changes to the land and seas.

Meanwhile, climate change is amplifying human conflicts and causing widespread damage to people’s physical and mental health. Animal and human diseases are cropping up in new areas, the report says, while more extreme wildfires and other disasters are causing increased respiratory distress, trauma, and the erosion of livelihoods and cultures. These impacts are not evenly distributed throughout the world, and are “strongly concentrated among the poorest vulnerable populations,” according to the report.

There is still time to protect people and ecosystems from some of the worst impacts of climate change, the report says, but time is slipping away. The authors urge world leaders to prepare for worsening conditions by, among other things, conserving at least one-third of the world’s natural habitats. Forest conservation and management, for instance, can limit climbing risks from disease and wildfires, while restoring sponge-like wetlands and rivers can keep flooding in check. Preserving biodiverse forests and soggy peatlands has the added benefit of keeping some of the world’s biggest carbon sinks intact.

Changes to physical infrastructure, like building levees to safeguard against rising sea levels, can also help protect the up to 3.6 billion people who live in areas highly vulnerable to climate change, the report says. Other options include planned relocation — ”aligned with sociocultural values and development priorities, and underpinned by inclusive community engagement processes.”

Although adaptation efforts like these have become more commonplace since the IPCC’s last assessment report, released in 2014, the authors observe that most countries’ efforts are still small in scale and focused on the near term. Countries need to up the ambition of their plans, and fast: With every fraction of a degree the planet warms, it becomes more difficult to implement new adaptation strategies. At 1.5 degrees Celsius, up to 14 percent of species on land face likely extinction. At 2 degrees C, snowmelt availability for irrigation and drinking water will decline by 20 percent, and flood damages could double — threatening the 1 billion people in low-lying cities and settlements. The authors recognize even the most ambitious adaptations won’t prevent all impacts; at this point, adaptation is simply about reducing as much damage as possible.

The report also stresses the need for approaches that mitigate climate change’s disproportionate impacts on the most vulnerable communities. Between 2010 and 2020, human mortality from floods, droughts, and storms was 15 times higher in highly vulnerable regions than in areas that are better insulated from climate change. Social protection programs like cash transfers and public works programs, the report says, can help mitigate such yawning inequalities while also delivering valuable co-benefits, like boosting gender equality and alleviating poverty. And incorporating Indigenous and community knowledge into policymaking can mitigate climate risks while addressing historical and ongoing patterns of oppression.

“Putting vulnerable groups and countries at the heart of the decision-making process on how we respond to climate change can make societies more resilient,” Edwin Castellanos, director of the Sustainable Economic Observatory at the University of the Valley of Guatemala and a lead author of the report, told reporters on Sunday.

Environmental advocates welcomed the report’s focus on social justice while also highlighting the report’s implications for the controversial topic of “loss and damage,” which describes the idea that the countries most responsible for climate change should help pay for its devastating impacts to the developing world. According to Preety Bhandari, senior adviser in global and climate finance for the World Resources Institute, the IPCC’s focus on the Global South puts loss and damage “squarely on the table” for negotiators and politicians to address.

Bhandari and others hailed the report as an urgent call for world leaders to center justice at the next U.N. climate conference, which will take place in November in Egypt. That conference, known as COP27, will provide key insights into how wealthy countries will support developing countries in their efforts to adapt to a warming world and transition away from fossil fuels.

“We are hoping for a more positive outcome,” Bhandari said, “in terms of recognition of the needs of the vulnerable countries, and finding a solution to support them.”