Time To Fight For Health Care For Everyone

ACTION ALERT: Rep. Mark Sanders and Sen. Rand Paul have introduced the Obamacare Replacement Act in the House and the Senate. It will fully privatize the healthcare system driving up prices and driving down coverage. We must have National Improved Medicare for All legislation in the House and Senate too. There is a version in the House – HR 676: the Expanded and Improved Medicare for All Act. Please call Senator Bernie Sanders and urge him to introduce a senate version now. CLICK HERE TO CALL.

With the already-failing ‘Affordable Care Act’ under attack by the new administration and Congress, health care is back in the national spotlight.

People are struggling to afford the rising price of premiums and the large out-of-pocket costs required before coverage kicks in. Families are going without necessary care. Tens of millions of people are without insurance of any kind. And last year almost 29,000 people died because of lack of access to care.

This doesn’t happen in other industrialized nations. It doesn’t have to be this way. There is a proven solution. That’s why

Popular Resistance is launching a new campaign to push for National Improved Medicare for All.

The new campaign is called “Health Over Profit for Everyone (HOPE): Making health the bottom line.” It has the sole focus of shifting the political culture in the United States so that National Improved Medicare for All (NIMA) is the only politically-feasible solution in the next four years.

We can do it! Just as we have worked together in broad coalitions to put reclassification of the internet on the table and to stop the Trans-Pacific Partnership, we also have the power to win NIMA.

A strong group of NIMA advocates have joined to form the steering committee. We’ve created an activism website at HealthOverProfit.org that contains information and tools you’ll need to educate, organize and mobilize. We’ll provide national conference calls and coordinate days of action.

We encourage you to join as an individual or an organization. Form your own local group. Let us know what you need to get started.

Check out the Action page for calls to action and post your actions there.

Check out the Tools pages for educational, action and media resources. 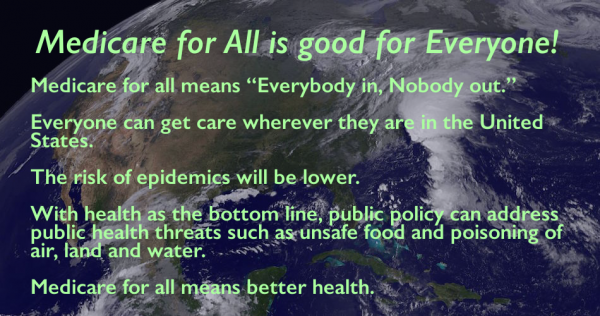