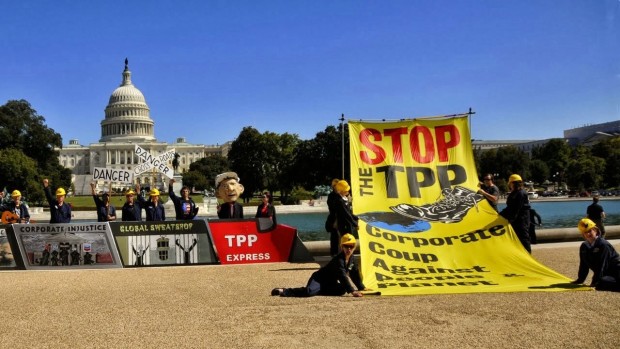 Nov. 8th to 14th Week of Action: Say NO to Fast Track and Unjust Trade!

This fall, communities across the U.S. will once again join international allies in a global week of action against unjust trade. With Obama pushing to announce a TPP “framework” in November and the threat of Fast Track tripling in the lame-duck session, we need to demonstrate that hundreds of thousands still oppose corporate agreements meant to put profit before people and the planet.

Let us know if you think your community can hold an action of any kind this November, and help us stand beside those resisting unjust trade from New Zealand to New York.

We’re marking our calendars for Nov. 8th to 14th, when communities across the U.S. will once again stand alongside international allies calling for an end to the TPP and unjust agreements.

If you live in the United States, this week is also important because it is when members of Congress will return to Washington, DC for the first time after the elections. The period between Thanksgiving and the Winter Break is often when Congress passes toxic bills because they think that the public is not paying attention. We must let them know that we are watching and we oppose Fast Track.

Let us know if you think your community could be one of those demonstrating that millions still oppose toxic trade – from one side of the Pacific to the other.

If you are unfamiliar with the Trans-Pacific Partnership and its sister, the Trans-Atlantic Trade and Investment Partnership known as TAFTA, click here to read articles about the trade agreements or visit www.FlushtheTPP.org.

Fast Track,also called Trade Promotion Authority, is a law that Obama is asking Congress to pass that would give the President the power to negotiate and sign these massive agreements with minimal Congressional oversight. Congress would have a short period of time to review the thousands of pages of legal language, restricted debate and no right to make amendments. Such a process is undemocratic and untransparent. It would make a review of the impacts of these agreements impossible.

We must stop Fast Track and demand that we know what is in these agreements and what it means to our lives and our economy.