All photos from the Climate Disobedience Center

Nearly 500 people from across New England rally at the last major coal-fired power plant in New England without a shut-down date.

BOW, NEW HAMPSHIRE — The Merrimack Generating Station has polluted the air, water, and climate in New Hampshire for decades while the plant’s out-of-state owners benefit from millions of dollars in taxpayer subsidies to keep the plant running. 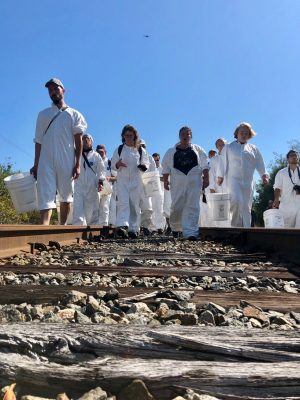 As a part of the week of Climate Action happening around the globe, hundreds of activists from New Hampshire are taking matters into their own hands in an effort to stop the climate crisis and force a just transition to 100% renewable energy by 2030. The Climate Disobedience Center and 350NH Action are two members of the No Coal No Gas coalition who planned this rally and action.

Over 60 individuals participating in nonviolent direct action walked into the plant through the train tracks. There was a large police presence at the plant and on the surrounding roads. As soon as they crossed the barricade into the plant property, half the group was arrested. Not long after, police wearing what appeared to be riot gear descended on the group and arrested the rest of them. They were taken out of the plant in four County Sheriff vans and a school bus and escorted to Merrimack County Jail. The latest count was 67 individuals arrested.

While those individuals were being arrested, a rally of over 300 people sang, chanted, and cheered on the action takers from a nearby baseball field. Various speakers and musicians participated, giving their perspective on the need for the Merrimack Generating station to be shut down. 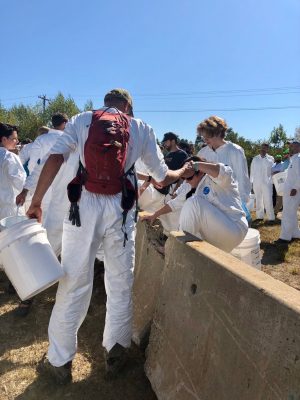 Barbara Peterson, a member of Nonviolent Citizen Action, says “The fossil fuel industry doesn’t care about clean air, water, and soil.“Their priority is profit. It’s our job to say no to coal and other unsustainable energy sources. If we don’t stand up, put our bodies in the way of them destroying our ability to live on this earth, who will?”

This action sends a message to the owners of the coal plant that it is unacceptable to profit off of the destruction of the climate. Individuals in positions of power have failed to protect the climate and it is now up to ordinary people to make the changes necessary in the time we have left. We hope that people in power will follow our lead and make change in a direct way to stop the climate crisis in its tracks.

From Quincy Abramson, resident of Bow, NH said, “My baby brother just turned four and he lives in Bow with my dad. I don’t want him to grow up in danger, the way so many people have, with a coal plant right down the road. I want to shut down the plant to ensure a safe and prosperous future for him and for all of us.” 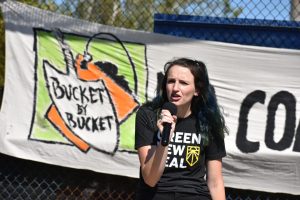 Quincy Abramson speaks at the rally.

Emma Schoenberg, of the Climate Disobedience Center, stated, “The coal industry and the larger fossil fuel industry have been reaping profits by stealing from our future for generations. Any nonviolent act that prevents fossil fuels from being burned is an act of reclaiming a small piece of the future that is being stolen from us.” She added, “Meanwhile, those occupying positions of political and economic power have consistently refused to act, so regular people are increasingly taking matters in our own hands.”

Lila Kohrman-Glaser, an organizer with 350NH Action, says, “Last year ratepayers paid $50 million just to keep this plant open even though it provides only about 1% of our electricity. The out-of-state owners are getting rich off of the destruction of our climate and environment and our elected officials have done nothing to stop them.  We won’t stand for decision-makers’ corruption and collusion with the fossil fuel industry anymore.”

“For years I’ve worked as an organizer trying to stop the climate crisis. It wasn’t until taking direct action to shut down Merrimack Station that I saw a shift in our community,” explains Emma Shapiro-Weiss, Organizer with 350NH Action. “Folks on the ground in New Hampshire know the health, environmental and economical impacts that this plant has on our state and we won’t stand for it anymore.”

This is just the beginning of the fight to end the use of fossil fuels in New Hampshire. The climate crisis is hurting people here and around the world. Moving forward, the No Coal No Gas coalition will continue to take matters into their own hands if leaders continue to fail to act.