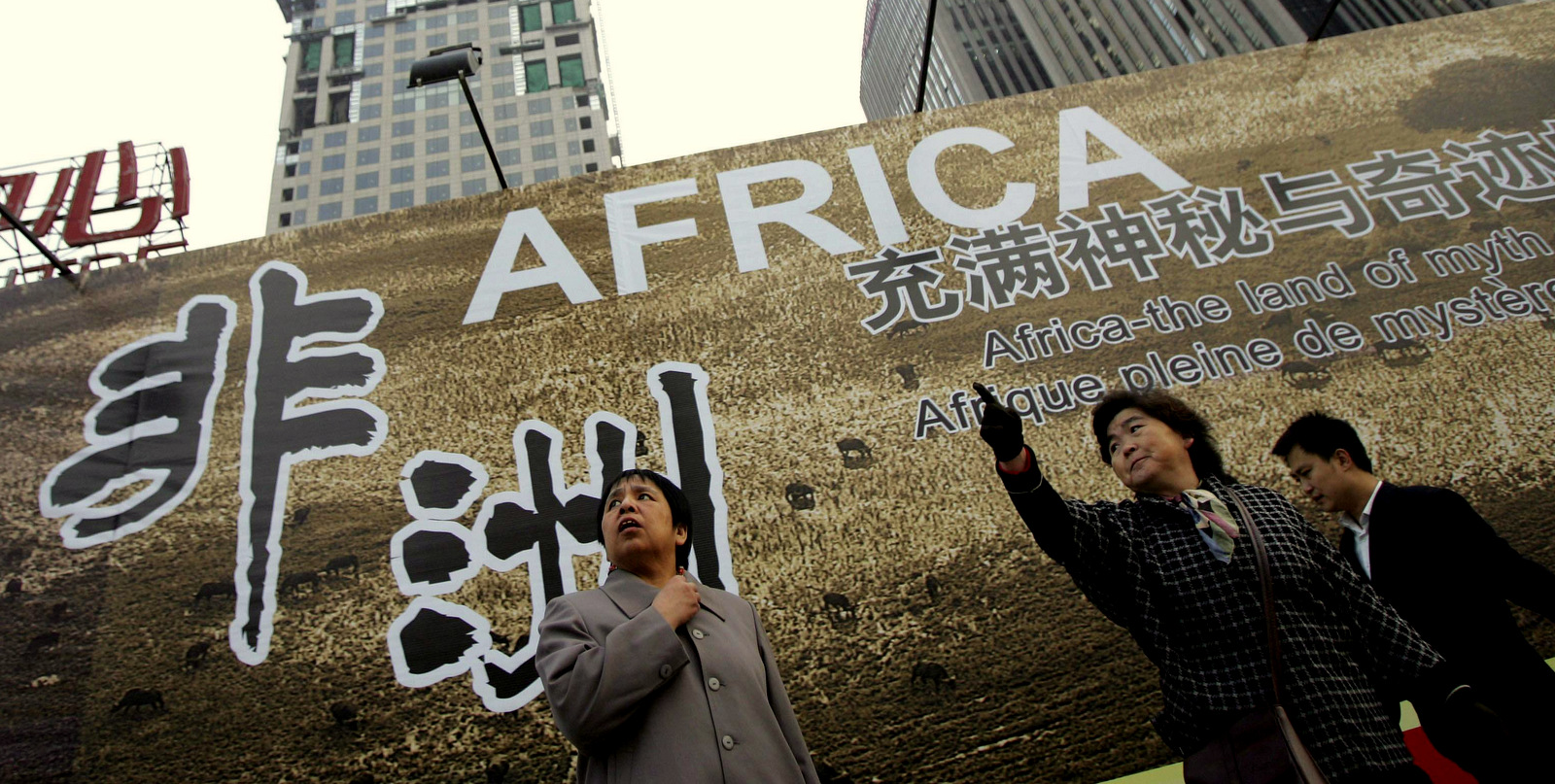 Tired Of US “Aid” (Exploitation), Africa And Global South Look To China

Above Photo: Chinese women stand in front of a billboard which promotes the China-Africa summit meeting, outside a hotel in Beijing. (AP/Greg Baker)

How much can Raytheon, Mastercard, Nokia, Monsanto and the like be trusted to invest in long-term outcomes in the global South? When you see the actors behind U.S. ‘aid and development’ in Africa, is it any wonder that African leaders would look for any other partner to work with?

BEIJING — There has been a growing focus on the economic development underway in Africa. There is a reason behind this seemingly new interest of Western powers in events happening in Africa, and the reason is simple: China is a new power dominating business on the continent and has clearly caught the West’s attention.

China now has partner nations spanning the entire continent from Mauritania to South Africa, in a growing number of relationships that challenge the perceived hegemony of the triumvirate of Western capital, military, and NGO operations. This is making the U.S. nervous, as more African nations begin to see China as the better choice as an economic partner, due to Beijing’s fewer-strings-attached approach.

In order to better understand how U.S. aid and investment in infrastructure work in Africa, it’s best to look at the Western corporations that function as “philanthropy contractors.” One of these U.S.-based philanthropic giants that dominate aid and development in Africa is the well-known Bill & Melinda Gates Foundation.

One prime example of how U.S. aid organizations operate in Africa is a Gates Foundation initiative that was launched in Nairobi, Kenya, where the foundation created a series of “financial inclusion labs” in a partnership with Mastercard. The Mastercard project, launched in 2014, was a part of the Gates Foundation’s “Financial Services for the Poor” program, meant to provide more access to “digital payment options” for people in the global South.

Publicly, what this project did was provide electronic payment services to citizens of Nairobi because payment-processing giant Mastercard just felt bad they didn’t have them.

In reality, what the project did was secure the market of Nairobi and the users of the Mastercard system as customers for the corporation, without Mastercard actually having to risk any of its own money. Mastercard even confirmed that this was their reasoning in a press release issued at the time, which said the grant from the Gates Foundation gave Mastercard access to “new markets that may otherwise be commercially unviable” by paying all of their costs to enter the market.

The Gates Foundation uses its influence to aid other corporate partners to secure contracts in Africa too. One such company that Bill Gates is a personal cheerleader for is agriculture giant Monsanto, which the Gates Foundation portrays as a key partner in ending world hunger. Monsanto has a reputation for using the vulnerability of countries in need of agricultural aid to its own advantage to crush local production networks, as it attempted to do in Haiti after the 2010 earthquake, which eventually led to protests by farmers, with some even burning Monsanto seeds.

These kinds of protests surrounding Monsanto’s effects on local economies have also played out in Africa — one example being Kenya, where GMO imports were banned in order to protect Kenyan agriculture. When the government tried to reintroduce GMO food, all sectors of Kenyan society took to the streets to voice their opposition. Since implementing this ban, Kenya has faced pressure from none other than the Gates Foundation, which is spending its time, money and political capital on behalf of Monsanto to reverse the ban on GMO imports.

The Gates Foundation even practices this form of philanthropic blackmail at home in the U.S. The prime example of this was the Foundation’s championing of “Common Core” programs in schools. Common Core, which continues to be highly unpopular among U.S. parents, is an initiative pushed by the Gates Foundation, with pressure applied through the policy that the charity would not provide money to schools that didn’t implement their approved curriculum.

Clearly, these practices aren’t limited strictly to the Gates Foundation, Mastercard, Monsanto, or any other single U.S. corporation. Another example that was highlighted last year during the U.S. presidential election was the Clinton Foundation, its donors, and its contract recipients in reconstruction and aid projects.

It is in this framework that one can see that the U.S. philanthropy industry doesn’t necessarily act as an altruistic charity but rather as a source of corporate subsidies disguised as altruism.

These foundations partner with everyone, from defense contractors to foreign despots — convenient and seemingly indiscriminate couplings that should make anyone question their motives and how well the corporations responsible for many of the world’s problems can really be trusted to solve them.

How much can Raytheon, Mastercard, Nokia, Monsanto and the like be trusted to invest in long-term outcomes in the global South? When you see the actors behind U.S. ‘aid and development’ in Africa, is it any wonder that African leaders would look for any other partner to work with?

It just so happens that Africa has found a much more reliable partner that is rising to the rank of a global superpower.

China spends around $5 billion a year on direct ‘aid’ projects, which are acknowledged to be effective even by Western analysts such as Bradley Parks — executive director of AidData, an organization that tracks effects of global aid programs — who conceded in the Washington Post that “many African leaders insist that China is a more reliable and efficient partner,” than the U.S. However, China also projects investments through another channel: direct investment in infrastructure and industry. Since a majority of Chinese industry is controlled by the state, there is no need for the philanthropic cover and subsidies like those provided by U.S. NGOs. The investment is just an extension of Chinese economic policy, which seeks to invest in lifting African economies as partners rather than making them clients.

China enacts this policy through massive development projects that bring jobs, attract investment, and promote the construction of innovative infrastructure. China is building everything from brand new cities, giant hydroelectric dams, and massive tech research centers to solar farms, highways and some of Africa’s largest rail networks.  These massive projects were all funded by Beijing, knowing that they would be long-term investments integral to Xi Jinping’s larger Belt-and-Road economic initiative that is written into the Chinese constitution.

Many U.S. analysts believe that the credit ratings and economic woes of Belt-and-Road partner nations are going to be a possible cause of the plan’s downfall. What China is actually doing is banking on these ‘junk’ rated countries in the global South — that comprise 60 percent of Belt-and-Road partners — to be very-long-term investment partners in a system that will challenge the Western capital dominance that impoverished these nations in the first place.

The differences between U.S. and Chinese approaches are night and day when one considers the long-term implications. Compare U.S. aid schemes like those described above — where short-term technocratic solutions provide multinationals with long-term customers and local monopolies — to Chinese investment, which doesn’t produce immediate returns but does contribute in other ways, such as being the largest driver of job creation in Africa.

While Washington tries to downplay conditions in Africa, there is some concern brewing among the pundit and analyst classes in the U.S. One such example of this realization taking root is neoliberal think-tank Eurasia Group’s founder, and editor for Time, Ian Bremmer, who is constantly producing content lamenting that China is the new global leader and the greatest threat to the U.S.-led world order.

According to Bremmer, many nations across the globe look at China and see a stronger leader, a more stable economic structure, the ability of central planning to create employment and stimulate economies, and China’s technological advances that rival those of the West. According to Bremmer, analysts in his camp who once believed “there was consensus that China would one day need fundamental political reform for the state to maintain its legitimacy,” now question that thesis and speculate that “China’s political and economic system is better equipped and perhaps even more sustainable than the American model.”

If Bremmer is to be believed — and, as a pro-U.S. neoliberal thinker, he should be, since he is inclined to distrust China — then it isn’t just the amount of money China dumps into projects that makes for such success, but the framework of how investment is implemented and the farsighted goals of these projects.

China is heavily investing long-term in a system specifically made for countries that have been rejected or ignored by the Western nations due to their perceived insignificance and making it Beijing’s priority to build these countries up as partners in Belt-and-Road rather than as neocolonial vassals. Compare this to the U.S., which has been interfering in African affairs and extorting the continent for centuries — and is now ruled by a man who calls these nations, in essence confirming their already established ‘junk’ status, “shitholes” — and it’s no wonder African leaders would rather work with Beijing.

The U.S. will attempt to create an idea that China is somehow “preying” on African nations (as if the West would never!), but it seems genuinely that this isn’t’ the case. What is really happening is that Africa is choosing to work with China and this, in turn, means that the U.S. stake in the continent is reduced and replaced by Chinese interests.

Concerns about the declining U.S. role in the continent are even surfacing in the U.S. military, which feels China will throw off “anti-terror” operations in Africa by stabilizing the continent and pushing U.S. security interests out. The U.S. military has expressed concern about this for years and now their fears seem to be playing out, as China increases security cooperation with partner states and has even built its first military base in Africa, just miles down the road from a U.S. base in Djibouti.

However, the big subversion of U.S. interests that is still forthcoming is the upset victory of Chinese investment over U.S. capital. Not only is China investing more money in Africa, Chinese projects and investment have proven to be much more popular than U.S. involvement in African countries.

In 2015, Chinese President Xi Jinping announced a new era of “win-win” development in Africa that would allow investors to “do good while doing right,” and it now seems to not only be paying off for the firms involved but also for the people of Africa. It should come as no surprise that Africans are rejecting U.S. aid and investment — which is often highly conditional or implemented with violence, while China works as an honest broker respecting African nations’ preservation of sovereignty and self-determination.

The U.S. continues to combat this freedom of the African partners by labeling it as “Chinese influence” and putting out “news” stories of “Chinese interference,” such as the one behind China’s alleged involvement in the recent coup in Zimbabwe that ousted President Robert Mugabe. According to U.S. sources such as CNN, China was guilty of facilitating the coup by Mugabe’s ousted Vice President because they didn’t do anything to stop it.

How CNN sees this as interference is unclear, but it demonstrates a general feeling among the U.S. elite that China is somehow cheating and that a major reason Africans prefer Chinese partnership to that of the U.S. can’t simply be Beijing’s respect for their partners’ sovereignty and internal affairs. However, this seems to be the reality. If the U.S. doesn’t figure that out soon, it is likely to be left in the wake of progress emanating from Beijing.