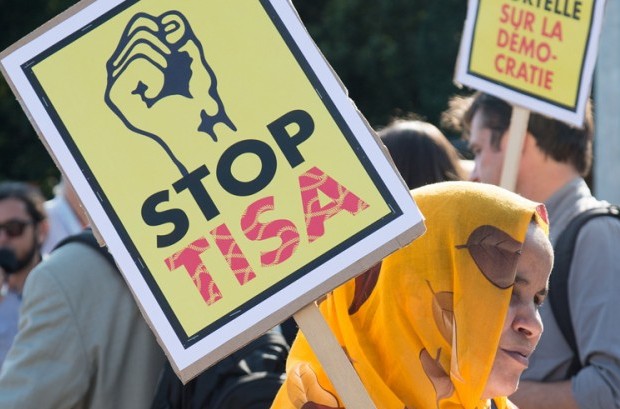 TiSA May Be Even Greater Threat Than TTIP

Note: Now that TTIP seems finished with major European powers calling for an end to negotiations; and TPP seems stalled in Congress, we need to educate and mobilize to stop the biggest agreement of the Obama trade agenda, the Trade in Services Agenda (TiSA).

TiSA is a blueprint for global privatization, to turn public services into commodities for big business profits

A global trade deal currently being negotiated in secret and involving 50 different countries could prove to be a serious threat to public services according to a briefing published today by campaign group Global Justice Now.

The Trade In Services Agreement (TISA)  is a proposed international trade treaty between 23 parties, including the European Union and the United States. Unlike most trade deals, TISA is about services, not goods. The briefing argues that this means it will affect areas like labour rights, banking regulation and whether public services like electricity and water are run for public good or private benefit.

“This deal is a threat to the very concept of public services. It is a turbo-charged privatisation pact, based on the idea that, rather than serving the public interest, governments must step out of the way and allow corporations to ‘get on with it’. Of particular concern, we fear TiSA will include clauses that will prevent governments taking public control of strategic services, and inhibit regulation of the very banks that created the financial crash. TISA will also affect countries that haven’t even had the opportunity to develop decent public services like Pakistan. No wonder Uruguay has already walked away from the talks. We urge MEPs to tell the European Union to do the same.

“Millions of people across the EU voiced their opposition to toxic trade deals like TTIP and TISA. A broad coalition of trade unions, civil society groups and progressive politicians are coming together to make sure that we put a stop to TISA as well as TTIP – both of them enormous corporate power grabs at the expense of democracy.”

The briefing, A blueprint for global privatisation argues that:

“Many people were persuaded to leave the EU on the grounds they would be ‘taking back control’ of our economic policy. But if we sign up to TISA, our ability to control our economy – to regulate, to protect public services, to fight climate change – are all massively reduced. In effect, we would be handing large swathes of policy making to big business.

“Two of the biggest challenges facing society right now are dealing with the climate crisis and trying to tame the unruly banks and financial markets that have caused so much damage to the global economy. What’s being proposed under TISA would massively restrict the ability of governments to take action on either front, at a time when flexible and effective policy intervention is so badly needed.”