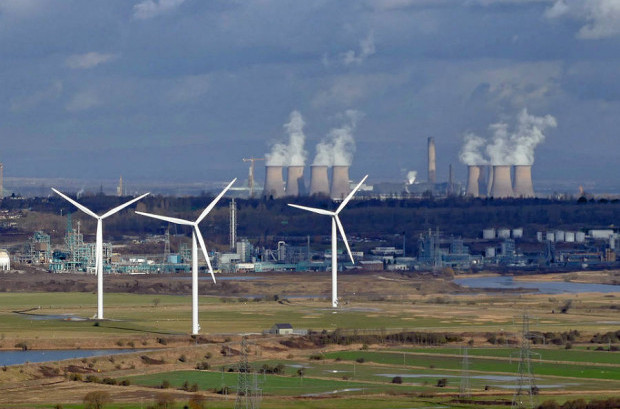 Above Photo: The world can meet more ambitious emissions targets with a major scaling back of coal and ramping up of renewable energy, a new UNEP report says. Credit: Andrew/CC-BY-2.0

A new UNEP report shows that the gap between the climate promises countries made at Paris and the emissions cuts needed is larger than previously thought.

Countries will have to phase out coal and invest in renewable energy even faster than previously expected to keep global warming below perilous levels and fend off the most dangerous impacts of climate change, according to a United Nations report released just before the next round of international climate talks.

The United Nations Environment Program on Tuesday released its annual report on the “emissions gap“—the distance between countries’ pledged commitments for meeting the targets of the 2015 Paris climate agreement and the pathways that scientists estimate could actually achieve those targets.

The report, prepared by dozens of scientists and incorporating the latest scientific findings, includes new information to help negotiators zero in on more ambitious commitments that might achieve the Paris Agreement’s most stringent target: keeping the rise in temperatures to 1.5 degrees Celsius since the start of the industrial era.

“The overarching conclusions of the report are that there is an urgent need for accelerated short-term action and enhanced longer-term national ambition, if the goals of the Paris Agreement are to remain achievable,” the report says. “And that practical and cost-effective options are available to make this possible.”

In other words, the world’s countries need to get moving—and fast. But there’s hope.

Staying Under 1.5C Tough, but Not Impossible

With each edition, the report’s message has become increasingly urgent as growing research suggests that reigning in global warming will require much more action than countries first outlined in their Intended Nationally Determined Contributions (INDCs) in advance of the Paris process.

In order to reach a 2030 target that would keep warming to 2 degrees, countries cumulatively will have to reduce their carbon dioxide emissions by 11 to 13.5 gigatons more than they committed to do in their INDCs. To meet the 1.5-degree target, they’ll have to cut emissions by 16 to 19 gigatons more than initially promised. That gap is bigger than previously estimated.

This “would imply a need for significantly faster and deeper reductions than previously anticipated,” the report says.

UNEP Executive Director Erik Solheim described the gap as “catastrophic” if it isn’t closed. The concentration of CO2 in the atmosphere that contributes to the greenhouse effect, warming the planet, reached another record high last year, hitting levels not seen in 800,000 years, the World Meteorological Organization reported on Monday.

This year’s UNEP gap report comes at a particularly challenging moment in the grueling, generation-long struggle to contain global warming that culminated in the Paris Agreement, the first comprehensive international treaty on climate change. Almost every nation on the planet agreed to take steps—determined by each country on its own—toward a common goal of bringing emissions of carbon dioxide from burning fossil fuels essentially to zero.

But how to do it, and how fast, are still unresolved—as is the role to be played by one of the biggest polluters, the United States, now that President Donald Trump has signaled its withdrawal from the pact.

Meeting more ambitious emissions targets is do-able, the report said, but it will require major scaling back of coal and ramping up of renewable energy, including wind and solar.

The report urges a phasing out of existing coal plants and not building new ones. The authors note that there are nearly 6,700 coal-fire plants in the world, with a combined capacity of nearly 2,000 gigawatts. As of this year, more than 800 gigawatts of new capacity was either in construction or in the planning stages, much of it in China and India. “Without additional policy interventions, the number of coal fired power plants will continue to increase,” the report said.

There is some progress on this front. Last week, Italy announced plans to phase out coal power plants by 2025, following a challenge from the UK and Canada, which plan to stop using coal-fired power by 2025 and 2030, respectively. France plans to do the same by 2022.

The report also emphasizes opportunities for mitigating carbon emissions—much of those already achievable and relatively inexpensive. These opportunities, the report says, largely come from solar and wind energy, more energy efficient appliances and cars and replanting forests or stopping deforestation. Altogether, these sectors could reduce carbon dioxide emission by up to 22 gigatons a year.

Carbon removal—much of it through agricultural practices that better manage soil carbon or through forest preservation—can also play a big role, the report notes, with the potential to remove up to 12 gigatons of carbon a year.

The report also notes that “subnational” efforts, including those taken by corporations or states—such as the “We Are Still In” initiative and the Northeast’s Regional Greenhouse Gas Initiative—have major potential above countries’ INDCs.

“This is potentially a significant contribution to closing the gap,” the report says. “Comparable and transparent reporting” will be essential.